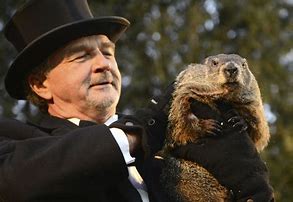 The nation’s long-time weather expert, Punxatawny Phil, did not see his shadow this morning.  Thus, he predicts that winter should come to an end in about six weeks.  Hooray!

In Atlanta this week, the National Football League’s Commissioner, Roger Goodell, made his annual “state of the league” address to a large gaggle of reporters just as eager to hear some real news about recent issues in the NFL.

Like Bill Murray’s daily repeating of the same events throughout the movie Groundhog’s Day, Goodell annually (painfully) goes in front of the media during Super Bowl week and, for the most part, gives them the same bob-and-weave shtick over and over again.

“Groundhog” Goodell (who seemingly shies away from the bright lights more than the popular Punxatawny Phil) stepped-up to the microphone on Wednesday and dazzled (sarcasm included) the reporters with vanilla information and artfully played dodge ball with anything remotely controversial (especially involving the New Orleans Saints’ NFC championship game).

A chorus of respected Saints players said, “Not TrueDat!”  According to the Saints players, Roger Goodell may be related to Pinocchio.

New Orleans’ retiring tight end, Benjamin Watson, wrote a personal letter to the Commissioner (no response yet).  Watson tweeted, “and he has all my contact info.”

Future Hall-of-Fame quarterback, Drew Brees, said he had not heard from the league about the NOLA No-call, either.

“It’s the commissioner’s responsibility to represent the NFL, and yet we don’t hear a peep for 10 days,” he said. “And it’s because he has to do it now because he’s at the Super Bowl and he does his annual press conference.”

Despite his skill at providing evasive answers, “Groundhog” Goodell is not an attorney.  He majored in Economics in college and was smart enough to snare a $40 million/year gig as the Commissioner for the NFL.

In a nutshell, his job is to be the designated shock absorber for his 32 franchise owners.  He is paid to take a licking and keep on ticking while protecting and increasing the value of his bosses’ franchises.

His employers apparently feel that Goodell does that part of his job quite well.

Meanwhile, Saints fans in the city of New Orleans continue to make preparations for their very unique Boycott Bowl on Sunday in a way that few cities in America could ever do.

By throwing massive citywide parades and parties, of course!

While most of America will likely tune-in to watch at least a portion of Sunday evening’s “big game’, WhoDatNation’s fervent Saints fans plan to turn their back on the televised game en masse.

As Saints fans emerge from their recent depression over the infamous no-call which likely prevented New Orleans’ beloved football team from being the NFC’s representative in Sunday evening’s game, the resilient city’s loyal Saints fans will send their own message to “Groundhog” Goodell on Sunday with a day full of musical celebrations, parties, and a massive tune-out of the televised football game.

One Saints fan summed it up well.

“New Orleanians are identifying like the way we did when we won the Super Bowl. Everyone in New Orleans loved each other then. Now, it’s like we’re all unified in our anger, and we’re working it out with our humor.”