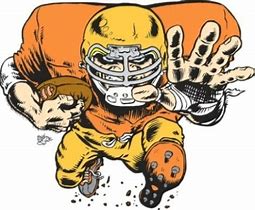 For those who are not familiar with Fantasy Football, groups of people get together to form a league of (usually) six to 12 teams filled with various players from all 32 NFL teams.  Each Fantasy Football franchise owner has a goal of assembling an All-Star team of (hopefully) the most prolific scorers in this year’s NFL season.

You will do likewise for running backs (select at least four in your Fantasy Football draft and play two of them each week of the regular season), wide receivers (select six/play three each week), along with tight ends, place kickers, and defensive teams (select two of each in your draft and play one at each position each week).   Most leagues have an extra “wild card” position (where you may utilize a remaining running back, wide receiver, or tight end) where you can play an extra player based on your best available bench player.

Each player’s on-field performance every week is translated into Fantasy Football points.  All players receive six points for a touchdown, but yardage gained for each position also translates into points, too.  For kickers, most leagues award one point for an extra point and field goals are assigned points based on the distance of the kick.  Defenses can also score points for touchdowns and are awarded points for sacking the quarterback, interceptions, and fumble recoveries.

Once your team is selected on your Fantasy Football draft night, you will have to trot out a line-up card every week based on your decisions as to which players will score the most points in particular week.  As in real life, the most successful Fantasy Football team owners are generally the ones who invest more of their personal time in keeping up with their team (watching for key injuries, “bye” weeks for each team, and the like).

It’s a lot like gardening, your golf game, and raising your children.  The more time and effort you put into it, the better the likely outcome!

In effect, you have become both the general manager and the coach of your Fantasy Football team.  You must make decisions on the best players to “hire” for your Fantasy Football team (essentially the same function of an NFL GM) but then you have to make weekly decisions on which players have the best chances to score the most points for your team every week (such as an NFL coach would have to do each week based on injuries or match-ups).

This year marks the start of my second decade of playing in a Fantasy Football League comprised of some former co-workers and a few college buddies of my former boss.  The league is purely for fun (no money involved) which makes for a much less stressful season for everyone.   Let me explain.

I am famously cheap (in case you hadn’t figured that out yet), and I absolutely hated my one and only season playing in a Fantasy Football league back in 1981 where money was on the line.  For a moderate up-front investment of $100 to be awarded a “franchise”, my lovely wife had to endure my sudden outbursts on Sunday afternoons as the television showed NFL highlights of another team’s player scoring a lengthy touchdown.  I would lament how many dollars that play had cost me.  Each week was a stomach-turner for me.  I was miserable for months, lost about $75 for the season, and will never EVER play Fantasy Football for money again.

I call this the “Casino Factor”.  If you like to do a little wagering and can stomach losing some money, then you already know your financial limits.  As for me, I have yet to ever set foot in a casino and could care less about Las Vegas.  As Clint Eastwood famously said in one of his Dirty Harry movies, “A man’s gotta know his own limitations”.

Just like every NFL football team, you will start out the Fantasy Football with dreams of your Fantasy Football team winning the league championship.  In my case, I have won our league just once in ten seasons.  In further demonstration of my lack of Fantasy Football prowess, my team (called “SwampGas”) has posted a career record of 75 wins, 77 losses, and one tie heading into my 11th year.  That’s 49.3% winning percentage.

Perhaps I should change my team’s name to “Mr. Mediocity”?

I guess much of my mediocrity as a Fantasy Football owner has to do with my allegiance to my favorite football teams.  This year will mark my first without New Orleans Saints quarterback Drew Brees on my roster as Brees finally retired at age 42.  As a Saints fan, I like to have a few of their players on my roster just to feel connected.

I also avoid drafting players from teams which I really don’t care about.  Yes, I have never had a Dallas Cowboys player on my fantasy roster.  As a long-time Pittsburgh Steelers fan since the 1970’s, Dallas’ claim to be “America’s Team” really got under my skin back then, and I still haven’t changed my feelings about the team with the big blue star on the helmet.

Yes, the biggest problem with my fantasy football team is always that old guy in charge.  Me!

Let me close this Fantasy Football discussion with one area of relative success which I have consistently enjoyed over the years.

I have been able to draft one or two rookie wide receivers and running backs in the later rounds of the draft every season with some great success.

Most of the printed Fantasy Football guides available at your local grocery store are printed in the spring and do not contain much (if any) information about the rookies selected by each team.  The door is wide open for you to grab one or two valuable players who might be overlooked by the rest of your fantasy football league – if you are willing to do a little bit of homework.

Before your Fantasy Football draft, check some of the preseason statistics for several of your favorite NFL teams. If you can identify a rookie wide receiver or running back with a few touchdowns or solid statistics, save one or two late round picks for these players after the so-called “best” players have been already been selected.

You can thank me later.

Good luck to your Fantasy Football team this season.   Have some fun!