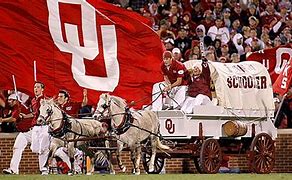 Thanks to Texas A&M’s incredible rally to beat Alabama on Saturday night, the Crimson Tide is no longer the top team in our weekly SwampSwami.com College Football Top 25 rankings through the week ending October 9, 2021.

Though fans of the two-loss Aggies are likely still whooping it up in College Station on Sunday, Texas A&M will not be joining my Top 25 grouping this week.

There is no doubt that the Texas Aggies are one of college football’s “best” two-loss teams.  In my poll, undefeated teams take precedence over one-loss teams, and the one-loss squads are ranked ahead of any two-loss teams.

Let’s take a closer look at Texas A&M to discover why I feel that way.

Texas A&M had already lost two games prior to their surprising upset win over Alabama on Saturday night.  The Aggies lost at 4-2 Arkansas by a score of 20-10 and also dropped a home game the previous Saturday to 3-2 Mississippi State by a 26-22 margin.

Is it possible that perhaps Alabama isn’t as good as their record indicated in 2021?  Remember, the Tide barely escaped 4-2 Florida with a narrow 31-29 victory.   Though Alabama still has a ton of talent, don’t forget that Nick Saban hired a guy named Bill O’Brien (yes, that same man who has single-handedly wrecked the Houston Texans’ NFL franchise over the past several years) to be the Crimson Tide’s offensive coordinator this season.

In addition to having “Wrong Way” O’Brien as the skipper of the offense, Alabama has a new quarterback at the helm in 2021, too.  My eyeball test says that this season’s Tide offense does not run at the same high octane efficiency as recent national championship teams.  The same can be said for Alabama’s stingy defense.  Though still quite talented, Bama’s defense has given up over 20 points per game through the first six games.

If you have watched Georgia play football this season, the biggest difference between those two SEC perennial powerhouse teams is on defense.  Georgia’s incredible D has given up less than 6 points per game (5.5 ppg to be exact) and would might make a nice upgrade for a few NFL teams right about now.

There are now 13 undefeated teams remaining in the 130-team FBS “large” school division.  That’s just 10% of the field.  In my poll, those 13 teams hold the top 13 spots with teams ranked in the final 2020 year-end poll receiving top billing as they still have not lost a football game in 2021.

After the unbeaten 13 teams, there are another 21 college football teams this week with just one single loss after week #6 of the regular season.

For comparative purposes, my SwampSwami.com College Football rankings puts two-loss Texas A&M at #37, Texas at #43, Florida #44, and Arkansas at #45.   My rankings are determined, in part, by each team’s best win of the season and that opponent’s current record.  Wins over one-loss opponents carry the most weight, while road victories are given more credit than home field victories.

I do not attempt to quantify losses.  In my opinion, unbeaten teams should receive more credit than any team which has lost one or more games already.  When an unbeaten team finally does lose, they should be evaluated against all of the remaining one-loss teams.  Any ties are broken by giving more credit to road wins (vs. home wins) and the margin of victory in that game. 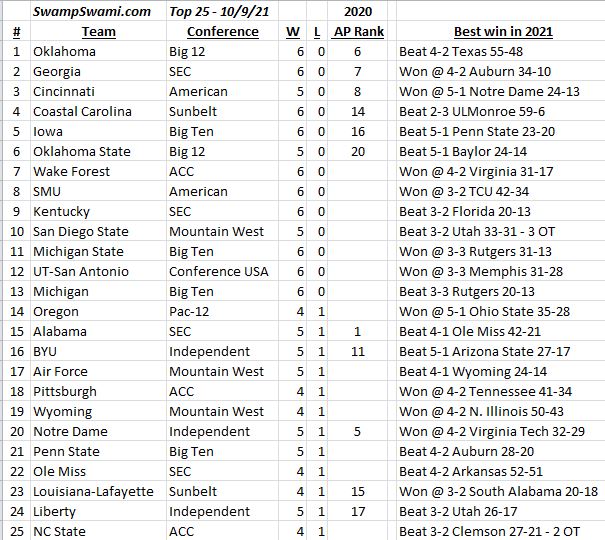