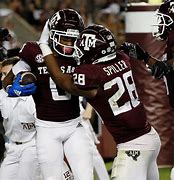 Did you watch any college football on television last Saturday?  If not, shame on you!

In the early games, the match-up between the SEC’s Arkansas Razorbacks and Ole Miss Rebels was one for the ages.  Arkansas scored the potential game tying touchdown on the game’s final play in regulation and opted to go for a 2-point conversion (on the road) to win the game outright.  The 2-point try fizzled, and 60,000 Ole Miss Rebel fans exhaled a collective sigh of relief as the home team held on for a 52-51 barn burner to move to 5-1 on the year.

Or, did you watch that OTHER early game last Saturday?   You know, the annual Red River Shootout which matches the Texas Longhorns against the Oklahoma Sooners in a game played every year during the Texas State Fair in Dallas at the Cotton Bowl.  In this year’s game, Texas jumped out to a surprising 14-0 lead – just two minutes into the game!  In the end, OU scored the winning touchdown with three seconds left to escape with a 55-48 win in this annual rivalry game.

Or, how about the afternoon encounter between two undefeated Big Ten teams matching Penn State at the University of Iowa?  In typical Big Ten fashion, this game didn’t feature scoring akin to a basketball game like the others just mentioned.  However, Iowa’s loud and rowdy fans helped to rally their Hawkeyes late in the fourth quarter to grab a 23-20 win over the Nittany Lions.

Or, did you happen to watch the CBS Saturday night game between unranked 3-2 Texas A&M and #1 Alabama from College Station, Texas?  The Aggies jumped out to an early lead.  As expected, Alabama slowly crept back into this game and grabbed their first lead with just five minutes to go in the fourth quarter.  At the urging of the boisterous A&M crowd of nearly 107,000 fans, the Aggies roared back to tie the game with three minutes left.  Then, Texas A&M kicked a dramatic walk-off field goal to win the game 41-38 and send Bama to its first loss in the last 19 games.

From 11AM Central to nearly 1 AM Sunday morning, NCAA college football games were being played around the country featuring some incredible drama and one great play after another.

NFL Commissioner Roger Goodell and his merry band of 32 pro football franchise owners may want to keep a closer eye on what may be coming up from behind in 2021.

There is no doubt that the NFL remains the king of all televised sports.  It isn’t even close.

With familiar and rising stars displaying incredible athletic ability on the field every Sunday, professional football’s annual appeal is like a fall soap opera for many sports fans.  When you add in 2021’s return to real, live football fans in the stadiums, this year’s NFL’s television ratings are showing a slight reversal in declines seen over the past few seasons.  According to a recent story, television viewership is up 3% this year over pre-COVID 2019 ratings.

The NFL’s television ratings are the equivalent of King Kong swatting away those pesky airplanes from atop the Empire State Building.  The NFL Sunday night games, the weeks of playoffs, and the annual Super Bowl are nearly always the most watched sporting events every year.

Other than a World Series Game 7, college football’s BCS playoffs and a few of the traditional New Year’s Day bowl games follow right behind pro football in snagging the largest number of television viewers.  Though the NFL’s Super Bowl routinely captures 100 million TV fans for the big game, college football’s top games can reel-in about 1/3 of that number.

Before you think that 30 million viewers sounds like chump change, that number is nearly ten times larger than the audience of your favorite non-sports weekly television show in 2021.  That’s how fractured the television market has become for any broadcast event not named football.

On Saturdays, college football is now literally everywhere on your television.  I truly do mean EVERYWHERE, too.

This Saturday, October 16, if you’d like to watch Georgia Southern at South Alabama, you will find it on ESPNU.  What about Toledo at Central Michigan?  Yep, it will air Saturday at 1PM on ESPN+.   Even 3-2 Utah State at 0-5 UNLV will be televised at 6PM on the CBS Sports Network.

Believe it or not, EVERY SINGLE major college football game involving the 130 BCS (large division) group of teams is on television every single week this fall.  That is, if you are willing to pay for the most expensive cable or satellite television package in your market.

Saturday’s have become a literal cornucopia of college football for fans who want to catch a televised football game each weekend in the fall.  There is even a 3-hour pregame show on ESPN and Fox every Saturday morning before the first televised kickoff at 11AM Central.  You don’t have to look very hard to find televised college football coverage any Saturday in the fall of 2021.

Why?  It is because even the most inconsequential college football game on television delivers enough prime viewers so that willing advertisers will spend money trying to peddle their wares to this actively engaged buying market.

Think of all the commercials you see during football games for beer, automobile, insurance, and food companies, for example.  You wouldn’t see those commercials if the sponsors didn’t think you were willing to buy their products.

The television networks continue to bid-up the prices paid to even the least popular college football conferences.  That’s another reason why these same networks will take a three minute television timeout just about every time a football player stubs his toe or has a cramp on the field of play.

With four 15-minute quarters in a college football game, there is less than two hours of actual time spent related to the competition down on the field.  The remainder of the now 3 ½ hours of time you spend watching college football includes an additional 60 to 90 minutes of commercials.  And don’t forget the number of spots you will be forced to watch during the network’s halftime highlight zoo.

It’s the price football fans pay for the privilege of watching the games on television in 2021.

As for me, this college football fan is willing to donate a few dollars to any network willing to cut out their halftime studio shows and allows me to watch the college marching bands perform their entertaining halftime shows (without commercials) as the network may scroll the scores from other football games quietly scroll across the bottom of my television screen.

College football on television is hotter than ever in 2021.  The games are exciting, the crowds have returned and are loud and engaging, the bands keep it lively, and the fans at home can watch one or more games on television nearly all day every Saturday in the fall.

Who needs the NFL?  I’ll take Saturday college football games over the NFL any time!