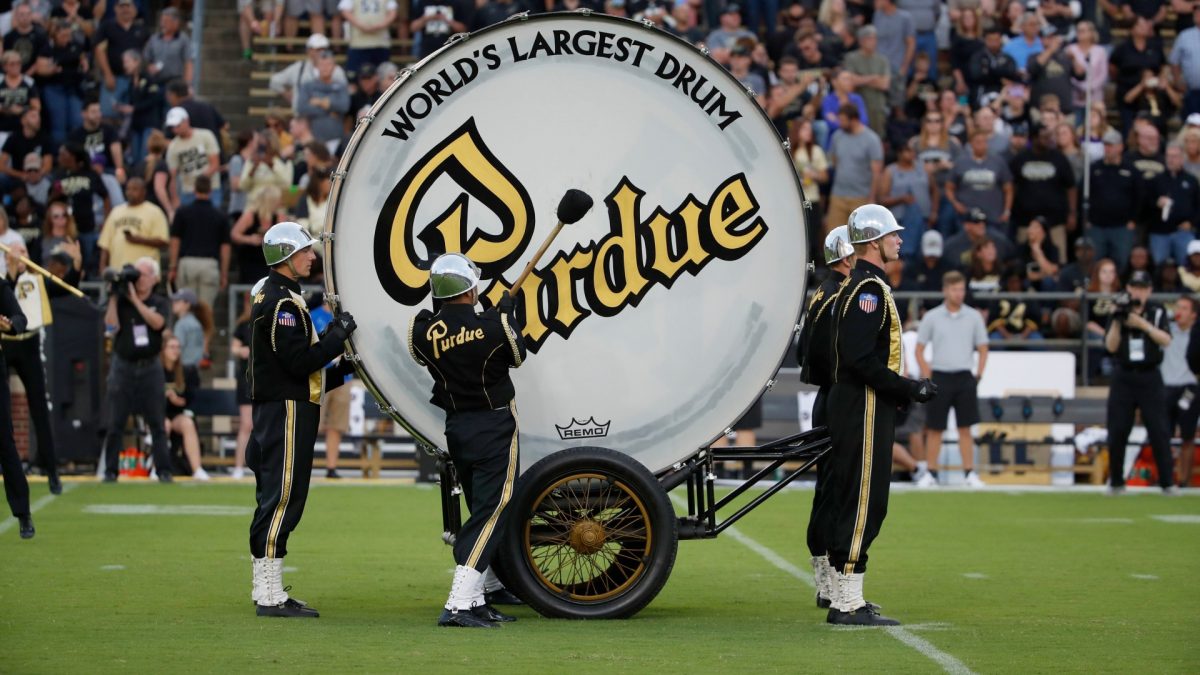 The Purdue University Marching Band has toted this 10-foot tall, 565 pound giant percussion instrument known as “The World’s Largest Drum” to home and away football games going back to 1921.  The World’s Largest Drum is 100 years old this year, and the university’s marching band will be proudly toting their beloved bass percussion instrument around the country as it makes the rounds for its centennial birthday celebration.

Except for today inside of Notre Dame’s football stadium, that is.

The Fighting Irish apparently have something against The World’s Largest Drum.  The Notre Dame Athletics department has a new tradition to force the opposing football team and, yes, even their visiting marching band, to enter the field of this beloved (but rather ancient) football stadium via a separate visitor’s entrance.

According to a report, “Notre Dame Athletics has restricted use of their main tunnel to their own football team and band, which is the only entrance large enough for the giant drum. We have been told that visiting teams and bands must a separate tunnel that is much smaller.”

Apparently, The World’s Largest Drum is too large to fit through the visitor’s designated entrance onto the football field of the legendary stadium.  I guess Notre Dame’s puny tunnel will prohibit 10’ tall, 565 pound opponents from entering the facility.

*Note to Nick Saban at Alabama – do not accept an invitation to play at Notre Dame before checking to see if your offensive and defensive linemen will be able to fit through this puny  visitor entrance!

Apparently, the ND Athletics Department then instituted a new “separate but definitely not equal” entrance policy for all members of the opposing team – including the other team’s marching band, too.

For Purdue, this new (and very odd) policy at Notre Dame’s football stadium has created a special issue for The World’s Largest Drum, too.  Purdue’s humongous drum does not fit through this visiting team’s tiny entrance onto the field of play.

Purdue’s last visit to South Bend, Indiana came in much friendlier times in 2012.  The World’s Largest Drum, like Purdue’s football team and marching band, was allowed onto the field via the same entrance as Notre Dame and its own band used.

Not so anymore.  Purdue fans must be wondering, “Where is OSHA”?

With the incredible number of Occupational and Safety Health Administration regulations which business owners have to navigate to provide safe and equal access to their facilities, it would seem that Notre Dame’s new visitor entrance might discriminate against some people/things.  In this particular case, it would be extremely tall and large people (or large objects…such as gigantic drums).

Hey, what about age discrimination?  After all, this drum IS 100 years old and should be afforded equal access based on its advanced age!

The World’s Largest Drum has not missed a Purdue football game (home or away) since 1979.  Purdue marching band members load their favorite bass drum onto the back of a pick-up truck and drive the truck and the much beloved drum to football games all across the country.

Even today at Notre Dame, the Boilermaker faithful will still get a glimpse of the cherished World’s Largest Drum as the marching band (barring a last-minute gesture of kindness from the Fighting Irish athletics department) will be forced to perch their 100-year old  gigantic drum just outside of the football stadium for fans to admire.

This issue can be easily resolved if the University of Notre Dame wants to do so.

In the year 2021, you would have thought that Notre Dame’s student body (which leans toward inclusion like most college campuses in America) would be quite tolerant about this apparent shunning of The World’s Largest Drum from the football field and game today.

According to one television station’s report, a Notre Dame graduate student was quoted as saying, “We might honestly be trying to get under their skin a little bit, which I don’t mind. We need to win by more than two touchdowns.”

Aha!  So, there is the real reason why the Purdue marching band’s World’s Largest Drum is not being allowed onto the field of the Notre Dame football stadium.  Purdue’s football team is 2-0 already, so the home team Fighting Irish (who are also 2-0 but have survived two very close games to open the season) may be a little bit scared of their in-state rival Boilermakers.

This just seems to be quite silly and a bad idea, Notre Dame.

Purdue’s fans, marching band, and the football team will be boiling mad by kickoff time on Saturday.

Sometime soon, Notre Dame’s athletics teams should not be surprised to learn that, on their next visit to the Purdue campus in West Lafayette, Indiana, the school’s athletics department may have implemented a ban on leprechauns along the sidelines during all sporting events held on Purdue’s campus.

If Notre Dame doesn’t capitulate at the last minute and allow The World’s Largest Drum onto the football field Saturday, then Fighting Irish fans should not expect to beat the rap as they snare the wrath of Purdue fans from this day forward!