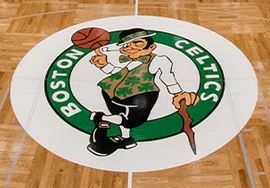 By the time their frustrating basketball season came to an end last night for the NBA’s Boston Celtics, the hometown Beantown fans were no longer saying “In Ainge, we trust!”  It was more like, “Get dat bum outta heah!”

Boston’s season ended Tuesday night with a 123-109 loss to the Brooklyn Nets in the first round of the NBA playoffs.   The Celtics lost the series by a 3-1 game count.  Their only win came in Game 3 played in Boston after an impressive 50-point scoring effort by forward Jayson Tatum.

Today, literally hours after the season ended, team General Manager Danny Ainge announced his retirement from the Boston Celtics.  At age 62, it isn’t a huge surprise that Danny Ainge was ready for a change from his high stress position.

The fiery Ainge has embodied the Celtics spirit as a player and, later, a team executive.  He was selected in the second round of the NBA draft 40 years ago in 1981 out of Brigham Young University by Boston’s legendary General Manager, Red Auerbach.   He played for 14 years in Boston before returning back to the team in 2007 to become the Celtics’ new General Manager.

The bigger surprise news today was that the current Celtics head coach, Brad Stevens, is being promoted into Danny Ainge’s front office position in Boston.  Brad Stevens, who was hired by Danny Ainge, was apparently not happy in his current coaching roll after leading the team to the Eastern Conference finals three times during his seven years as head coach.  Stevens, who is only 44 years old, came to the Celtics after a very successful college coaching career with Butler University in Indianapolis.

No, this wasn’t exactly the year that the Boston Celtics organization or their fans had in mind.

It was bad enough that the Celtics, who were expected to contend for the NBA’s Eastern Division title this year, finished the regular season with a mediocre 36-36 record for eighth place.  The C’s had to win a play-in game at home against a mediocre Washington Wizards team.  Fortunately, Jayson Tatum hoisted-up his first 50-point game to help Boston advance.

The first round playoff opponent in Brooklyn is a stark reminder to Boston fans of what might have been if things had gone right for former Celtics player-turned-General Manager Danny Ainge.  The Nets have raided rosters around the league to bring Kevin Durant (Warriors), James Harden (Rockets), Blake Griffin (Pistons) and others to join Kyrie Irving on the team in the past year.

New GM Danny Ainge helped to bring the Celtics their 17th world championship in 2008 after he added a couple of veteran players in Kevin Garnett and Ray Allen to the Paul Pierce-led Celtics.  Unfortunately, Boston (which is accustomed to raising championship banners at their home arena) has failed to win another championship during the ensuing thirteen seasons.

A few years after that championship, dealmaker Danny Ainge eventually shipped away the most valuable pieces of that Celtics team.  In return, he received several high future draft picks for his aging star players.

Dealmaker Danny Ainge was known as a gutsy NBA player, and he has made his share of risky moves on the free agent market over the past decade.  Sadly, many have crashed and burned.

Ainge sprinkled in players such as Sacramento guard Isaiah Thomas, Utah forward Gordon Hayward and former Cleveland guard Kyrie Irving.  For a variety of reasons, the same Danny Ainge later dealt away those same players in return for (you guessed it) more future top-level draft picks.

The prevailing sentiment in Boston has been that Ainge and the Celtics were positioning themselves to utilize this annual stockpile of first round draft picks as bait.  They have been hoping to lure another NBA team into trading one of the league’s biggest stars.  Names such as Kawhi Leonard or Anthony Davis had been rumored in trade talks with Boston over the past few years.

Danny Ainge seemed to be losing his vaunted Celtics’ leprechaun touch as he has struggled to put the right mix of free agents on the court in Boston in recent years.

As the Celtics dropped the first two games in their first round playoff series with the Brooklyn Nets, former Celtics free agent acquisition Kyrie Irving dropped a bomb which might help explain why some big name stars haven’t wanted to come to Boston.

As Kyrie Irving prepared to face the hostile Boston fans for the first time in the playoffs, he lobbed this bombshell last week:

“I’m just looking forward to competing with my teammates and hopefully we can just keep it strictly basketball, there’s no belligerence or any racism going on. Subtle racism and people yelling s*** from the crowd. But even if it is, that’s just the nature of the game, and we’re just going to focus on what we can control.”

A reporter asked Irving if he had experienced racism in Boston before, “I’m not the only one who can attest to this. It is what it is. The whole world knows it.”

Boston Celtics GM Danny Ainge responded by saying he had “never heard any of that, from any player that I’ve ever played with in my 26 years in Boston. I never heard that before from Kyrie and I talked to him quite a bit.”

During the first of the two weekend games played in Boston last Friday, Kyrie Irving was booed loudly as he took the court and every time he touched the ball.  His Brooklyn Nets team lost Game 3 and Irving made a woeful 6 out of 17 shots from the field as Boston won 125-119.  Two days later, though, Irving’s Nets came back in Game 4 to blast the Celtics 141-126 as Irving scored 39 points.

After the game, Kyrie Irving shook hands with a few teammates and then walked out to midcourt in Boston Garden.  He was caught on camera as he purposefully stomped his foot onto the eye of the Boston Celtics’ painted leprechaun logo!  Gasp!

Let’s pause for a little history lesson on the Boston Celtics’ leprechaun logo.

Legendary coach and General Manager, Red Auerbach, did his best to advance the lucky leprechaun theory while the C’s were dominating the NBA during the late 1950’s and the entire decade of the 1960’s.  The cigar-chomping Auerbach knew that the Celtics’ had their share of secret weapons – even his own brother.  Zang Auerbach was credited with creating the famous Celtics’ leprechaun logo in the 1960’s and named him “Lucky the Leprechaun“.  During the Auerbach era, Boston’s basketball success certainly was more “good” than lucky, but it never hurts to have a little extra mojo on your side.

Stomping on the Celtics’ leprechaun logo is considered as disrespectful as someone stomping on the midfield Texas Lone Star logo of the NFL’s Dallas Cowboys.  You are inviting trouble.

After Irving stomped on the Celtics logo, he turned to walk off the court toward the locker room.  As he exited the court, a plastic bottle of water was hurled toward him by an angry fan seated in the nearby stands.  Fortunately, the water bottle missed Irving, but the mainstream media (who conveniently seem to forget there are usually two sides to most stories) generally omitted the part where several Boston fans noticed Irving’s disrespect of the Boston home court logo.

Kyrie Irving was wrong to do what he did (and he has not commented on it).  For Boston’s water bottle tossing fan, he was quickly identified, arrested, and has been banned from arena.  By continuing to advance a story that Boston is a racist city, there isn’t much that Danny Ainge or anyone else can do in today’s society if those perceptions (right or wrong) are painted in a certain way by some within the media.

It certainly won’t make it any easier for Boston to lure black NBA stars to town after this weekend’s highly publicized incident.

As a General Manager for the Boston Celtics, Danny Ainge has done a solid job for most of his 14 years.  He deserves much credit for helping to return the Celtics to basketball relevance and keeping the team quite competitive most every season.  He was also responsible for hiring Brad Stevens for the team’s head coach, too.

After all of the recent ugliness associated with the Celtics’ season-ending losses to Brooklyn this past week, Danny Ainge likely preferred to exit the team on his own terms.  He said, “I trust my instincts, and my instincts told me a couple months ago that it was time for me to move on, and that’s what’s best for us, that’s what is best for the Celtics.”

For incoming executive and former Celtics coach Brad Stevens, he will soon be hiring his own replacement to coach the basketball team.  He must make some critical decisions about his current players and future roster quickly.

Boston Celtics fans are also hoping that Lucky the Leprechaun will wake-up soon and get back to work, too!