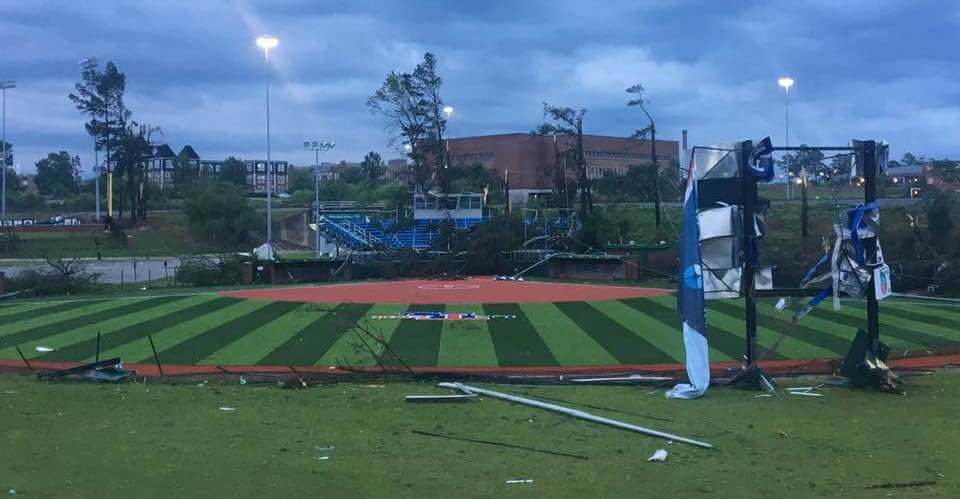 On Thursday, April 25, 2019 at 1:47AM in the north Louisiana city of Ruston, an EF3 tornado touched down inside the city limits.  The tornado was on the ground for nearly 7 miles and caused an incredible amount of damage to homes, businesses, infrastructure, and the landscape around the city and on the Louisiana Tech University campus.

The spring quarter was in session at Louisiana Tech where about 12,000 students attend.  Fortunately, this unexpected “middle-of-the-night” springtime tornado missed the majority of the on-campus student housing and primary academic facilities.

The school was plunged into darkness, though, as 75% of the community lost electricity after power poles were destroyed by the incredible winds (up to 200 miles per hour).   The National Weather Service said that the tornado was about 1,000 feet wide (nearly a quarter of a mile) when fully on the ground.   Shocked drivers on Interstate 20 would see entire motels, gas stations, and restaurants on both the north and south side of the freeway destroyed by the tornado.

Though about 350 homes and local businesses in the Ruston area were destroyed, only two people were killed (by a tree falling onto the house of a woman and her 14-year old son) as this powerful tornado roared into and through this quiet community.  Over $30 million worth of infrastructure in Ruston and at Louisiana Tech University were destroyed in just a few minutes as the tornado ripped through town.

As morning dawned, Louisiana Tech officials quickly discovered that the path of the tornado did not miss several of the athletic facilities on campus.  Though the football stadium was spared, the men’s baseball stadium, women’s softball complex, and the university’s soccer facilities were all heavily damaged.  A strip of metal from the softball stadium was found about 9 miles northeast of the Tech campus!

The men’s baseball stadium (known as J.C. Love Field) was built in 1971.  The stadium’s upper deck of seating, the perimeter fencing, scoreboard, and light standards were literally blown to smithereens by the tornado two years ago.  The field itself served as a gigantic staging area as students and staff joined hands to help pick-up debris from the tornado and put it onto the baseball field.

After several long months of negotiating with insurance companies and private donors, Louisiana Tech was adequately funded to start a complete rebuild of their baseball facility in the same location (across the road from the football stadium).  Two years later, the new baseball stadium (which remains named J.C. Love Field) was opened in February with seating for about 2,000 fans.  Like LSU’s original Alex Box stadium in Baton Rouge, the Louisiana Tech baseball field features the town’s main railroad line running just beyond the outfield fences.

Having the daily train coming though during your home baseball games can be pretty cool, indeed!

In the season between the tornado and the stadium’s reopening, Louisiana Tech’s baseball team played their COVID-shortened 2020 home games at nearby Ruston High School.

On Friday, June 3, 2021, Louisiana Tech University will proudly host its first-ever NCAA men’s baseball regional tournament in Ruston.  To say that the Bulldogs and the community are excited is an understatement.  Tickets for the event were quickly gobbled up as Louisiana Tech will host a trio from North Carolina State University, the University of Alabama, and Rider University (from the Trenton, New Jersey area).

The host Bulldogs had a tremendous first season in their newly rebuilt ballpark.  The team won the Conference USA regular season and hosted the conference baseball tournament last weekend in Ruston, too.

The Louisiana Tech fans in attendance at the Conference USA tournament were every bit as rowdy and loud as downstate LSU fans can be.  Even though Tech would lose the final game of the C-USA tournament to Old Dominion in 10 innings, the Bulldogs’ exceptional record of 40-18 earned the team a chance to host the school’s first NCAA regional event this weekend.

In fact, Louisiana Tech (rated as the #16 seed out of 64 teams) will be the only Bayou State college baseball team hosting an NCAA regional event this weekend.  LSU, McNeese State (Lake Charles), and Southern University (Baton Rouge) will all hit the road for their opening weekend games.

The Bulldogs baseball team (which goes by the moniker “Diamond Dogs”) has no shortage of hitters as the team finished third in the NCAA in base hits and sports a team batting average of .308.  The pitching isn’t a pushover, either.  Louisiana Tech pitchers have hurled eight shutouts this season (2nd nationally).   Louisiana Tech (the #1 seed in this region) hosts #4 Rider on Friday night while #2 seeded North Carolina State goes up against #3 seed Alabama.

Louisiana Tech’s fifth-year head baseball coach Lane Burroughs came to the program after leading a turnaround in the baseball program at nearby Northwestern State University in Nachitoches.  The Demons went from 10th place to finishing second or third in Burroughs’ final years at the school.

When he was hired to become Louisiana Tech’s new coach five years ago, he said, “I am thrilled for the opportunity to be the head baseball coach at Louisiana Tech for a program with such a rich history,” Burroughs said. “This is the place I want to be and it is the right time for our family.”

Lane Burroughs likely never expected to see Louisiana Tech’s baseball stadium rebuilt when he took the job a few years ago.  After surviving the tornado of 2019 and having such great success on the field in Ruston, Coach Burroughs’ phone may start ringing from some of those larger schools with bigger athletics budgets very soon (such as a certain team in Baton Rouge which is now searching for a new baseball coach to replace Paul Mainieri).

At least for this weekend, it’s onward and upward for the Diamond Dogs of Louisiana Tech University.   Enjoy this special weekend, fans!