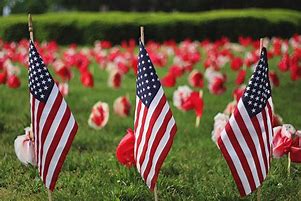 It’s Memorial Day today.  Unlike Armed Forces Day which honors those currently serving our country in the military or Veterans Day honoring all military veterans who have served our country, Memorial Day is the solemn day when we honor those who died while in service to our country.  It is celebrated on the final Monday in the month of May.

A few years ago, my wife and I spent a full day visiting the World War II Museum in New Orleans.  If you’ve never been, you are missing an incredible experience.  It is a very educational and entertaining (but quite respectful) way to learn about how the second World War began and how Americans participated around the world to end aggression.

Since this is a sports-themed site, I was thinking about how many sports facilities around the country have been called “Memorial” stadiums.  Many in professional sports are no longer in use today.  I remember places such as Baltimore’s Memorial Stadium – home to baseball’s Baltimore Orioles and the NFL Baltimore Colts.  There was Memorial Stadium in Cleveland.  Located along Lake Erie, the windy stadium was the longtime home of baseball’s Indians and the NFL Browns.

Do you remember Buffalo’s War Memorial Stadium?   This facility was the former home of the AFL’s Buffalo Bills.  Built by unemployed workers using federal WPA money during the Depression, the stadium opened in 1937 and apparently wasn’t exactly the finest use of federal tax dollars at the time.  Locals gave it the nickname “The Rockpile” due to the stadium being in disrepair during most of its existence.  One sportswriter said the stadium “looks as if whatever war it was a memorial to had been fought within its confines”!  Fortunately for Buffalo Bills fans, Rich Stadium replaced it in 1972.

Today, there are still a number of sports facilities which remain in operation around the country which were named in memory of our fallen military heroes.

Vanderbilt’s Memorial Gymnasium in Nashville was built in the early 1950s and was dedicated as a campus memorial to students and school alumni killed in World War II.  A plaque commemorates those fallen heroes in the lobby of the arena.  Though it might seem hard to believe today, there were serious discussions within the Vanderbilt community during the construction of the facility as to whether the school should de-emphasize intercollegiate athletics.

At the University of Missouri campus, the football facility is now called Favrot Field at Memorial Stadium.   Though initial fundraising began in 1921, the stadium wasn’t completed until 1929 and was named to honor those who sacrificed their lives in World War I.

Located just a few hundred miles to the south in Little Rock, Arkansas, the Razorbacks have played football games for many years at War Memorial Stadium which was opened in 1948 after World War II.  Former Razorback and Medal of Honor recipient, Maurice Britt, helped to dedicate Arkansas’ War Memorial Stadium in tribute of all the state’s patriots who have fought for American freedom.

Heading further south into Louisiana, we find LSU’s Alex Box baseball stadium in Baton Rouge.  Many SEC fans are familiar with the name Alex (pronounced Alec) Box, who became the first LSU athlete to die in World War II when his tank struck a mine in North Africa in February, 1943.  Later that year, Box’ name went on LSU’s baseball park and has remained through the historic baseball stadium’s final year in operation in 2008.  At that time, the name was then transferred to the Tigers’ new ballpark when it opened in 2009.

Moving west into the Big 12 Conference, one of the largest football facilities in the country today is the University of Texas’ Darrell Royal/Memorial Stadium in Austin, Texas.  When completed in 1924, the Stadium (dedicated in honor of 5,280 Texans lost in World War I) was called the largest sports facility in the Southwest with 27,000 seats.   After several expansions, the capacity of Memorial Stadium is more than 100,000 fans.  The stadium was rededicated in 1977 to honor all Texas alumni lost in every American war.

Heading north on I-35 across the state line to Norman, the Oklahoma Memorial Stadium was opened in 1923 in honor of university students and personnel who died in World War I.   Like its counterpart in Austin, the stadium has been upgraded several times and now seats nearly 80,000 Boomer Sooner fans.

Up north in the Big 10, there are several football stadiums honoring our fallen heroes.  The University of Illinois’s Memorial Stadium was completed in 1923 to honor the dead in World War 1.  The stadium was upgraded in 2002.  In addition to now honoring World War II alumni lost in battle, the majority of the stadium’s 200 columns now displays the name of the 183 former students lost during World War I.

Let’s end today’s post with those quotes noted on each corner of Nebraska’s Memorial Stadium: