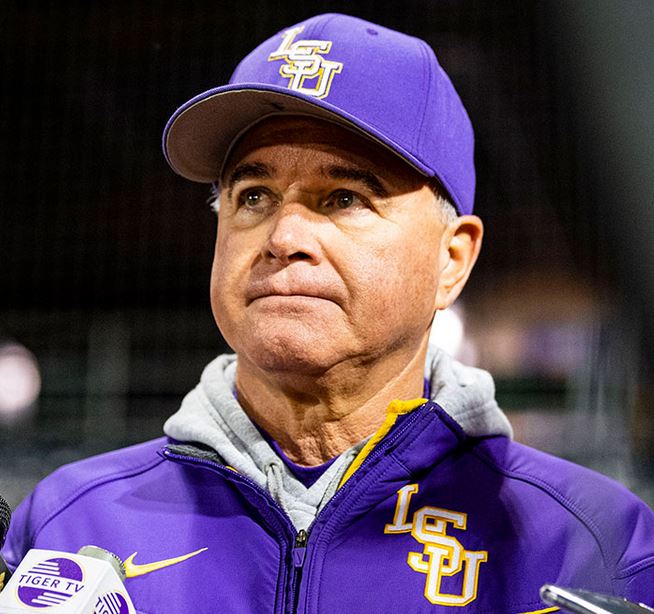 ***Update – On Friday, May 28 (two days after this was posted), LSU baseball coach Paul Mainieri announced his retirement at the end of this baseball season. On behalf of all baseball fans, “Thank You, Coach!” for a job well done!

One of the nicest gentlemen in the sport, Paul Mainieri became just the 7th coach in college baseball history to win that many games in a career.  As usual, he would not take credit for his milestone achievement:

“I haven’t won any games. It’s the players that have won the games.”

In Tuesday’s first game of the SEC baseball tournament, LSU lost to Georgia 4-1 and was bounced out of the league’s post-season tournament after just one game.  For those who follow SEC baseball, the Hoover Metropolitan Stadium usually looks like it is painted in purple and gold as thousands of LSU’s faithful fans trek to Birmingham expecting to spend the entire week watching their beloved Tigers chase another SEC baseball title.

In a big surprise for LSU fans, it was “One and done” this year as LSU’s baseball team was eliminated on the first day of play.

The LSU baseball team usually performs well enough in the regular season that the Tigers (regardless of how they perform in the SEC Tournament) usually have secured a home field berth in the first round of the NCAA baseball championships.  With a nearly unbeatable home field record during the NCAA tournament, LSU’s rabid fans have become accustomed to making their annual June trip to Omaha, Nebraska to watch their baseball team in the College World Series.  Coach Paul Mainieri’s Tigers have been to Omaha five times in the past 12 years as LSU came home with the championship trophy in 2009 and finished second in 2017.

The good people of Omaha have become so used to seeing LSU’s motorcade of purple and gold fans that the Tigers have generally been considered the “home” team in Omaha (unless the University of Nebraska or Creighton University are in the field).  The locals have learned to love partying and tailgating with thousands of fun-loving Tiger fans who annually migrate north to escape the Bayou State’s searing June heat and humidity.

Sorry, Omaha.  The Tigers are a long-shot to come north to your annual party next month!

LSU finished a very disappointing (by LSU standards) 2021 baseball season with the Tigers currently parked at 34-22.  The team’s SEC record was a dismal 13-17, too.  LSU’s chances for being awarded a spot in this year’s NCAA baseball tournament field of 64 teams are razor slim.

LSU isn’t even considered the best baseball team in their own state this season.  Louisiana Tech is currently ranked #18 in the country with a 36-16 record.  The Bulldogs are playing host to the Conference USA tournament this weekend in the Bulldogs brand new baseball stadium in Ruston.  Though LSU defeated Louisiana Tech twice during a couple of regular season encounters this season, the Bulldogs still remain a better bet to advance into the NCAA tournament this year.

OK, so it looks pretty bleak for LSU’s chances of playing in the NCAA tournament this year.  So what?  Aren’t they entitled to have an “off” year at some point?

In Baton Rouge, the LSU baseball team has been so good for so long that the locals now expect their team to be an annual contender for the national championship.

Just like the LSU football team, the Tigers baseball team has many very passionate fans.

The LSU Tigers baseball program is also big business.  Unlike the school’s other non-football sports, the baseball program can be counted upon to return a tidy profit into the athletics department bank account every year.

LSU baseball coach Paul Mainieri has been with the school since 2007.  He had the daunting task of following in the footsteps of another Hall-of-Fame baseball coach, Skip Bertman.  LSU’s previous coach won an incredible five national championships during his 18 years at the helm.  “The Skipper” built LSU’s baseball program into a national powerhouse.

During Bertman’s time as head coach at LSU, Paul Mainieri was winning over 70% of his games and grabbing a national “Coach of the Year” award during his 12-years as head baseball coach at Notre Dame.   He took the Irish (which wasn’t known as a baseball power) into the NCAA baseball tournament in nine of his dozen years in South Bend, Indiana.

Once Skip Bertman was moved into the Athletics Director position at LSU, Paul Mainieri got the call to come to take over his Tigers’ baseball program in Baton Rouge.  The team didn’t miss a beat as the likeable Mainieri charmed the media and fans alike as LSU’s baseball team kept on winning SEC championships and playing in the College World Series in Omaha.

By most every measure, Paul Mainieri has been incredibly successful as the head baseball coach at LSU.

With a nearly 70% winning record during 14 years as the head coach at LSU, Paul Mainieri is starting to hear the whispers that he is losing the magic touch.  Some supporters believe that it might be time for the coach to retire soon and turn the baseball program over to a younger and more dynamic personality.  Some believe that Mainieri doesn’t seem to possess the urgency required to get his teams to play at their highest level and return the LSU baseball team to its former glory.

Just like in other major college sports, successful baseball coaches are expected to be gifted recruiters in addition to great teachers of the game itself.  In LSU’s case, nearly every high school baseball player in America knows that playing college baseball for the LSU Tigers means a thrilling home field crowd will be there to cheer you at every home game.

According to reports, Coach Paul Mainieri’s contract with LSU is valid through the year 2024 and is valued at about $1.2 million per season.  LSU, whose entire athletics program has remained profitable due to the incredible financials generated by the football team, may not desire to pay-off their long-time baseball coach and send him packing just yet.  Remember that LSU Athletics Director Scott Woodward recently opened-up the Tigers’ wallet in order to sign the fiery Kim Mulkey to lucrative contract to coach the women’s basketball program.

With a losing record in the SEC regular season and a surprising first round exit in this week’s SEC Tournament, I don’t think LSU deserves to be playing in the NCAA tournament field to be selected soon.   However, the Tigers are a nationally known commodity and a big fan draw no matter what region they might be shipped-off to play.  The NCAA’s respect for the LSU program and Coach Mainieri may earn the Tigers one of the final spots in this year’s field.

Even if LSU is left out of the NCAA field next week, I think Paul Mainieri will be given one more season to coach the LSU Tigers baseball team.  Since the coach will turn 65 after the conclusion of next year’s college baseball season, it wouldn’t surprise if we heard him announce soon that he is planning to retire after one final season in Baton Rouge in 2022.   The pressure would then be off, and Coach Mainieri would be honored at every ballpark the Tigers play in all next season.

For a gentleman so universally liked and respected in baseball circles and with an incredible 1,500 wins as a college coach, Paul Mainieri has earned a chance to coach the LSU Tigers baseball team for one more season in 2022 before settling into his well-earned retirement (along with a very nice bonus which will likely come from a negotiated buy-out of his remaining contract).