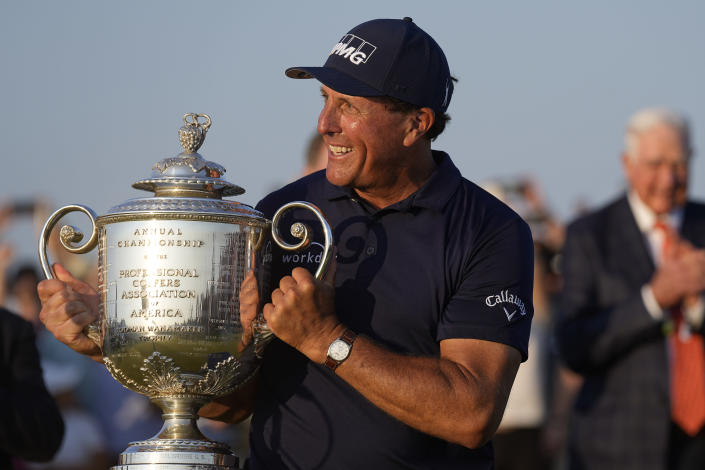 Watching Phil Mickelson when he is in contention to win any golf tournament is the sports equivalent of strapping yourself inside of an old-time wooden roller coaster.  Your ride will be filled with ups and downs, fast-paced gasps and thrills, and you’re likely to come out a little bit shaky but happy you took the ride with him.

Over the weekend, I watched every one of Phil Mickelson’s final 36 holes on television. The event was played at the PGA Championship on the brutal but brilliantly designed Kiawah Island Ocean Course alongside the Atlantic Ocean in South Carolina.   Like millions of other Mickelson’s fans, I sweated nearly every single shot Phil took over the weekend as he built a big lead and then gave back several shots while holding on for a two-stroke victory on Sunday.

On the front nine, Phil Mickelson had three birdies, three bogeys, and three pars on his card.  He made a mess out of the first hole as he three-putted for a bogey.  On the second hole, he redeemed himself with a birdie.   Down, up, down, and up again.  That’s Phil’s golf game!

As Phil Mickelson stood in the sand aside the par-3 fifth green on Sunday’s final round, the walking commentator following the group commented that Phil Mickelson’s sand shots have been less than his best in the past year.   Right on cue, Phil Mickelson lofted up a beautiful shot out of the sand, watched it float onto the green and then gently roll into the cup for a birdie.

“Phil-the-Thrill” has still got it!

When Phil Mickelson stood on the tee box at any hole this weekend, you were never sure whether you were about to watch him “bomb” another 300 yard drive down the middle of the fairway or send a quacking duck hook into the nearby lagoon or fade his golf ball into the sand dunes of Kiawah Island’s seaside links.  The lanky “Lefty” is 6’3” tall and his long, fluid golf swing can sometimes get away from him.

That’s one reason why Phil Mickelson has been such a fan favorite over his incredible golf career.  Everyone who has ever played golf knows that same feeling standing on the tee box and getting ready to hit their drive.  You hope your golf swing will be good enough to send the ball down the fairway, but many times the ball simply doesn’t cooperate.

When Phil Mickelson is “on” like he was this weekend at the PGA Championship, it seemed like each of us watching were thinking about our greatest day on the golf course, too.

When it was done, you felt as if you had worked just as hard as Phil did for the victory!

While the media is understandably making a big deal out of the fact that Phil Mickelson, who will turn 51 years of age in June, has just became the oldest major championship winner in men’s golf history (by two years), I’m ready to go for another roller coaster ride with him at the US Open in June!

Phil Mickelson won his sixth career major championship on Sunday by taking home the Wannamaker Trophy for the second time in his career.  Phil has already won three of golf’s four major championships and desperately wants to complete golf’s “Grand Slam”.  All that is missing in Mickelson’s trophy case is the US Open.

With his win on Sunday at the PGA Championship, one of Phil’s perks is now being exempt from qualifying to play in any PGA tournament and major championships he wishes to enter for the next five years.  Phil will be nearly 56 years old by the time all of those exemptions end.

The only people who weren’t happy about Phil’s win on Sunday were the golf tournament sponsors on the PGA Champions (senior) Tour.  It doesn’t look like Lefty will be playing with his old friends very often for the next few years.

Phil Mickelson has come incredibly close to winning the US Open before.  He owns the record of finishing second an amazing six times in the US Open.  He’s been “due” for more than twenty years.

As if yesterday’s thrilling PGA Championship wasn’t enough for golf fans, this year’s US Open will be played on Father’s Day weekend at the Torrey Pines Golf Course which is located just a few miles from Phil Mickelson’s home in San Diego, California.

That’s part of the fun of rooting for Mickelson as nobody (including Phil) knows what to expect when he tees it up week-to-week on tour.

Phil Mickelson doesn’t play golf in the robotic style which typifies most PGA professionals.  That’s not a knock on those other great golfers.  Phil Mickelson seems that he enjoys playing the game in his own special way – especially when he’s playing it at his best.

I’ve always compared Phil to Arnold Palmer as to his bond with golf fans.  Arnie told a young Phil Mickelson to acknowledge the appreciation of the golf fans, and they will love you back.

If you watched any of the PGA Championship tournament this weekend, the love for Phil Mickelson was enthusiastically provided by thousands of South Carolina golf fans in attendance.  He was cheered every step of the way all weekend.

As Golf Channel analyst and former professional golfer Justin Leonard said after Sunday’s win, “Phil is going to have to ice his thumb tonight after all of the thumbs-up acknowledgements he gave the fans out there today!”

After Phil Mickelson and playing partner Brooks Koepka hit their second shots on the 18th hole with Phil clinging to a two-shot lead, thousands of excited golf fans spilled onto the fairway to encircle the green.  It was reminiscent of what fans do on the final hole at the British Open each summer, but this time it was happening in South Carolina.

Though Mickelson would later say the experience of walking through the fans on his way to the 18th green was initially a bit concerning, he smiled as he waded through the sea of people before reaching the green.  The fans were genuinely amped to be in attendance as Phil “The People’s Champion” Mickelson completed this historic major championship win.

Afterwards, Phil was asked about how he could still play so well at age 50.

“I’ve tried to stay more in the present and at the shot at hand and not jump ahead and race. I’ve tried to shut my mind to a lot of stuff going around. I wasn’t watching TV. I wasn’t getting on my phone. I was just trying to quiet things down because I’ll get my thoughts racing and I really just tried to stay calm.”

Mickelson acknowledged that, as he gets older, he works harder on his game these days.  Off the course, he is doing more training and has been watching his diet closer than ever.  On the course, he continues to work on keeping his focus for all 18 holes.

Unlike so many professional golfers with back and knee issues due to swinging a golf club so hard for years, Mickelson knows that he has been fortunate to avoid major injuries.

Phil Mickelson’s achievement at age 50 in golf is reminiscent of football’s ageless Tom Brady, who quarterbacked the Tampa Bay Buccaneers to a Super Bowl win this year at the age of 43.  Tennis great Roger Federer has been winning at the highest level of his sport for two decades and will turn 40 this summer.

It is a joy to watch these winners compete.  It is not about the money as each of these professionals has plenty of that.  They thrive on the passion of playing their sport at the highest level of competition.  As long as they are physically able to compete, their mental skills can take them the rest of the way.

In Phil Mickelson’s case, he is having the time of his life and still thinks playing golf is fun!

After winning the PGA Championship trophy on Sunday, Phil Mickelson said that he is realistic and remains quite aware of how hard it is to win on the PGA Tour.

“It’s very possible that this is the last tournament I ever win”.

NBC and golf fans around the world sure hope not!

NBC will be lucky enough to be covering golf’s next major championship with June’s US Open at Torrey Pines.  The network’s sales department must be jubilant today with the thought of having Phil Mickelson in the mix again next month.  It could be a ratings and financial bonanza for NBC.

There is one thing we can be sure of.  As long as that fun roller coaster ride called Phil Mickelson is still on the tracks, we are guaranteed to see and enjoy a few more thrills again sometime soon!