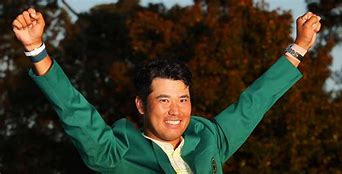 In case you missed it, Japan’s Hideki Matsuyama captured this year’s Masters golf tournament by one shot on Sunday.

According to a news source, there were a surprisingly large number of people who didn’t watch The Masters over the weekend.   The first major golf tournament of 2021 pulled a respectable 5.5 rating on Sunday and an estimated 9.5 million television viewers.   That marked the lowest number of final round television viewers since the 1993 Masters (won by Germany’s talented but generally stoic golf legend, Bernhard Langer).

The TV ratings were down, but it wasn’t due to the condition of America’s most beautiful golf course.

Augusta National Country Club looked like an “11” on a scale of 1-10 on television this weekend.  The azaleas were blooming and even your colorblind scribe could tell how much it brightened the views on so many of the televised holes.   Golf fans had a chance to see this lovely layout tucked in the rolling hills of northeast Georgia at its incredibly well manicured peak last weekend.

So, it wasn’t the golf course or the weather which didn’t fetch the usual number of television viewers for this year’s Masters golf tournament.  What happened?

Simple.  Sunday’s winner was Hikeki Matsuyama (who had just 5 PGA wins prior to earning his first major championship).  Next were Will Zalatoris (who dat?) in second, Xander Schauffele and Jordan Spieth in a tie for third followed by John Rahm, Marc Leishman, Justin Rose, and Corey Connors.

Though most viewers are familiar with Jordan Spieth and Justin Rose, the other names at the top of this weekend’s golf tournament are not as well-known to casual golf fans.

It didn’t help matters that Matsuyama had a four shot lead to start the day and, despite making a few key mistakes down the stretch, none of the golfers gave chase.  Though a vintage 1986 Jack Nicklaus-type of final round rally never materialized on Sunday, the door was left open for one of the challengers to make it a close finish.  It simply didn’t happen.

It was like watching a horse jumping far ahead of the field right out of the gate at the Kentucky Derby and then never seeing another horse give serious chase to catch him.  Yes, it made for exceptionally boring television unless you were rooting for the leader.

Swing-for-the fences golfer Bryson DeChambeau faltered on Sunday and finished at +5.  Phil Mickelson (now 50) and Justin Thomas both finished at even-par and a whopping ten shots back.   The 2020 Masters champion, Dustin Johnson, didn’t even make the cut to play on the weekend.

Tiger Woods never teed it up as he continues rehabbing from what could have been a fatal car wreck near Los Angeles several weeks ago.  Tiger is lucky just to be alive and his return to golf is unknown but well down the road.

With leader Hideki Matsuyama sporting a big 4-shot lead starting Round 4 at The Masters Sunday, a few of the pursuers mounted a brief challenge.  Just like watching Olympic skiers heading quickly downhill sporting too much momentum, each of Matsuyama’s challengers would crash at some point along the way and hand Japan’s new golf hero his first career major championship by a single shot.

The 29-year old Hideki Matsuyama is no fluke.  He had finished in the top six in each of golf’s four major championships.  He certainly earned the win and his Green Jacket on Sunday.

Though the Sunday afternoon conclusion of The Masters was bit of a snoozer, Hideki Matsuyama never lost the lead and became a very deserving first-time Green Jacket winner.