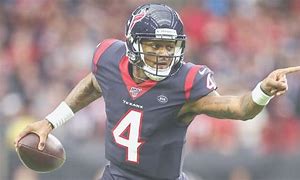 While playing quarterback for the Clemson Tigers, Deshaun Watson led his team to the national championship in 2016.  He established himself as a leader and a winner.

In the spring of 2017, Deshaun Watson was drafted by the NFL’s Houston Texans with the 12th pick in the first round.  The Texans gleefully learned what college football fans already knew.  Deshaun Watson was something special as both a quarterback and a team leader.

In the first month of his rookie season in Houston, Deshaun Watson came into a game from off the bench and has been the Texans’ starter ever since.  He started the next seven games including one game with an NFL rookie record five touchdown passes and another in which he passed for over 400 yards.  Unfortunately, Watson injured his right knee in practice late in the season and was done for the year.  In a 4-12 season, the rookie quarterback had started in three of the four wins.

Coming off the injury in 2017, Deshaun Watson established himself as the offensive leader of the Houston Texans.  In both 2018 and 2019, he led the Texans into the AFC playoffs with regular season records of 11-5 and 10-6.

Though Texans’ fans still thirsted for their first chance to make it into a Super Bowl, the team’s recent performances gave hope that better things were still ahead.

In March, 2020, the Houston Texans’ head coach and General Manager, Bill O’Brien, stunned the team, the city of Houston, and the NFL by trading the team’s 3-time All Pro receiver, DeAndre Hopkins, to the Arizona Cardinals for a banged-up running back (David Johnson) plus a second round and fourth round draft pick.

In addition to being (by far) the team’s best receiver in Houston, DeAndre Hopkins played his college football at Clemson just like his quarterback, Deshaun Watson.  It is hard to overstate the Clemson connection when assessing the loss of Deshaun Watson’s favorite target.

In order to smooth things over, the Texans backed-up the money truck in April, 2020 and signed Deshaun Watson to a lucrative 4-year $177 million new contract which is second in the NFL only to Super Bowl MVP Patrick Mahomes of Kansas City.  Watson’s contract guarantees him an incredible $111 million.

With the NFL draft looming for the Texans, their wealthy quarterback likely believed that the team would do everything possible to draft one or two new wide receivers or attempt to make a deal to sign another quality replacement for his departed Clemson buddy, DeAndre Hopkins.

When the Houston Texans’ name was called in the 2020 NFL draft last summer, the team (which had no first round pick due to a trade with Miami for an offensive lineman) picked once in the second round, once in the third, twice in the fourth round, and once in the fifth round.

They selected just one wide receiver – in the fifth round – by taking Isaiah Coulter from tiny Rhode Island University.   Though Coulter is still on the roster after his first season, his stats were written in invisible ink.  He never caught one pass this season for the Texans.

Instead, the Texans dipped into the free agency market and made a deal to sign wide receiver, Brandin Cooks.  Though only 27 years old, Cooks was drafted by the New Orleans Saints (played three years), was traded to New England (for one season), and then traded to the Los Angeles Rams.  After being dealt to Houston in 2020, Cooks now has four of the 32 NFL logos on his luggage.

After months of time for the Houston Texans to find new wide receiver talent to go with their All Pro quarterback Deshaun Watson, they only added a 5th round draft pick (who never played in 2020) and a mediocre (but expensive at $16 million/season) veteran receiver in Brandin Cooks.

After going 10-6 and making the playoffs in 2019, the Houston Texans limped out the chute in 2020 by losing their first four games.  The team’s ownership fired coach and GM Bill O’Brien and installed his 73-year old defensive coordinator Romeo Crennel as the interim head coach.  Crennel’s Texans went 4-8 the rest of the way as Houston finished with a putrid 4-12 record in 2020.

If you want to blame quarterback Deshaun Watson for this debacle, you would be (mostly) wrong.   The Houston Texans’ defense finished 30th out of 32 NFL teams so they shoulder most of the responsibility in 2020.  With Deshaun Watson throwing the football for an average of 302 yards per game, the team ranked #2 in the NFL in passing stats for the season.

After dealing All-Pro wide receiver DeAndre Hopkins to the Arizona Cardinals, the Texans’ newly acquired (and oft-injured) running back David Johnson led the Texans’ NFL worst running attack in 2020.  The team averaged a paltry 92 yards per outing on the ground.   The second leading rusher for the Texans this year was none other than the quarterback, Deshaun Watson.

After the season ended, the Texan’s quarterback has become rather vocal about the team’s multitude of problems.  He has been feeding the hungry media/soap opera writers about possibly wanting to bail out of Houston, too.   And why not?  Houston Rockets basketball star James Harden complained about his team’s troubles, demanded a trade, and was shipped to the Brooklyn Nets last week.

If he could find a way to exit Houston, why can’t Deshaun Watson?

Today, a media source published the Las Vegas odds for possible trade scenarios which would take Deshaun Watson out of the professional football hell-hole called Houston and send him into another NFL hell-hole with floundering teams such as the New York Jets, Washington Football Team, or Denver Broncos.

Who is in charge of this mess in Houston?  Oh, yeah.  That’s another issue altogether.

The Houston Texans’ ownership is primarily comprised of family members of the wealthy late founder, Bob McNair.   After McNair passed away in 2018, his wife is now the team’s principal owner and his son (Cal) became the team’s CEO with responsibility for the team’s operations.

Complicating matters was the team’s hiring of Jack Easterby as Executive Vice President of Football Operations in January, 2020.   Just like former head coach Bill O’Brien, Easterby is a product of the New England Patriots organization.  Easterby (a former pastor) was considered New England’s “character coach” (whatever that means).   Easterby’s bio indicates that he did not play college football at tiny Newberry College in South Carolina.  He was on the golf and basketball teams, though.

So, the Houston Texans’ upper management include a wealthy widow, her eager son, and a guy who never played college or NFL football as the top people in charge of your professional football team.  What could be worse?

The Texans recently hired (wait for it) another New England “expatriate” named Nick Caserio as the team’s new General Manager.  At least he served in a similar post for many years in New England (which, for the record, finished with a less than sterling 7-9 record this season).

Perhaps Tom Brady’s locker room ball boy (remember, the guy who slightly deflated footballs for the team before key games?) could be the next big hire by the Texans soon.

When Texans’ quarterback Deshaun Watson learned about Caserio’s hiring several days ago, he tweeted, “I was on 2 and then I took it to 10.”  Watson was apparently hurt that he believed upper management would consult with him in advance of announcing the new hire.

I rarely (if ever) side with a pouting multi-millionaire player in their complaints against  billionaire owners.  In the case of the Houston Texans, though, the star quarterback isn’t whining about the diminished talent at wide receiver or a crumbling defense which gives up 30 points per game nearly every week.

In the past year, Deshaun Watson has seen his Houston Texans send one of the NFL’s best receivers (DeAndre Hopkins) on his way to Arizona in a horribly bad trade, a draft which didn’t get him any help, his head coach (deservedly) fired, and an executive management which remains convinced that former New England Patriots’ personnel are the answers to their problems.

Unless the Patriots’ legendary head coach Bill Belichick is named the new head coach in Houston, I’m siding with Deshaun Watson (at least for now).