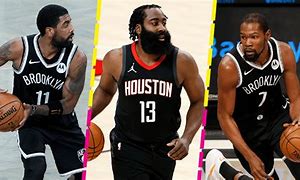 The Houston Rockets are now Harden-free.  Before the new NBA season began, James Harden asked for a trade to the Brooklyn Nets.

Though it didn’t happen before the season started, his wish was finally granted on Wednesday.  The 6’6” 31-year old James Harden, the leading scorer in the NBA over the past three seasons, was traded to the Brooklyn Nets.  Harden is an 8-time NBA All-Star who also won the league’s MVP trophy in 2018.

In return, the Rockets received a quality player to replace Harden in Houston’s starting line-up (6’4” guard Victor Oladipo – age 28) plus four first round draft picks owned by the Brooklyn Nets on every even-numbered year beginning in 2022.

The bearded Harden has been with the National Basketball Association’s Houston Rockets for the past eight seasons.  He has been a local fan favorite for most of his years in Houston.  “Fear the Beard” Rockets T-shirts featuring a caricature of Harden have been proudly worn by Houston-area basketball fans for several years.

After the Rockets acquired James Harden from Oklahoma City in 2012, the Houston Rockets became a consistent playoff team.  They have made the NBA playoffs every season since Harden came to H-town.

Unfortunately, the team has not advanced to the NBA Finals during his eight years with the franchise.  During last season, the Rockets finished fourth in the NBA’s Western Conference and lost in the second round of the playoffs to the eventual champions, Los Angeles Lakers.

James Harden wants a championship ring of his own.  He apparently decided that he would never be able to do that by staying in Houston.

So, he wanted to head east and have a chance to play on a so-called “Super Team” with his former Oklahoma City forward and teammate, Kevin Durant, in Brooklyn.  Since guard Kyrie Irving was already on the team, the Brooklyn Nets will now have three recent NBA All-Stars making up 60% of the starting five.

The big question on everyone’s mind is, “How will they perform together?”

The Brooklyn Nets also have a rookie head coach in 46-year old Steve Nash (a former two-time NBA Most Valuable Player while toiling in Phoenix).  Nash never won an NBA title during his career so he can certainly empathize with James Harden.

A bigger question may be, “Can Steve Nash deal with three oversized egos and win big in Brooklyn”?

I have pondered this thought over the past 24 hours and have come up with six plausible scenarios for the Brooklyn Nets’ trio of highly paid, high profile basketball stars: