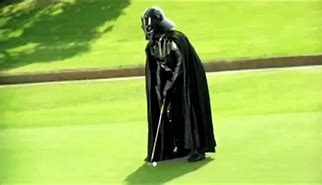 Bryson DeChambeau has officially entered the minds of professional golf.

Though I still think of this pleasant young man as a very bright Physics major from SMU, most of professional golf has become obsessed with him, too.  In less than one year, the 27-year old DeChambeau has added 40 pounds of muscle and bulk while gaining 30+ yards of distance on nearly every golf swing.

Since the 2020 version of The Masters (pandemic-delayed by six months from April) is now being played this weekend in Augusta, Georgia, much of the pre-tournament chatter has been about the physical transformation of DeChambeau from a quirky but likeable geek into an evil dark character more akin to Darth Vader!

Upon arriving on the PGA Tour just four years ago, DeChambeau quickly picked-up the nickname of “The Mad Scientist!” due to his unique set of single-length irons (all are the length as a 6-iron) and his overly analytical (and often slow) pace of play.  His initial success on the PGA Tour was quite good as he grabbed five wins in his first three years on the big stage.

Already a better than average driver of the golf ball, Bryson DeChambeau (ever the scientist) wondered if he could transform his body to be able to hit the golf ball as far the guys who were winning the long-driving contests.  If he could hit the golf ball as far as they did and have a PGA-level short game to go along with it, he calculated that playing a game of drive, pitch, and putt would allow him to obliterate many PGA Tour golf courses.

About this time last year, it was time for him to enter his laboratory (bwa-ha-ha!).

The 6’1” Bryson DeChambeau (then weighing a relatively normal 195 pounds) entered a different kind of laboratory called “The Gym”.  He spent two months over the 2019 holiday season with a purposeful decision to add both strength and weight and see if he could translate it into added length on the golf course.

After adding nearly 40 pounds of bulk by late this spring, DeChambeau has gained over 30 yards off the tee and began hitting all of his golf clubs further than ever before.  PGA Tour players and the media gave him yet another nickname.

Bryson DeChambeau was now known as “The Incredible Bulk.”

Not only did his added size make for some odd second-take looks from his fellow golfers, his extra length off the tee (now over 325 yards and rising) eventually translated into success on the golf course this summer, too.

DeChambeau won the Rocket Mortgage (Detroit) tournament in July.  He then finished in the top ten in the PGA Championship in August.

In September, Bryson DeChambeau secured his first professional golf major championship by destroying the field in winning the US Open at the difficult Winged Foot Golf Club.  He was the only player who finished under-par in the event (-6) in winning by six shots.

After the win, DeChambeau has been bombarded with questions about his motivations for “breaking” golf by playing the golf course in ways that the designers had never imagined.  He intends to play the famed Augusta National Golf Club in the same manner in which he tamed the equally tough Winged Foot a few months ago.

Bryson DeChambeau has been practicing driving his golf ball up and over the tops of Augusta’s lovely pine trees to leave relatively short iron shots into the lightning-fast greens.  Stories abound about practice rounds where he was able to drive the golf ball onto the greens on a few par-4 holes while reducing some par-5 holes to a drive and a short iron into the green.

Past and present-day Masters winners must be having mixed feelings about knowing that “Darth” DeChambeau is now intent on destroying golf’s most famous tract and trying on a Master’s Green Jacket soon.

In a recent interview, DeChambeau did not seem to be very concerned about his effect on the time-honored game of golf.

Bryson DeChambeau believes that, within a decade, the long-drive champions will learn to hit wedges and putt well enough to play on Tour.  He may be right.

Since DeChambeau is still relatively young and supple, many golfers on the PGA Tour may quietly believe that it is only a matter of time before golf’s “Mad Scientist” has to deal with an injury which affects many professional golfers.  By swinging so hard at the golf ball, Bryson DeChambeau, at some point, will probably hurt his back and effectively end his obsessive quest for the Holy Grail of dominance over professional golf courses.

Until (a) golf’s ruling bodies finally agree to make a change in the golf ball to restrict and reduce maximum distances or (b) his body breaks down from the sheer torque of his golf swings, it appears that “Darth” DeChambeau intends to test the limits of both physics and psychology again this weekend at the Masters.

The Death Star has now arrived in Augusta, Georgia!