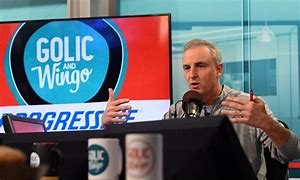 After ESPN Radio ended its “Golic and Wingo” national morning show last month and replaced it with three rookies (and, wow, do they sound like it), long-time ESPN television and radio host Trey Wingo has been tossed overboard by the network.

Trey Wingo, age 56, has been with ESPN for over 22 years.   Hal Chapman Wingo III (hence, “Trey”) worked his way up to the big show by honing his television skills at several local television stations.  After his final stop in St. Louis, Wingo received a battlefield promotion to come to Bristol, Connecticut and the wonderful world of ESPN in November, 1997.

The Greenwich, Connecticut native went to college in Waco, Texas at Baylor.  Trey Wingo graduated with a degree in Communications and set forth on a path which led him to one of the most sought-after jobs in sports journalism at ESPN.

According to his former bio with ESPN, the versatile Wingo initially covered Arena Football (you gotta start somewhere, right?), tennis, women’s basketball, golf, and the NFL.  He eventually worked his way into a coveted position as studio host for the network’s popular SportsCenter daily sports highlight show.

Trey Wingo had reached the sports pinnacle.  He was tabbed to host ESPN’s “NFL Live” daily football show beginning 2003.  He did that show all the way through 2018.

When ESPN’s Mike Greenberg bolted from nearly twenty years of doing the successful “Mike & Mike” radio show with former pro football player Mike Golic, ESPN handed the co-hosting chores to Mr. Versatility, Trey Wingo, in 2017.  The “Golic & Wingo” radio show (heard on hundreds of radio affiliates around the United States) was a solid morning show, but it lacked some of the unpredictability of Greenberg’s willingness to challenge Mike Golic.  Though Trey Wingo’s “studio host” personality was more geared toward tossing set-ups to Mike Golic to opine about, the radio show was reliably informative and entertaining.

Wingo even hosted the 2020 NFL Draft for ESPN literally all by himself this spring.  In an impressive feat, the talented Trey Wingo was the lone host in the ESPN studios for the annual spring football event.  With COVID-19 causing other co-hosts, reporters, and contributors to work remotely during the three-day football telecast, Wingo held his poise while having to know about each player being drafted and receiving constant instructions from producers and directors in his earpiece to introduce contributors and roll graphics on the player being drafted.  It was an impressive feat over those three days this spring.

So, where did all of this loyalty to the network get Trey Wingo?  According to several sources, he has been let go by the network this week.

Earlier this summer, ESPN announced that the three-year “Golic and Wingo” radio show was being replaced by the opinionated former NFL wide receiver Keyshawn Johnson, former Duke basketball star Jason Williams, and ESPN studio host Zuben Mehenti.   Based on the shows which I have listened to, they should have titled the new show “Woke Up!” as ESPN Radio’s new morning show has moved even further to the left than Golic and Wingo has been listing.  It’s too early to determine if the ratings will improve (I have my doubts), but let’s wait for the initial results.

Meanwhile, Trey Wingo remained under contract to ESPN through the remainder of 2020.  With NFL football season upon us, you might have thought that the network’s most familiar face would likely be involved.

Wingo was recently replaced by the former Miss Florida 2012, Laura Rutledge, on his “NFL Live” show.   Though she is a well prepared broadcaster and much prettier than Wingo, this smacks of being both an economy move and a generational shift.

Trey Wingo and Mike Golic are both in their late 50’s.  In addition to probably being relatively expensive to keep, the network apparently has decided that it doesn’t care if it appeals to older males any more.

ESPN has been hemorrhaging ratings for the past several years after the network (both television and radio) has consistently moved further and further to the political left by embracing one side of national social issues.  By alienating half of the nation politically, revenues for ESPN have also dropped significantly.

Thus, this newly progressive sports network has now shifted both its radio and television line-up to younger (and lower-paid) talent.  The former giant of network sports television, ESPN has continued to self-destruct by making more and more questionable business decisions.

For example, ESPN Radio is comprised primarily of AM radio signals in small, medium and large radio markets around the United States.   If you want to have some fun, ask someone under the age of 35 how many times they have ever listened to AM radio.

You are likely to receive a funny look.

AM radio’s dominance ended during the late 1970’s as music stations gravitated to the FM band and grabbed the majority of listeners for the first time.  With the advent of national talk radio on the AM dial (Rush Limbaugh, for example) in the late 1980’s, AM radio has managed to preserve a diminishing share of the overall radio market.

By the 1990’s, sports talk radio started to evolve and grabbed a place on the AM dial.   At that time, most AM radio listeners were Baby Boomers ranging from 35-55 years of age.

Twenty years later, those same Baby Boomer listeners are now 55-75 years old.  That age demographic has been traditionally shunned by both radio and television stations as the perception is that older adults generally do not buy as many goods and services as younger people do.

While that is generally true, the sheer number of Baby Boomers (with more disposable income and a willingness to spend it) has also changed the game.  Ignore that demographic (like ESPN has done) at your own risk.

Hundreds of AM affiliates of ESPN Radio across the country are about to find out soon.  In this COVID year of 2020, it seems to be yet another highly questionable business decision.  For every older AM radio listener that ESPN Radio loses with their new “woke” weekday line-up, there will not be a corresponding younger replacement listener willing to make the jump to AM radio to catch the shows.  The ratings are bound to drop in those markets.

Lower ratings for ESPN Radio will mean less local revenue for many of their local affiliates.

Less advertising revenue will mean that those stations are more likely to drop ESPN Radio as their primary source of programming.

Fewer ESPN Radio affiliates will mean that ESPN Radio won’t be able to charge as much money to national advertisers as there will be fewer local stations (and fewer population centers) carrying their national programming.

In 2020, ESPN Radio’s revamped daily line-up shows that the company has little regard for their AM radio affiliates and, especially, their older listener demographics.

It would appear that, “If you have gray in your hair, ESPN doesn’t want you there“.

Good-bye and best of luck, Trey Wingo!  You came to ESPN at the company’s zenith, enjoyed much success, and now the floundering sports media entity has just rewarded 22 years of loyalty by handing your walking papers to you.

In this goofy year of 2020, what else would we expect?