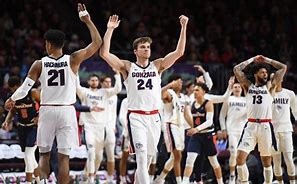 After 21 straight years participating in the annual March Madness college basketball tournament, the long wait is finally over for Gonzaga.

The Bulldogs, the West #1 seed in our (fake) 2020 SwampSwami.com Make Believe March Madness basketball tournament, finished off a stellar season with a convincing 76-68 win over the surprising Dayton Flyers on Monday night in Atlanta.

Coach Mark Few’s team has been knocking on the door for years.  Gonzaga , which has won the West Coast Conference regular season title 19 of the past 20 seasons, has bloomed from a perennial underdog in the March tournament into a national powerhouse over the past several years.  Their lone basketball resume blemish was the lack of a national championship in Spokane, Washington.

This time, though, it was the Zags cutting down the nets after Monday night’s finale!

Gonzaga, which subdued South champion Stephen F. Austin on Saturday, continued to rely on its dominating frontcourt to provide enough offense to wear down the East #1 seed from the Atlantic 10 Conference, Dayton.  The Flyers trailed 39-36 at the half and kept the score close throughout much of the game.  However, several missed free throw attempts during the last ten minutes thwarted a final comeback attempt by Dayton.

The Zags were led in scoring by their sophomore third-team AP All-American, Filip Petrusev.  The 6’11” forward from Belgrade, Serbia scored a game high 25 points on Monday night while adding nine rebounds and two blocked shots.  He was named as the SwampSwami.com Make Believe March Madness Tournament MVP.

Dayton, which ended its season with a record of 35-3, put four players in double figures led by senior guard Trey Landers with 14 points.  First-team All-American forward Obi Toppin added 13 points and 10 rebounds for the Flyers.  Toppin recently announced that he plans to head to the NBA rather than return for his final year of college eligibility at Dayton next season.

Dayton coach Anthony Grant, (who was fired after six seasons at the University of Alabama) just concluded his third year at the school and recently won national Coach-of-the-Year honors.  With his best player departing, Grant’s name is already being circulated for a number of high profile coaching positions.

With this year’s triumph, the team’s actions on the court have spoken louder than their humble coach’s words.

Congratulations to Gonzaga!  They are the winners of this year’s first (and, hopefully, last) SwampSwami.com 2020 Make Believe March Madness basketball tournament.