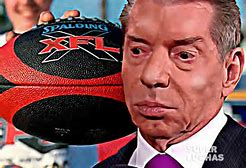 *Due to hosting issues, this story (initially published 4/14/20) is being re-posted. My apologies!

It’s been a bone-crushing week for promoter and corporate entrepreneur, Vince McMahon.

On Thursday, McMahon’s wrestling corporation, the WWE, announced it has been forced to cut expenses as it released a significant number of the company’s wrestling performers.

Vince McMahon, Sr. started his own wrestling business in 1953.  His son, Vince McMahon, Jr., has taken the company to new heights.

The WWE went public many years ago (NYSE symbol: WWE) to generate more cash and allowed the family business to become a worldwide entertainment phenomenon.

In the case for both of his business ventures, the recent C-Virus pandemic has hit McMahon over the head with a virtual folding chair as the lack of paying customers put the nail in the coffin of the fledgling XFL spring football venture.  Meanwhile, McMahon’s WWE organization just laid-off wrestling talent and has cut other operating costs as revenues dwindle.

Let’s examine each of these issues separately.

For the XFL, the spring football league, which had just played five games in 2020, filed paperwork for Chapter 11 Reorganization bankruptcy earlier this week on April 13.

The filing (which I have reviewed in detail – or the lack there-of) apparently isn’t required to reveal its assets, but it does list its top 25 creditors.

Below is a list of those with a little more “color” than provided by the bankruptcy filing:

Remember, these are unsecured creditors and most will likely receive a percentage of amounts owed depending on the outcome of the restructuring/bankruptcy proceedings.

In the case of the latest reincarnation of the XFL, the inability of the league to continue playing football games due to the recent C-virus pandemic might have been a blessing in disguise for McMahon’s wallet.

Though the television contracts and production for the new league were far superior than those for 2019’s ill-fated spring football venture named the Association of Association Football (AAF), the number of fans in the stands was strikingly similar.

At an average ticket price of $25-30 and average attendance of less than 20,000 fans per home game, the XFL’s revenue stream was simply incapable of covering the expenses of operating a professional football league.  Cash from operations is required to pay for coaches, players, referees, staff, stadium leases, and assorted other costs.

Even though McMahon’s XFL capped player salaries (except for quarterbacks) at $55,000 per year, the league’s expenses (like the departed AAF in 2019) simply are far more than the revenues being generated from television and the fans (tickets and merchandise).

Yes, the XFL’s television presentations were more interesting to watch than the AAF and certainly had a solid production value.  However, just like the 2019 AAF, the television ratings and the number of fans in the stands were dropping by the week, too.

According to several reports, Vince McMahon personally sold hundreds of millions (up to $300 million) of his own WWE stock to adequately fund the XFL’s start-up and fund the league for at least a couple of years to give it time to catch-on.

For Vince McMahon, he can (and will) point that the C-virus caused the ruination of his new XFL venture.  While it is true that the pandemic caused the gates to close and players to stay off the field, McMahon received a blessing in disguise as he was bleeding red ink already.

You don’t file for bankruptcy if your business is doing well.

After just five weeks of operation with the XFL, McMahon saw the hand-writing on the wall and made a business decision to file for Chapter 11 bankruptcy.  The Chapter 11 filing technically allows the XFL to work with creditors to restructure amounts owed (primarily by, you guessed it, Vince McMahon).

Some reports have stated that the XFL is possibly seeking purchasers for the league.  If the NFL isn’t one of those new purchasers, then the future of the XFL going forward is fairly grim.

If a debt restructuring doesn’t occur, the XFL may head into Chapter 7 (liquidation) bankruptcy.  If that should happen, then the unsecured creditors will be lucky to grab a few XFL helmets and jerseys in exchange for money owed for their services as these unsecured creditors are last on the list to be paid in Chapter 7.

Since the XFL is a limited liability corporation (LLC), nothing requires Vince McMahon to actually spend that big roll of WWE cash to keep the football league going.  As a good businessman, he was wise to set-up the league as an LLC to limit his personal exposure.

On the other hand, all of the XFL’s unsecured creditors know who isn’t paying them, too.

McMahon could, theoretically, pay these debts himself and keep everyone whole as his wallet shrinks accordingly.  It would be expensive, but a sincere gesture of goodwill, too.

However, he didn’t do that.  It’s quite legal to do that in America, and most entrepreneurs would do the same thing.

However, karma has a way of coming back to get you.

With the current lockdown, wrestling matches for the WWE are confined to their television studio/arena in Florida.  The company has tried to provide entertainment without fans in the stands for its nationally televised weekly events.

It’s just not the same to watch a match without a crowd to cheer the heroes and jeer the wrestling villains, though.

As such, the WWE has stockpiled a large number of highly-paid wrestling talent for its roster to maintain the company’s lofty perch at the top while the company built a worldwide presence.

The WWE has lost the ability to take its traveling show to arenas across the USA and the world amid the pandemic crisis.  The loss of gate revenue and related merchandise sales at those events has cost the company significant revenues.

Like so many other companies during this shut-down, Vince McMahon’s WWE cannot afford to keep paying all of its performers with no guarantee of when business will return to normal.

On Thursday, the WWE announced that it had cut pay for its executive management group and laid-off a number of its wrestling family.

The biggest name of the performing list was former Olympic wrestling champion, Kurt Angle.  Others included regular performers on television and in arenas, but, for the most part, the list would be regarded by most wrestling fans as mid-card wrestling talent.

In summary, Vince McMahon has just kicked-out of a proverbial two-count this week with the XFL’s bankruptcy filing and the draconian cuts required for his WWE operations.  However, this ultimate “Heel” (C-Virus) hasn’t pinned the elusive McMahon just yet.

Vince McMahon is one tough hombre and has come back from the brink of defeat nearly as many times as his famous WWE “Undertaker” character has.

Since Vince has been known to write his own scripts, I wouldn’t bet against him.