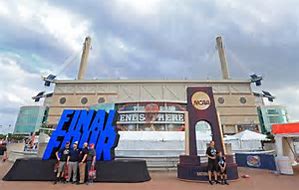 The Cinderella season for Dayton will continue, but the clock finally stuck midnight for the Stephen F. Austin Lumberjacks on Saturday night in Atlanta during the SwampSwami.com 2020 Make Believe March Madness Final Faux national semifinal games.

In the first game of Saturday’s MBMM doubleheader, the 34-2 Dayton Flyers’ dream season will continue after the East #1 seed took a hard-fought 82-77 victory over Villanova to advance to the national championship game on Monday night.

Dayton’s Naismith national coach-of-the year, Anthony Grant, took a page out of Villanova’s game plan with a methodical offense and stifling defense in taking down the Wildcats.  The surprising Flyers from the Atlantic 10 Conference, winners of 25 games in a row, forced Villanova into ten first-half turnovers in grabbing a 39-32 first half advantage.  Dayton has not lost a basketball game since an overtime loss to Colorado on December 21, 2019.

In the second half, the pro-Dayton crowd in Atlanta lifted the Flyers offense as All-American forward Obi Toppin caught fire and threw down an impressive dunk during a pivotal 12-1 run.  Toppin finished with a game-high 26 points and added 11 rebounds with three blocked shots.  Guard Jaylen Crutcher nailed four straight free throws in the final minute to seal the victory for Dayton.

Villanova, winners of 11 of its past 12 games and champions of the Midwest Region as the #3 seed, kept the contest close, but Coach Jay Wright’s Big East team never led during this opening national semifinal game.  The Wildcats shot 40% from the field but missed a number of three-point attempts as they attempted to rally down the stretch.  Guards Justin Moore and Collin Gillespie led the Wildcats with 15 points apiece.  Villanova’s season ends with a record of 28-8.

#12 South seed Stephen F. Austin excited the crowd in the first half of their game with West Region champion Gonzaga, but the Zags’ dominating front line delivered the decisive blow as Gonzaga (36-2) grabbed a thrilling 86-82 win over SFA in the SwampSwami.com Make Believe March Madness national semifinal nightcap game in Atlanta on Saturday.

The darlings of this year’s MBMM event and winners of 19 straight games heading into the contest, Stephen F. Austin raced to an early 8-0 lead and forced Gonzaga Coach Mark Few to burn an early time-out.  The pro-Lumberjack crowd roared its approval as SFA’s defensive energy led to eight fast-break baskets during the first half as the team headed to the locker room leading 45-40.  Starting guards Kevon Harris and Roti Ware pressured Gonzaga into ten first-half turnovers which led to several easy buckets for the Lumberjacks.

After halftime, Gonzaga protected the basketball much better and then methodically worked the ball into the lane to their much bigger front line.  Gonzaga sophomore Filip Petrusev dominated the game down the stretch as the 6’ 11” forward scored 22 of his game-high 28 points in the second half as the Zags finally snagged the lead for the first time at 75-74 with just over four minutes remaining in the game.

The Southland Conference champions, Stephen F. Austin missed a few key free throws in the final two minutes as the upstart Lumberjacks concluded the most successful season in school history at 32-4.  The Atlanta crowd gave SFA’s starting five a lengthy standing ovation as the starters came off the court in the final seconds when Lumberjacks head coach Kyle Keller called a time-out to empty his bench and salute his starters once the game’s outcome had become certain.

Which (fake) team will reign supreme?  Come back on Tuesday, and we’ll find out!