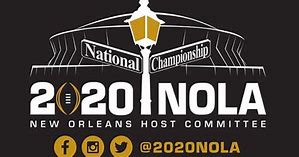 Well, what do you know?  After weeks and weeks of deliberations and spending last weekend sequestered in Dallas watching college football, the BCS college football playoff committee has agreed with yours truly on who those final four teams should be!

One week later, the BCS committee (after thousands of dollars of unnecessary travel, hotel rooms, etc.) has come to the same conclusion!

OK, the order of the teams was different (LSU, Ohio State, Clemson, and Oklahoma), but I nailed the Final Four without any help at all.

The reason for the difference in the ranking order is that the SwampSwami.com College Football Top 25 starts the new season by using the AP Top 25 final rankings from the prior season.  In those rankings, Clemson was #1, Ohio State was #3, and LSU was #6.  This season, 22 of the other teams eventually lost one or more games, but three teams won every game on their schedule to post a perfect 13-0 record in 2019.

That’s why I have Clemson as #1, Ohio State as #2, and LSU as #3.  Sure, I do believe that LSU is (at this time) the strongest of those three teams.  However, my rankings are based on logic and are not biased for my personal favorite teams (which is a major flaw in most polls).

The SwampSwami College Football Top 25 then ranks each team with one-loss, then two losses, etc.  Within each group, the teams are measured by the BEST team which they have defeated in 2019 (by that team’s current record).  If there are still “ties”, I utilize the margin of victory over the “best” opponent.

I’ve done this for three seasons now.  I will agree that my ranking procedure appears to give a little boost to the so-called weaker conference champions near the top of the rankings.

But who is to say that 12-1 Memphis (my #5 team) would not be able to beat the BCS’ #5 team (Georgia)?   Georgia struggled mightily against LSU over the weekend while Memphis defeated Cincinnati (9-3) for the second straight weekend.

My point is that the conference champions playing in the so-called weaker conferences such as Memphis (American Conference), Boise State (Mountain West), and Appalachian State (Sunbelt) are, by record, quite likely just as good this season as the many of the top tier teams of the larger conferences.

Who is to say which set of teams are better unless they play against each other.  The problem is that teams from the so-called Power 5 conferences (SEC, Big Ten, ACC, Big 12, and Pac 12) generally will not schedule these opponents and will seek to avoid such match-ups in bowl games, too.

Why?  The bigger conference teams have too much to lose in recruiting and prestige if they drop a game to a smaller conference power.

This post-season will give Memphis a shot against Big 10’s Penn State in the Cotton Bowl.  Boise State will face 7-5 Washington from the Pac 12 in this year’s Las Vegas Bowl.

Appalachian State, though, gets banished to play in the New Orleans Bowl against Conference USA runner-up, UAB.  No offense to the Blazers, but the 12-1 Mountaineers have already beaten two teams from the Power 5 (North Carolina from the ACC and South Carolina of the SEC) in 2019.   After beating two bigger conference schools, I guess no one wanted to test the Mountaineers a third time.

I will publish my list of bowl predictions later this week.  For now, let’s take a look at the entire field of 130 FBS teams in this season’s final SwampSwami.com College Football Top 25 for the week ending December 7, 2019: