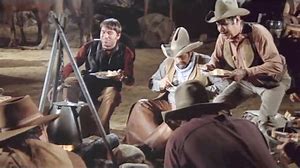 For many guys, one of the most memorable movie scenes comes from the 1974 classic movie, Blazing Saddles.  The Mel Brooks movie, which was quite politically incorrect even 45 years ago, had a scene where a group of cowboys were sitting around the campfire and eating beans.

If you don’t already know what happens next, use your imagination!

For Dallas Cowboys fans, the campfire scene pretty much sums up how they feel about their favorite football team right now.  The team (now 6-7 in the lousy NFC East division) dropped an ugly 31-24 game on Thursday night on national television against the offensively-challenged Chicago Bears.

The Dallas Cowboys’ defense stunk.  Other than one or two series, the Dallas offense stunk.  The play-calling and coaching was, well, a Blazing Saddles’ campfire smelly.

For the millions of lifelong Dallas Cowboys fans, there is one smell that just never seems to go away.  Season after season, the NFL team has brought in new players, new coaches, and lofty promises of returning to the Super Bowl.

For nearly a quarter century, Dallas Cowboys fans have watched their favorite football team fade into the sunset long before the Super Bowl is played.

For example, the 2019 edition of the Dallas Cowboys was expected by some (but not me) to be a contender for the NFC championship and have a shot at this year’s Super Bowl. With a 6-7 record with three games to go, the Dallas Cowboys are imploding yet again.

Over the last three seasons, Dallas rolled-off records of 13-3 (lost in first round of playoffs), 9-7 (no playoff appearance), and 2018’s 10-6 team (which lost in the second round of the post-season).

In fact, since 1995, the Dallas Cowboys have not participated in either the NFC Championship game or the Super Bowl.  That’s 24 consecutive years!

There has been one consistent factor during those years.  Now 77-year old owner Jerry Jones and his family management team remain in firmly charge of the Dallas Cowboys.

Prior to Jerry Jones purchasing the Dallas Cowboys for a now-bargain price of $140 million back in early 1989, the team had been a fixture in the NFL playoffs for most of a twenty year span under their one and only head coach, Tom Landry.

Jones immediately fired Tom Landry and handed the head coaching job to a successful college football coach (and Jones’ University of Arkansas teammate) Jimmy Johnson.  Under Johnson’s leadership, the Cowboys began to draft better football talent and the on-field results quickly turned around for the better.

Jimmy Johnson’s Dallas Cowboys teams won a couple of Super Bowls during the early 1990’s.  However, Johnson (like others following him) grew weary of having Jerry Jones and his family meddling in the football operations.

It isn’t an exaggeration.  Jerry Jones and family have a choke hold on this football team.

Jerry Jones is not only the team’s owner, but he is also the President and General Manager.

Jerry Jones’ son, Stephen, is the team’s chief operating officer and in charge of player personnel.

After 29 years of Tom Landry as the head football coach in Dallas, the Jerry Jones’ Cowboys have plowed through a number of coaches.

With nine seasons as the head coach of Dallas, Jason Garrett’s tenure trails only Bill Belichick of New England (19 years), Sean Payton of the Saints (13 years), Mike Tomlin of the Steelers (12 seasons), and John Harbaugh of the Baltimore Ravens (11 years).

Dallas Cowboys fans know that Garrett is a loyal soldier.  His coaching record (81-62) shows a winning percentage of 57% has featured just three playoff appearances in nine seasons.  None of those playoff seasons included more than one post-season win, though.

In Garrett’s defense, he coaches players who are selected with great input from members of the Jerry Jones family.

All brought to Dallas Cowboys fans by an ever-meddling middle-of-the-road ownership team!

As a business man, Jerry Jones’ $140 million investment in the Dallas Cowboys in 1989 has grown to an astounding (and perhaps overblown) estimated worth of over $6 Billion in 2019.   Despite some years of bumbling and stumbling on the field, Jerry Jones and family are still making a lot of money with their team.

For Dallas Cowboys fans longing for a change at the top soon, even Santa Claus would still need to coerce Jerry Jones and family to be willing to sell the team (at an inflated price, of course). It won’t be easy to get the Jones family to give up their beloved toy.

In the 32-team NFL, fans of other franchises can identify with the current frustration and pain being felt by long-time Dallas Cowboys fans.

Football fans in Detroit, Cleveland, Jacksonville, and Houston can relate.  None of those teams has even played in a single Super Bowl.

By comparison, Dallas has won five Super Bowls and lost in three other appearances.

Yes, Dallas Cowboys fans are a bit spoiled by the past success of their team and yearn to return to greatness again.  You can’t blame them for that.

Any Dallas Cowboys fan born in the past 24 years has yet to see their beloved team even play in a Super Bowl yet.  The team’s glory days seem like an eternity ago to all of their fans in 2019.

Yes, Jerry Jones and family have kept the Dallas Cowboys’ fairly competitive, but the team remains (for the most part) a middle-of-the-road and slightly better-than-average football team in most seasons.

They can and just might fire head coach Jason Garrett soon and go try to buy another coach.  Jerry Jones certainly has enough money to buy the best coach that money can buy.

The real issue is that Cowboys’ owner Jerry Jones doesn’t seem to understand (or care) that the best available coach will want the entire Jones family kept away from player personnel decisions, pay for key players, and the like.

As Dana Carvey would say on Saturday Night Live, “Not gonna happen!”

As players and coaches come and go after visiting Jerry Jones and family’s Dallas Cowboys campfire, Dallas Cowboys fans are quite familiar with those same sounds and smells by now.