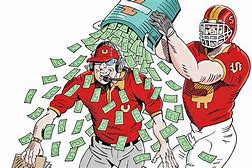 For major college football coaches, the pressure of the job never seems to end, but concerns about financial security seem to be a thing of the past.

Though there aren’t many coaches pulling in upwards of $10 million per season like Clemson’s head coach Dabo Swinney or the $8.8 million dollars paid to Nick Saban at Alabama, would you believe that nearly 90 major college football coaches are now earning $1 million per year or more?

According to one survey of the 130 BCS large division football schools, even the lowest paid head football coach was still bringing home about $350,000 per year.

Other than Swinney and Saban, the other top coaches (by paycheck) were Jim Harbaugh at Michigan and Jimbo Fisher at Texas A&M (both about $7.5 million/year).  Three SEC coaches (Gus Malzahn at Auburn, Kirby Smart at Georgia, and Dan Mullen at Florida) were all pulling down $6 million/season or more.

Former Florida State head football coach, Willie Taggart, was also in that $5 million grouping.  However, Taggert was fired earlier this season less than two years into his five year contract.  FSU is reportedly on the hook for nearly $18 million to pay the remainder of Willie Taggert’s contract.

Nice work if you can get it!

Another recently-fired head coach was Chad Morris at Arkansas.  Like Taggert, he was fired before the end of his second season at the helm in Fayetteville.  His pay?  $3.5 million per year. Word from the Hogs is that Morris is still owed about $10 million from Arkansas.

Based on relative pay based on the highest attendance teams, this season’s biggest coaching bargain is LSU’s Ed Orgeron.  With the current #1 ranked team, Coach O’s $3.5 million (soon to be $4 mm) would rank him in the mid-30’s range of highest paid coaches.

Speaking of LSU coaches, former head coach Les Miles is now at Kansas and pulling down just short of $3 million for a Jayhawks team which is currently 3-7.

Other “bargain” coaches in 2019 who may get attractive offers from other schools include:

According to another report, there were more than twenty assistant football coaches making $1 million or more per year.

Leading the way is LSU defensive coordinator Dave Aranda at $2.5 million.  Most of the other millionaire assistant coaches are employed by teams which, historically, have the largest stadiums, highest attendance, and, as a result, the largest operating budgets in college football.

These highly paid coaches normally have a resume which shows a large number of stops along the way to their current lofty perch.

Ed Orgeron, for example, has rented U-Hauls at least a dozen times over his 25 seasons as a football coach upon graduating from Northwestern State University in Natchitoches, Louisiana.

Even Nick Saban has moved his family a dozen times before settling in at Alabama for the past 12 years.

Many assistant football coaches play a version of “Musical Chairs” at the end of most seasons.   Sometimes, they will receive a better offer from another coaching friend.  Other times, they are looking for a new job after the dismissal of the head coach that they had been working for.

It usually leads to a lifestyle which might sound quite familiar to many military families.  Moving your family every few years can be difficult, but, on the positive side, it also increases the chances of making new friends and forging bonds with others in a similar situation.

In a traditional business environment, the accepted norm is that about 50% of the revenue of the company goes to pay for the staff.  In the case of major college football, the revenues generated from ticket sales and television amount to big money for the university.

The school’s athletics department then utilizes the surplus from the football program to pay for the deficits for most of the other men’s and women’s sports programs at the university.

As a stand-alone business, most major college football programs are similar to LSU’s and generate a significant positive cash flow for the athletics department.

Today’s hefty salaries being paid to the majority of major college football coaches (compared to other teaching staff) appear to be justified based on the gross margins being made by these programs.

Standing on their own, most major college football programs are a very lucrative business in 2019.   The surplus cash generated by these programs is likely why the NCAA and the universities will keep a vice grip on the money for as long as possible.

On the other hand, the college football players (who receive scholarships, room and board for their efforts) will likely continue their push for a share of this large pie, too.

A train wreck may be coming soon as all of these interested parties stake their claim for the college football cash machine.

This big pile of college football surplus cash will be the subject of many future discussions in the years to come.