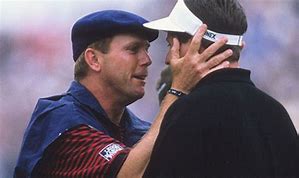 I remember it like it just happened yesterday.  Twenty years ago on October 25, 1999, professional golfer Payne Stewart boarded a private jet near his family’s home in Orlando, Florida.

After the jet climbed to its assigned cruising altitude, the cabin quickly lost air pressure.  As a result, both pilots and the four passengers (including Payne Stewart) aboard died of asphyxia.  The plane, though, continued to fly under its own guidance system until it ran out of fuel and crashed in a field in rural South Dakota.

I was at home that morning when the news reports first came out on Golf Channel about the plane’s disappearance.  At first, the reporting was uncertain as to why the plane had failed to respond to air traffic controllers.  Within minutes, though, the concern had changed as to when and where the jet would run out of fuel and crash land.

Fortunately, no others were injured when the plane crashed itself in South Dakota.

Payne Stewart was 42 years of age at the time of his tragic death.  Stewart won 11 times on the PGA tour.  He was also a three-time major championship winner with his first coming at the 1989 PGA Championship.  The other two major wins came in the U.S. Opens of 1991 and 1999.

It was at the 1999 US Open in Pinehurst, North Carolina that Payne Stewart held off a charging Phil Mickelson by draining a 20-foot putt for par on the final hole.  Though the loss was another runner-up finish for Mickelson, the tournament’s lasting memory for me is the close-up on the 18th green of the two friends congratulating each other with Stewart telling Phil, “Good luck with the baby.  There is nothing like being a father!”

Stewart was born and raised in Springfield, Missouri and attended SMU in Dallas on a golf scholarship.  After graduation, he embarked on a long journey to make the PGA Tour.

While participating on the Asian PGA tour coming out of college, he met his wife, Tracey, during a stop in Malaysia.

In an interview for a golf magazine, Tracey laughed saying that Payne had been in Asia for so many weeks that finally seeing a blond probably gave her an unfair advantage.

They married a year later in 1981, and Payne Stewart earned his PGA card at the Tour’s qualifying school championships later that year.

The PGA Tour was then introduced to one of the most unusual dressers in years.  Payne Stewart was known for wearing bright colors, knickers, argyle socks, and a unique flat (Tam o’shanter) golf cap while on the course.   His late father had advised him that a little style on the golf course would make it easier for fans to remember him.

Boy, was Dad ever right about that!

After winning in 1982 at the Quad Cities Open during his first season on the big tour, Stewart earned a big following on tour with his fluid golf swing, a fan-friendly smile, and, of course, his signature knickers and golf caps.

Payne Stewart played on five U.S. Ryder Cup teams (going 3-1-1) and was a very patriotic American representative during those events.

Payne’s fun-loving style carried-over off the course with fellow tour members Peter Jacobsen and Larry Rinker as part of a band called “Jake Trout and the Flounders”.  Stewart played harmonica for the group which played after the rounds concluded at many PGA tour stops.

Stewart was also known for his generosity and charitable work off the golf course to help others.

After Stewart’s passing, the PGA Tour annually honors a golfer with the Payne Stewart Award for “Charity, Character, and Sportsmanship”.  Past winners are a “Who’s Who” of golf with Arnold Palmer, Jack Nicklaus, Gary Player, Hal Sutton, David Toms, and Ernie Els among this elite group.  Hale Irwin was recently announced as the 2019 recipient.

Payne Stewart left behind his wife (Tracey) and two children, Chelsea and Aaron.

Twenty years after the plane crashed, Payne’s two children were featured this week on a PGA Tour podcast called “Remembering Payne with Chelsea and Aaron Stewart”.

The two kids have now grown-up and said that, despite how tough it was to deal with the loss of their father at such a young age, they laughed at how much trouble their notoriously fun-loving Dad would have been getting into if Twitter had been around back in the 1990’s.

Aaron, the younger of the two, carried on the golf tradition in the family by playing for SMU like his father.  Aaron said that his Dad would have loved to have seen him play in the US Amateur golf tournament.

Chelsea went to Clemson and is now married with her own son.  She said that her Dad would be the biggest doting Grandpa in America and would probably have a plastic golf club placed in his grandson’s hands at all times.

The two children shared how even now, after twenty years, people still come up to them to tell stories about how special their Dad had made the golf fans, tournament workers, and anyone he had the chance to meet feel.

Chelsea said, “He’s an angel over our shoulder and still looking after us today!”