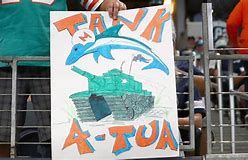 With the NFL season approaching the midway point, there are four remaining teams which haven’t won a single game yet.  With Alabama quarterback Tua Tagovailoa considered the consensus #1 pick in next year’s NFL draft, the competition to remain winless and grab Tua with the top pick will be fun to watch for the league’s bottom feeders.

Some of these winless teams are a surprise.   The New York Jets spent big money to bring in running back Le’Veon Bell from the Steelers to give their offense a lift.  With the Jets quarterback Sam Darnold out with mono the past few weeks, the J-E-T-S are now 0-4 and have the worst offense in the league.

The Cincinnati Bengals were expected to at least be competitive in the tough AFC Central, but these cats sport a 0-5 record this season.  Plenty of good seats are available for the remaining Bengals home games!

The Washington Redskins were expected to be a lousy team in 2019, but they have exceeded expectations with a 0-5 start to this season.  The home team for Ol’ DC has already fired their coach (Jay Gruden) this week and gone through several quarterbacks in search of an offensive spark.

Finally, there are the Miami Dolphins.  Heading into the season, the Dolphins had pretty much telegraphed that they were mailing-it-in this season and established themselves as the odds-on favorite to grab the #1 pick in next spring’s NFL draft by virtue of having the league’s worst record in 2019.

The Dolphins have fulfilled their destiny with their historically bad 0-4 start.  The Fins rank 31st in the NFL in team offense (the Jets are the only team worse) and 32nd (last) in defense this season.

The team traded their starting quarterback (Ryan Tannehill) to the Tennessee Titans.  The Dolphins have sent starting linemen on both offense and defense to other teams for future draft choices or to simply shed salaries.   Though the team’s management won’t come out and say that the team is trying to implode this season, their awful start to the season confirms a successful plan.

For the record, below is the bounty that Miami has hauled-in thus far after saying good-bye to several of their best (now former) players.  Keep in mind that the team making the future draft picks is also the same one which made questionable choices with their draft picks in previous years:

However, there may be a few flies in the ointment for the Miami Dolphins and their genius plan to finish in last place this season.  With three other teams in the winless mix at this point, the Dolphins will have to face two of those same teams (and lose) to keep their chances of grabbing the #1 pick.

In a very interesting twist, each of the NFL’s four winless teams will face another of the currently-winless team at least two more times for the remainder of the regular season!

In the case of the Miami Dolphins, they will face currently-winless teams four more times (Washington, the Jets – both home and away, and Cincinnati) with three of the games coming at home for Miami.

Miami must now be feeling big-time pressure!  With three games to be played against these other losing teams in Miami (where the few loyal Fins fans can spread out in their half-empty home stadium) might cause Dolphins’ players and coaches to develop temporary amnesia and actually play to win!  Oh, no!  This won’t do.

In evaluating these teams who are in the running for finishing with the worst record in the NFL this season, the odds on favorite right now might be the Washington Redskins.

Washington will have to play two of the remaining winless teams (at Miami this weekend and at home against the Jets in November).  The remaining teams on their schedule have won 28 games thus far in 2019.   That means that it will be tougher for the Redskins to win a game or two.

By contrast, the New York Jets’ remaining opponents have only won 22 games this season while Miami’s have won 23 and Cincinnati 24.

Based on the hardest remaining schedule, the Washington Redskins may have the best statistical chance to upset the Miami Dolphins’ plans in “Tanking for Tua”.

This could be a real horse race to the finish line to see who this year’s biggest loser will be.

If you are (or were) a fan of these franchises, it might be a good idea to find something else to do for the fall months as your favorite team is likely to “fall” several more times before the end of the 2019 season.