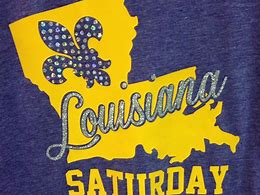 It’s a statewide election day in Louisiana on Saturday.  Based on my unscientific early polling data, more people will be attending football games in the state this weekend than will pull the lever for their favorite politicians!

Times are good for Louisiana’s football fans right now.  The New Orleans Saints are atop the NFC South Division – even with Drew Brees nursing an injury to the thumb on his throwing hand.

For college football fans around the Bayou State, the 2019 season has brought joy to fans from the northern end of the state to the south.   Let’s take a look at the state’s success stories:

Louisiana Tech – The Bulldogs are off to a 4-1 start this season and currently sport the best record in Conference USA.   This Saturday, Louisiana Tech will host one of the worst teams in college football, the 1-5 UMass Minutemen, in Ruston.  Tech’s powerful offense is led by senior quarterback J’Mar Smith.  With a favorable schedule remaining, the Bulldogs should be a likely bowl candidate.

UL Monroe – The ULM Warhawks are 2-3 on the season, but they have lost to powerhouse teams like Iowa State, Memphis, and Florida State.  With the remainder of their schedule against Sunbelt Conference foes, Coach Matt Viator’s team has a chance to finish strong and be a bowl contender this season.  ULM quarterback Caleb Evans leads a balanced run and pass offense ranked #26 in the country this year.  If only they could finally beat…

UL Lafayette – Louisiana’s Ragin’ Cajuns are off to a fast 4-1 start this season and lead the Sunbelt Conference at the midway point of the season.   If you like teams which can run the ball, the Ragin’ Cajuns are for you!  They are #1 in the country this season averaging about 315 yards per game on the ground.

Tulane – The Green Wave has rolled to an impressive 4-1 start in 2019 as well!  Tulane’s football fortunes have come full circle.  After years of being part of the national discussion, Tulane football hit rock bottom by the 1990’s.  After discussions about cancelling the football program, a revival has occurred in New Orleans.  Tulane now sports a new “right sized” 30,000 seat football stadium which was completed five seasons ago.   The Green Wave may be looking at a bowl berth this season, too.

FCS – Small division schools – Louisiana has no shortage of teams which are playing well in the smaller division this season, too.

Both the Nicholls State Colonels (3-2) and Southeastern Louisiana Lions (3-2) of the Southland Conference are off to a good start with both teams currently ranked in the FCS Top 25.

However, most current and former residents of the state of Louisiana will have their attention focused on something other than election results this Saturday night.  The eyes, ears and vocal chords of the state will be laser focused on the happenings on the gridiron in the state’s capital city of Baton Rouge.

A match-up of top ten teams will happen Saturday night as the #5 LSU Tigers will square-off against the upstart and seventh-ranked Florida Gators.

A night game in Tiger Stadium will bring forth 103,000 of your closest friends to loudly cheer and support the LSU Tigers football team.   On Saturday night, Tiger Stadium will become the fifth largest city in the state of Louisiana behind New Orleans, Baton Rouge, Shreveport, and Lafayette.

For those who have been fortunate enough to have attended a nighttime football game at LSU, Tiger fans will have spent the entire day (or past few days) preparing for this game.  Tailgating at LSU is absolutely awesome.  As long as you’re not wearing a Florida/Alabama/Auburn shirt, that is!  This weekend, you will be welcomed by most of these Saturday chefs to sample the weekly special – a Cajun delicacy called Gator Gumbo!

ESPN’s College Game Day television show will kick-off Saturday morning at the LSU Quad on campus from 8AM until 11AM local time.  This marks LSU’s 13th time to serve as the host school for the popular Saturday morning college football show.   I will be shocked if the ol’ Coach himself, Lee Corso, doesn’t don the headgear of Mike the Tiger at the end of this week’s show.

For the ensuing eight hours on campus, Tiger fans will wander about the lovely campus of stately oaks and broad magnolias to sample both food and beverages of the hundreds of impromptu outdoor parties and festivities.  While most fans will make their way by the extremely comfortable surroundings of LSU’s very own Mike-the-Tiger, others will be keeping a wary eye on television screens to see how other SEC teams are faring on Saturday.

That’s especially so for the Alabama vs. Texas A&M game being played Saturday afternoon in College Station.   At least for one day, there will be tens of thousands of Aggie fans in Baton Rouge.

That all changes in late November when Texas A&M comes to town for the final home game of the season.  The Aggies captured a surreal 7-overtime victory over LSU last November, so the Tigers will be seeking revenge.

Just about an hour before the game starts Saturday night, LSU’s Golden Band from Tiger Land will march down the hill and stop just outside of the stadium’s North end zone.  In front of 20,000 or more fans crammed and jammed around them (some even bravely climb nearby trees to get a glimpse), the band will plays those famous four notes and jogs into the stadium as if to signal, “Hey, Everybody – It’s time to come inside the stadium and let’s get to work”!

Once inside the massive stadium, the pregame excitement continues to build all the way until the home Tigers come bursting onto the field the screams of 103,000 well lubricated fans.  With the LSU band leading the cheers and keeping the boisterous crowd whipped into a frenzied state for the entire game, the LSU Tiger football team can count on their fans to give them a lift if and when needed.

This weekend promises to be special.  The weather in Louisiana (like most of the South) has been quite hot, but not this Saturday in Baton Rouge.   The first cold front of the season has finally made it to the deep South (it’s about time!) and the weather forecast is terrific.

Here’s your game time weather report. Temperatures will ease into the 60’s during the game.  Winds will be light and from the North at 5-10 miles per hour.

And, as LSU fans will tell you, the chance of rain in Tiger Stadium?  N-E-V-E-R!