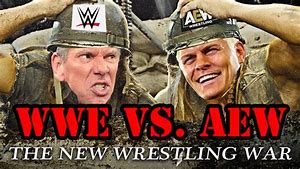 Familiar ringside announcers like ol’ JR himself, Jim Ross (a long-time fixture with WWE until he “retired” a few years ago) and former WCW mainstay Tony Schiavone launched the broadcast Wednesday night to give television viewers a look at the AEW’s new wrestling promotion.

The packed house in Washington, DC this week certainly looked to be entertained as well.

Some of the new company’s wrestlers are quite familiar, too.  Cody Rhodes was one of founding members of this new group and is the son of WWE wrestling legend, Dusty Rhodes.  A former WWE champion, Chris Jericho, appears to be the biggest carryover “name” as he (for now) holds onto the AEW title belt as of week #1 of the program.

It takes a lot of money to launch something like this.  However, the fledgling wrestling company is controlled by the billionaire owner of the NFL’s Jacksonville Jaguars, Shahid Khan.  Reports are that Khan is worth over $6 Billion.

Yep, that’ll do for awhile.

Khan’s son, Tony, is also listed as the founder and president of the AEW.

So, what does WWE’s chairman, Vince McMahon, think about the new competition?

It’s hard to tell, but history says that McMahon plays to win at all costs.  The World Wrestling Federation (WWF) was built by his father.  In the past 35 years, though, Vince has taken the company into stratospheric financial heights after taking the company public (though he and his family still control the majority of the stock).

Speaking of WWE stock, the company’s publicly traded stock reached a peak around $90 per share early in 2019.  As of this writing, the company’s stock price was trading just below $70.

According to public sources, Mr. McMahon personally owns about 28 million shares of the company’s stock.  A decline of $20 per share in 2019 would cost him about $560 million in net worth already this year.

Compounding the issues for “The Chairman” of WWE is that he had already cashed-out nearly $500 million of his company stock to fund the start-up football venture XFL.  After the original XFL’s one year crash and burn in 2001, the second coming of the spring football league is slated to begin play in early 2020.

Just like before, Vince McMahon is the owner of the XFL.

Could the new wrestling competitor AEW’s timing be any better than to catch Vince McMahon while he has one eye trained on his start-up football venture?

Don’t forget that Vince McMahon is now 74 years of age.  WWE’s corporate management team currently includes McMahon’s daughter, Stephanie, and her husband Paul Levesque , a former WWE wrestling star known as “Triple H”. While the current management team likely insures the McMahon family’s control of the company, the rise of a well-funded wrestling competitor (which already has its own weekly national television program) will pose some tests for the WWE.

WWE has reaped the benefits of nearly two decades as the only national wrestling company after body slamming its competition in the early 2000’s.

Competition has finally arrived, though, as the new AEW is off to a good start in its first year.

It will be interesting to see if AEW will be able to wrestle the championship financial belt away from the WWE and McMahon family in the years to come.

If I were the AEW, I wouldn’t pat myself on the back just yet.

Rather, I suspect that Vince McMahon (and company) will be coming after this new competitive threat with the equivalent of a folding chair very soon.

Vince McMahon’s WWE won’t go down for the count without one heck of a fight.

Oh, the humanity of it all!