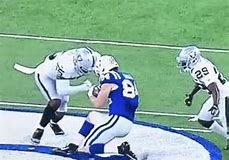 How many times are we going to see another savage, senseless head injury caused by a football player who uses his head and helmet to inflict a possibly life-threatening hit on another player?

Yes, I’ve discussed this before, and my position has not changed.

I want to see this disappear immediately.

I don’t want to hear about how players are bigger, stronger, faster, etc.  They are not instructed to tackle an opponent by utilizing their head and helmet as a battering ram.

I played football in elementary, junior high, and high school many years ago.  Young football players are still being taught to tackle with their head up (to avoid injuring yourself) and to wrap-up the legs of the other player to stop his ability to run.  That is the proper form.

To the best of my knowledge, today’s defensive football players are NOT taught to launch themselves head first into the opposing player in order to stop the play.

If they are, their coaches should be fired immediately.

No, these head shots we have been observing in recent years on the gridiron are done with intent to inflict serious bodily damage to the other player (and, occasionally, to themselves, though inadvertently).

If the game of football is going to survive, this practice should be ended immediately to reform the game we love to play and watch.

I grew up watching hard-hitting linebackers such as 1960’s legendary tough guy Dick Butkis (Chicago), 1970’s fearless Steelers pain inflicting Jack Lambert, and 1980’s “Mr. Intensity” himself, Mike Singletary (also with da’ Bears).  These men and others of their era hit every bit as hard as the players you are watching in today’s game of football.

To the best of my knowledge, though, most of the hard tackles of yesteryear were made without the defenders using their head as the primary weapon.

Although it wasn’t uncommon for serious injuries such as broken ribs or limbs to happen which caused opposing players to be carried off the field on stretchers, you didn’t see players from the bygone eras purposefully launch themselves headfirst to make a tackle utilizing the crown of their helmet as a weapon and the primary method to stop the play and inflict punishment.

It was then, and remains today, downright dumb and unnecessarily dangerous to all involved.

And it needs to stop.  Immediately.

Last weekend, there were several NFL players who received concussions as a result of dangerous hits on the field.  If you happened to watch what a New England Patriots defender did to Buffalo quarterback Josh Allen on Sunday, you give thanks that Allen isn’t laying in a Buffalo area hospital paralyzed by the senseless helmet-to-helmet hit caused by the New England defensive player.

The quarterback (Allen) was already on his way to the ground prior to the hit in question.  It was an intentional attempt to inflict an injury to the opposing player.

On Monday, the NFL finally suspended its most frequent and savage offender, Oakland Raiders linebacker Vontae Burfict, for the rest of the 2019 season for taking a breathtakingly dangerous head shot on Sunday at Colts tight end, Jack Doyle.

The league should also make him (and any offenders) pay for any doctors and hospitalization required for Doyle’s injury (now and for the rest of his life).  Watching the instant replay of that play will only make you shake your head as to why another human being would attempt to inflict such damage on another.

It was the right call to ban Burfict for the rest of this season.  After a career of inflicting such intentional blows to the head, I’d love to see him banned permanently.

It would have been just as correct to throw the New England player out of the game in Buffalo and ban him from playing for at least half of a season, too.  You can’t watch a replay of that play without cringing at what that blow might do to Josh Allen’s brain down the road.

While it is exceedingly dangerous and dumb for an attacking defensive player to lead with his helmet to stop a fellow competitor, the recipient of this savage blow may have life-altering damage inflicted.

Concussions and neck injuries can cause life-long implications for the recipient of these unnecessary and preventable hits.

The medical community is still in the infant stages of learning the relationship between head injuries and CTE issues.  Brain damage and shortened life is a big concern for players who receive concussions from intentional hits.

Football is dangerous enough without these helmet-to-helmet head shots.

In professional wrestling, the competitors (entertainers) know that it’s bad for business for a dangerous stunt to be taken too far.  Unless the hit can be proven to be accidental, then the offender will likely be fired for taking down a box-office draw.

The same thing should go for football at all levels as well.  Ask Buffalo fans if having their starting quarterback in the game for the fourth quarter might have produced a different outcome in their game (the Bills lost 16-10).

The blow to the head of the quarterback was preventable and should have been punished severely.  Sadly, it wasn’t (you may insert your favorite Patriots conspiracy theory here).

What would have happened if the same thing had taken place in Foxboro, Massachusetts and the recipient of the blow was none other than Tom Brady?

Ban the player from the game immediately and later institute a review to see if the hit was accidental.  If the helmet-to-helmet contact was preventable, then the offending player should be banned from further competition for a full season.

This is especially important for the NFL.  Losing a key offensive player (quarterback, running back or wide receiver) due to a preventable defensive play could cause less television interest in the team. With lower ratings, the networks will lose advertising revenues for the remainder of the season.

It’s time for football – at all levels – to ban players who inflict such hits from the game immediately (yes, a presumption of guilt) and, once confirmed after review, fine and/or ban the offenders from playing the game altogether.

These helmet-to-helmet hits had no place in the game during my lifetime, and they never should – now or in the future.

Vontae Burfict can be the poster subject for this new campaign.  The only way to get the desired outcome will be to severely punish bad behavior and incentivize a more traditional and safer way to play the game.

Hit them in their wallet or scholarship, and hit ‘em hard.