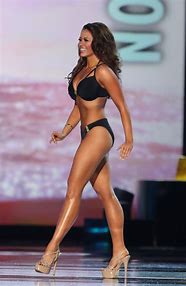 I was ready to write about another sports topic, but there was a different headline that grabbed my attention today.

According to the former Miss America of 1989, Gretchen Carlson, the swimsuit competition portion of Miss America is now history.

On behalf of the great majority of American men, this is a truly tragic turn of events!

Men of all ages have eagerly looked forward to watching fifty-one beautiful young women attempting to smile while they arduously tiptoed across the stage wearing high heeled shoes and a daring swimsuit.  Don’t forget the pressure of doing that in front of a packed auditorium and a national television audience after a week of eating very little or no food at all.

Meanwhile, women of all ages probably cringed when this fifteen minute swimsuit segment came on television.  Though much of the female cringing likely was directed toward their men fixated on a television screen while drooling at the same time (and who said that guys can’t do more than one thing at a time?), the ladies at home probably felt nearly as uncomfortable as the young women were parading across the stage.

C’mon, guys! Admit it.  If there was a corresponding Mister America pageant over the years, we would be equally as uncomfortable watching Buff Biceps from Boise, Idaho flexing his way across the stage knowing that he hadn’t swallowed an ounce of water in days nor eaten a slice of pizza since he was six years old.  Is that any way to judge a REAL man anyway?

To me, the whole concept of judging women in a national competition such as Miss America has always been as cringeworthy as hearing Bert Parks sing “There she is…Miss America!” after the winner was crowned (with a real crown, no less!).

How about the evening gown competition?  Isn’t that skewed against the shorter women, because the taller contestants generally seem to appear more graceful, don’t they?   And why is Miss California allowed to wear the solar-powered LED sequins on her black evening gown!  No fair!  Time for that part of the Miss America program to go, too.

Speak of biased, how can anyone say that the kazoo playing skills of Kathie Sue Loudermilk from Moreland, Georgia don’t exceed the talent being displayed by the tap-dancing Tina Terhune of Chattanooga, Tennessee?  How can any rational person make such a difficult decision about the more talented person?

At least we should all agree (men, women, contestants, audience, and space aliens watching via satellite) that the highly embarrassing “Question and Answer” portion of the Miss America program lends itself to unfair competition.

While one young lady gets the question, “Tell us, Miss Wyoming, what are you going to do to prevent tooth decay and gum disease in the homeless population in America?”  Then, Miss Maine (who just happens to be the niece of a judge’s pastor) gets the equally tough question of “Do you support spending more money to help save dogs and cats from being put into animal shelters?”

While we’re cleaning house, who picks the judges for the Miss America competition?  It is quite possible that some colorblind guy like me might be the one trying to make an honest decision on what score to give Miss Alaska, who was wearing that lovely red and green evening gown.  No, thanks.  There could be too much chance for bias in the judges, too.

Yes, America.  It is definitely past time for our great country to stop judging people based on their looks!

Well, I gotta run.  The Bachelorette is coming on television tonight!