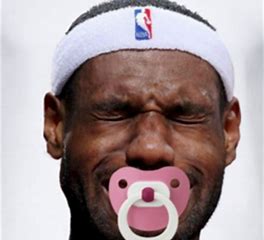 Hurray!  The NBA Finals are over, and, as many thought, the Golden State Warriors defeated LeBron James and the role players of Cleveland in four straight games.

After Friday night’s Game 4 loss, the Cleveland Cavaliers’ only real basketball player, LeBron James, told the fawning media that he played the final three games with a broken right hand.

Seems that the self-proclaimed “King” decided to vent some frustration over the team’s Game 1 overtime loss in Oakland by punching a whiteboard in the locker room afterwards.  Yep, that’ll hurt.

Over the subsequent three losses by LeBron and the role players of Cleveland, he also made it a big point to say how important it was for the others to step up because, try as he might, he just can’t carry the team by himself.

Especially since your temper outburst injured your own right hand.

The “LeFawn over LeBron” media lapdogs thought it was courageous and noble for James to hide his injured hand during the past three losses and avoid making it an excuse.

How would you like to play basketball with a guy who believes that he is the best player on the planet (he may or may not be) and that the rest of his team (every team he’s played on) is just a bunch of chump role players who need to do a better job?

With the highest payroll in the NBA this season of over $135 million, the ownership in Cleveland has done its job to give King Crybaby the toys he felt like he needed to win the NBA championship this season.  After LeBron’s $33 million, the rest of these role players were paid over $100 million per year!

The problem, as usual, is that LeBron James will never accept that basketball is a team sport.  He has the ball in his hands most of the game, so he never has a problem getting enough of his own shots.  The other four guys on the floor have to hope that James will be kind enough to pass them the ball every so often to help contribute, too.

God help you if one of those other four scrubs on the floor should happen miss a shot, though.  The greatest player in the history of the NBA (his belief) will demean you to the press afterwards and in the locker room, too.

In reality, nobody should really want to play on the same team with LeBron James.  The non-LeBron players have somehow learned that basketball is a team sport and that the teamwork and combined efforts of all five players usually leads to victory.

LeBron James, for all of his basketball talent, has never played in a system where the game does not revolve around him as the primary offensive weapon.  Not in high school and certainly not in the NBA.

Oh, yes, he has his MVP’s, scoring titles, and three NBA championship rings.  He’s had a career that most players would only dream of.

But the LeBron James legacy will always be of a spoiled petulant child who never learned to play with the other kids.

In all likelihood, he’ll take his talents somewhere else next year as even his home town fans in Cleveland should be tired of his shtick by now.

With a change of venues, he will also take his self-centered attitude and condescending commentary about his coach and teammates to yet another city.

Are there owners who would want to add his talent to their team?  You bet!  LeBron James means more sellouts for the home team, more merchandise sales, and more publicity.

But are there coaches and other teammates who will want to be thrown under the bus yet again by the biggest crybaby in NBA history?

The one thing you can count on from LeBron James will be another year of great individual statistics, a highly competitive personal fire, and the creation of yet another team of role players who don’t measure up to his personal standards.

A sincere “Thank you, Golden State” for sending the Cleveland CryBaby and this year’s assemblage of role players home again quickly in the NBA Finals.

Don’t come back now, ya hear?