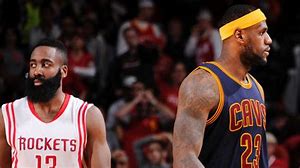 With the National Basketball Association’s conference finals in full swing, we are learning a lot more about the teams and the impact of their star players.

In ten games played during the NBA playoffs’ first and second rounds, some of the Association’s biggest names have lifted up stellar individual performances of 40 points or more.

LeBron James had three games with 40 or more points in the first round against Indiana.  He added 43 more points in Game 2 of the Cavs’ second round sweep of Toronto.

In Houston, the Rockets’ James Harden poured in 44 and 41 points during the team’s first game of series against Minnesota and Utah, respectively.

His running mate, Chris Paul, added 41 points in game 5 of the second round game versus Utah.

Anthony Davis of New Orleans shined with 47 points during the Pelicans’ round one sweep over Portland.

In all but Russell Westbrook’s 46 during Game 6 against Utah, the team with the player scoring 40 or more points was victorious.

That’s nine out of ten for an amazing 90% winning percentage.

Then, the Conference Finals happened.

After the first two games each of the Eastern Finals (Boston vs. Cleveland) and the Western Conference Finals (Houston vs. Golden State), superstars scoring 40 points or more are now 0-2 during this round.  Cleveland’s LeBron James put up 42 points during a Game 2 loss at Boston on Tuesday night, while James Harden danced his way to 41 points against Golden State but his Rockets dropped Game 1 at home.

For Cleveland, LeBron’s insistence that his teammates play up to his expectations has been a personal weakness for years.  When your teammates grow accustomed to playing second fiddle, it is hard to expect those same players to step-up when they have been excluded from the limelight for most of the season.

In Houston, James Harden put on a Game 1 performance against the Golden State Warriors worthy of making him a lock for a future “Dancing with the Stars” season.  He dribbled, danced, dodged, and stepped-back for twenty seconds of the 24-second clock on numerous occasions, while Golden State’s other 4 defenders were catching some rest watching the other four Rockets’ players stand around.

Despite comments by Houston’s coaching staff that nothing would change in Game 2, Harden seemed somewhat surprised in watching some of his more unheralded teammates rise to the occasion as the Rockets “other guys” ran the Warriors out of the Toyota Center during Wednesday night’s rout.

By this stage of the NBA playoffs, it’s nearly impossible to win with just one dominant player doing most of your team’s scoring.

The Boston Celtics have taken a 2-0 series lead against LeBron James and the Cavs with a superb effort from all of their young players, talented bench, and impressive coach, Brad Stevens.  The C’s rely on a different array of players every game, and their coach optimizes a different set of hot hands nearly every game.

The defending champion Golden State Warriors have the luxury of several star players, a deep and talented bench, and a never ending supply of energy on the court.  Game to game, it has been difficult to predict who will lead the Warriors in scoring.

For Cleveland and Houston to move into the NBA finals, it’s time that LeBron James and James Harden sacrifice some of their own scoring to get their teammates more involved.  The Rockets did just that in Game 2, while the Cavaliers need to scramble quickly as they face a 0-2 deficit entering Saturday night’s Game 3 in Cleveland.

The stats have shown that one talented superstar may be able to carry the day during the early rounds of the playoffs.  In these 2018 Conference Finals, though, forty point scoring nights are more likely to earn your team an early vacation in Cancun.