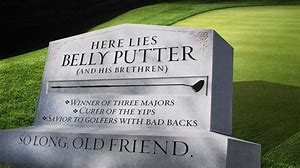 During the early 2000’s, professional golfers had been increasingly utilizing the long-handled golf club called a belly putter.  The handle of this aptly named extra-long putter would be anchored against the golfer’s midsection to help steady shaky putting hands, especially on short range attempts.

After more and more golfers won more and more tournaments utilizing this odd putter and putting style, golf purists worldwide took note and decided to end this practice to keep the art of putting consistent for all.  Thus, the United States Golf Association decided to ban the use of the long putter and the process of anchoring the putter beginning January 1, 2016.  The USGA even provided golfers a series of videos to explain the rule change.

How would this rule change affect the golfers who had been utilizing the belly putter?  After all, putting is only a portion of the golfer’s game, right?

Don’t tell that to Webb Simpson.

In 2012, the young Wake Forest product (then only 26 years old) utilized his belly putter in winning a major championship at the U.S. Open at the Olympic Club in San Francisco.  Simpson earned his way onto the 2014 U.S. Ryder Cup team.

After the ban on utilizing the belly putter, though, Webb Simpson plummeted from #34 to #177 in strokes gained putting on the PGA tour.  He went into a protracted slump after losing confidence in his ability to swing the flat stick on the greens.

One year ago at the Players Championship in Florida, Simpson received a tip on the putting green from fellow PGA member, Tim Clark.  Clark, a belly putting specialist prior to the 2016 ban, suggested that Simpson consider utilizing an unorthodox “claw” grip where the club golfer’s right hand is draped over the top of the putter.

Taking the advice to heart, Webb Simpson developed his own unique style with the “claw” method, and his putting statistics started to rise.  He finished 2017 up to #88 in putting.  In 2018, his improvements on the green have continued to catapult Simpson into the top ten for the first time in his career.

On Sunday, just one year after receiving that confidence-building putting lesson at the Players Championship, Webb Simpson’s putting propelled him into the winner’s circle again for the first time in four years.  Simpson was an incredible 19-under par entering the final round at this year’s Players Championship and took the first tee with whopping seven shot lead.

The likeable Simpson, who was just as phenomenal off the tee over the weekend, coasted to an easy four shot victory Sunday.

At the age of 32, Webb Simpson is officially back.  Having clawed his way all the way back from golf’s putting abyss, the prime of his golfing career awaits.