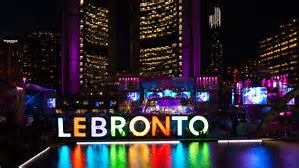 A week ago, I wrote about how the NBA’s Cleveland Cavaliers and LeBron James had the number of the Toronto Raptors.  Not a guy to gloat (cough), I was correct when saying that Toronto desperately needed group counseling as they had lost all confidence when playing Cleveland in the playoffs.

After concluding yet another playoff sweep this week, Toronto’s losing streak to Cleveland is now ten in a row covering the last three seasons.

As a result, Masai Ujiri, team president of the Toronto Raptors, just fired the most successful coach in the team’s history, Dwane Casey.

In a poll of NBA coaches released earlier this week, Dwane Casey garnered the most votes from his fellow NBA coaches for the coveted Coach of the Year award.  Casey took the Raptors to the #1 seed in the NBA’s Eastern Conference with a team record 59 wins.

Since coming to the Raptors seven years ago, the 61-year old Casey has led Toronto’s hoops team to the most victories by any coach since the team came into The Association in 1995.  The team has won over 50 games per year for three seasons in a row and has competed in the NBA playoffs for five consecutive seasons under this coach.

Match-ups mean something in basketball.  That’s why the Indiana Pacers, the fifth place team in the East, took Cleveland to seven games before losing the final game in Round 1.  The Pacers defense clamped down on the non-LeBron players for most of the series.  Only a superlative series of games by James saved Cleveland from a first round exit.

Coaches don’t shoot the ball, rebound, hustle, and play defense.  Coaches aren’t on the court to contest the league’s designated freight train when he is allowed to handle the ball from one end of the court to the other.  LeBron James, with a wink and a nod, knew that Toronto’s key players doubted their own ability to win in this series.

Not that Coach Casey didn’t choke at key times, either.  In Game 3 in Cleveland, Toronto tied the game with eight seconds left.  Even my lovely wife knew who the Cavs would get the ball to.  Yep, #23 was allowed to receive the inbounds pass.  LeBron James was not double-teamed, dribbled the length of the court, and connected on a 15-footer to scorch the Raptors – again.

Toronto’s team president, Masai Ujiri, couldn’t find the right words to explain why he just sent one of the NBA’s top coaches to the unemployment line.

“There’s nothing in particular that coach Casey did wrong, but I think it was time for this to happen,” Ujiri said.

I realize that this probably won’t happen (mostly for tax purposes), but I could envision Toronto making LeBron James (a free agent after the NBA playoffs end) an offer he can’t refuse.

According to one source, the Toronto Raptors are worth about $1.4 Billion.  Perhaps Toronto might offer LeBron a piece of the franchise ownership (let’s say 10%) in return for James becoming a player/coach for the Raptors beginning next season.  Once LeBron retires, he could then become the General Manager for the team.