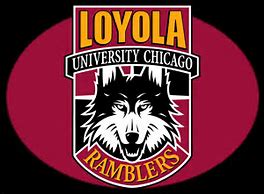 It’s not even the start of the NCAA’s college basketball playoffs (affectionately known as “March Madness” – even though the final game will occur on April 2?).  Last weekend, though, I found my Cinderella team for this year’s tourney and am ready to ride the wave of hoops euphoria into an upset or two (or three…).

Ladies and gentlemen – Meet the Ramblers of Loyola – Chicago!

This is a team which hasn’t been dancing in the NCAA’s annual basketball tournament since 1985.  That was even before the NFL’s Chicago Bears danced into America’s hearts with the Super Bowl Shuffle as they obliterated their football competition in winning the city’s only Super Bowl trophy.

Loyola University in Chicago grabbed the Missouri Valley Conference championship last weekend in St. Louis (aptly named “Arch Madness”) with a resounding 65-49 thumping of Illinois State.  The Ramblers plowed through the MVC with a 15-3 conference record and sport a sparkling 28-5 overall mark.  The team is ranked #4 nationally in fewest points allowed per game.

The Ramblers are riding a ten game winning streak heading into the NCAA tournament.  Loyola-Chicago has trouble getting the “name” schools to come play them, but they grabbed an impressive road win in beating the University of Florida 65-59 in Gainesville in early December.  These guys can play.

This squad also has momentum and is led by a group of hungry seniors who want to keep playing basketball together.  This isn’t a team built with “one and done” players like Kentucky and Duke, for example.

One of them is a 6’6″ homegrown Chicago high school star who felt more at home with Loyola than playing for one of the big name schools.  Donte Ingram won the Missouri Valley tournament’s MVP award last weekend as he continues to demonstrate that Chicagoland players can grow their game and play for a winning college team without having to leave town.

Want more?  Two of the starting senior guards on this team have been playing ball together for a long, long time.  Would you believe since the third grade?  Clayton Custer and Ben Richardson came to Loyola-Chicago from Overland Park, Kansas where they grew up only 15 houses apart from each other.  This formidable backcourt tandem won two high school basketball championships together.  They think alike on the court, wear #13 and #14 (of course) and can breakdown a defense with their penetrating drives and accurate 3-point shooting.

History?  Chicago-Loyola has one NCAA basketball championship to its credit back in 1963.  That team made waves in the 1960’s by becoming the first national champion to start four black players as they defeated the University of Cincinnati in the final game.

And what about that odd nickname, Ramblers?  Though I figured it might have something to do with my Dad’s 1966 station wagon made by a company which used to go by the same name, Loyola-Chicago’s nickname travels back in time to the year 1926.  At that time, the school’s athletic program had to travel far and wide to find opponents to play games.  Thus they “rambled” across the land in search of finding athletic contests.  Amazingly, after 92 more years, they still do.

So, bring on the ACC, the Big Ten, and the rest of the big boys starting next week.  They better bring their “A” game, because, after 33 years of waiting to get back into the NCAA’s big dance, these Ramblers know how to travel and are planning to stay on the dance floor for as long as they can!