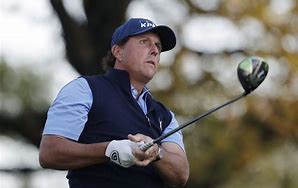 On Sunday, two of professional golf’s biggest fan favorites charged from behind to win for the first time in several years.

Neither of them was named Tiger Woods.

The ageless Phil Mickelson rallied down the stretch to win the PGA tour’s World Golf Championships event in Mexico City in a playoff with rising star Justin Thomas.  Lefty’s par on the first hole of sudden death gave Phil his first win since a dramatic 2013 duel with Henrik Stenson in the British Open.  It marked the 43rd PGA title of his career as Mickelson currently ranks ninth on the all-time victory list.

Meanwhile, the LPGA tour received a welcome shot in the arm when American Michelle Wie rolled in a 35-foot birdie from just off the green on the final hole of a tournament in Singapore to win her first tour event since the 2014 US Women’s Open.

For the 47-year old Mickelson, Sunday’s victory in Mexico was a typical Phil-the-Thriller.  Justin Thomas had seized the lead after posting a weekend scorecard of 62-64 including a rare eagle on the finishing par-4 18th hole Sunday.  Phil found himself down by two shots with just four holes to play.  Mickelson’s putting was solid all weekend as he rolled-in a twenty foot putt on the 16th hole to tie JT and then converted two solid par-saving putts coming in.

For the 28-year old Michelle Wie, the putting demons which have plagued her the past several years seem to have remained in the locker room this weekend as she fired a 7-under par 65 for her victory.  Wie, who is 6’1″ tall, has utilized a very odd putting style the past few years.  If you’ve seen one of those bobbing drinking storks before, that is what Wie has looked like over a putt.  Wie has said that she sees the putting line best when her head remains over the ball, but her posture has looked quite uncomfortable, at best.  At least for this week, Michelle Wie’s putting was good enough to post a long-overdue win.

And, for golf fans, having two of America’s favorite players take home a trophy on the same weekend is a much needed shot in the arm for 2018’s remaining professional golf schedules.  Though taking nothing away from the young talent on both the men’s and women’s tours, some of golf’s more casual fans are more likely to tune into television coverage and show-up at local events when some of the more famous American golf names are involved in the mix.

During NBC’s coverage of the PGA tour event in Mexico City today, the announcers said that advance ticket sales for next week’s event at the Innisbrook Golf resort near Tampa have zoomed after Tiger Woods added his name to the field.  Even though Tiger’s best showing during his recent comeback has been an 11th place finish at the Honda Classic in southeast Florida a week ago, having him in the field has amped ticket sales and media coverage.

Though I am not a Tiger Woods fan, there is little doubt that having him in the field this coming week at the Valspar Championship is a good thing for adding to the excitement at the event and a boost for NBC’s television viewership.

As two of golf’s fan favorites have now posted wins and are challenging the young whippersnappers, it looks like 2018 is off to a very interesting start for golf fans.