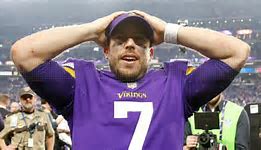 From career journeyman quarterback to the “Minneapolis Miracle” to starting quarterback in the Super Bowl?  Yes, it’s possible to make the case as Case Keenum is on a magical “Please don’t wake me up just yet” roll right now.

The back-up quarterback for the NFL Central Division champion Minnesota Vikings is just one win away from bringing his team back to Minneapolis to become the first team to host a Super Bowl in a few weeks.  Of course, the Philadelphia Eagles stand in the way this weekend.  The Philly fans will be every bit as loud and frenzied at the Vikings fans were on Sunday during their wild playoff win over the New Orleans Saints.  It will be a war.

For Case Keenum, though, this season has been a dream come true.  After setting several NCAA career passing records with the University of Houston Cougars, Keenum (who graduated with a business degree from UH) found himself passed-over by all 32 NFL teams and became an undrafted free agent.  In 2012, he signed a contract with the hometown Houston Texans where he spent his first NFL season on the team’s practice squad.

The next season, Case Keenum became the Texan’s third string quarterback behind such non-household names as Matt Schaub and T.J. Yates.   By week 7, Keenum finally found the NFL field and responded with a solid 271 yards passing in a 17-16 Houston loss.  Alas, Keenum finished the season going 0-8 as the Texans’ starting quarterback in 2013.

In 2014, the Texans waived Keenum, but he was picked-up by the St. Louis Rams.  Unfortunately, he was cut (again) so the team could add a defensive back to the roster.  Late in the season, the Houston Texans picked-up Keenum again, and he responded by leading the Texans to wins in the final two games of the season.

In 2015 and 2016, it was more of the same for Case Keenum.  The Rams signed him again, and he spent two more seasons with the team with mixed results.  The words “Career Back-up” were becoming synonymous with Keenum.  His passing statistics proclaimed the same verdict.  Case had thrown just about as many interceptions (20) as touchdown passes (24) leading up to this season.  It is highly doubtful that anyone other than his immediate family (maybe) selected him during the 2017 fantasy football drafts after Keenum had signed with yet another team – the Minnesota Vikings.

The Vikings management saw something they really liked in Case Keenum.  Signed for $2 million as an “insurance policy” back-up quarterback for starter Sam Bradford, Case Keenum was expected to do what he has done best in his NFL career…sit and wait.  However, after an injury benched the starter, Case Keenum has grabbed the reins of his team and guided the Vikings to an 11-3 record in leading Minnesota into the playoffs this season.

Last Sunday, Keenum became a Minnesota legend when he lofted a pass to wide receiver, Stefon Diggs, on the last play of the game.  Diggs leaped into the air as a New Orleans Saints defender missed the tackle, and then the speedy receiver turned the play into a 61-yard touchdown pass to win the game.  The Minneapolis Miracle was the play of the season in the NFL and will be remembered by fans in Minnesota and in Louisiana (for the wrong reasons) for a long, long time.

As the Vikings travel to Philadelphia to play the Eagles for the NFC championship on Sunday, Case Keenum’s value has suddenly leaped as well.  Some sources believe the Keenum could make upwards of $20 million/season if he takes the Vikes to the Super Bowl.  That’s what leading your team to victory while tossing 21 touchdowns and only 7 interceptions in a season will do for you.

For a 29-year old guy who was simply happy to be making a paycheck in the NFL, this has been a dream season for the humble Case Keenum.  If his Vikings defeat the Eagles and play at home in the Super Bowl in two more weeks, he will never have to buy another dinner in Minneapolis for the rest of his life.

Whatever happens next, Case Keenum has probably had more fun than anyone else in the NFL this season.  After going 11-3 off the bench, leading his team to the playoffs, and tossing the winning touchdown in the Minneapolis Miracle, Case Keenum will become an unrestricted free agent soon and can sign a new contract with any team he chooses.

For all of the 32 NFL teams who passed on him during the 2012 player draft, Case Keenum has earned the right to wear a big grin as he will get the last laugh after all!