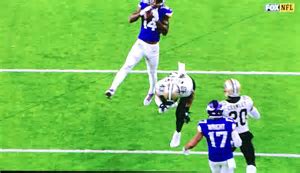 In Minnesota, they called it “The Minneapolis Miracle”.  I’m calling it “The Whiff”.

For the NFL’s Minnesota Vikings, the heroes included journeyman quarterback, Case Keenum, tossing a last-second pass toward the sidelines to wide receiver Stefon Diggs.  The Vikings were hoping Diggs could grab the ball, get out of bounds, and then attempt a 50-60 yard field goal for the win.  Instead, Diggs rose up to make a terrific catch, turned upfield along the sidelines and ran into the end zone for a touchdown as the clock hit zero.  Just like that, game over.  Vikings win!

For the New Orleans Saints, rookie defensive safety Marcus Williams had just intercepted a Case Keenum pass earlier in the fourth quarter.  He saw the final desperation heave coming his way.  Williams zoomed in on Minnesota’s Diggs and, well, he completely missed the tackle.  He tried to go low and take-out Diggs’ legs and, unfortunately for Saints fans, he whiffed.  Williams not only went completely underneath the leaping Diggs, but he also took out the only other New Orleans defender nearby at the time.  Diggs caught the ball, tap-danced along the sidelines, and scampered 61-yards for a score to end the game and a terrific rally by quarterback Drew Brees and the Saints in the fourth quarter.

As a long-time Saints fan, I know that Vikings fans feel like they were robbed back in 2009 when the Saints won a wild NFC playoff game over Brett Favre (yes, that one) and the Vikes on the Saints path to a Super Bowl victory.  That was during the so-called “BountyGate” season where Saints defenders were allegedly being rewarded for taking down key players on the opposing team.

Vikings fans never forgot that game.  After Minnesota scored the shocking final touchdown on Sunday evening, I received a taunting text message from an out-of-state friend who happens to be a lifelong (and long suffering) Vikings fan.  While I was slightly miffed about the Saints bizarre loss, it reminded me that the Minnesota Vikings have been to four Super Bowls and have lost all four times.

Fortunately for Minnesota fans, the majority of casual football fans remember the Buffalo Bills first when they think about Super Bowl futility.  In Super Bowl 28, the Bills dropped their fourth consecutive big game appearance in losing to Troy Aikman’s Dallas Cowboys.  For Minnesota, their 0-4 record in the big game came in losses back in Super Bowls 4, 8, 9, and 11.  Vikings fans are ready to get back to the finals again and end their futility streak.

While the New Orleans Saints’ loss was emotionally draining, the Pittsburgh Steelers’ loss to Jacksonville was downright embarrassing.  The AFC #2 seeded Steelers were supposed to redeem themselves after October’s stunning 30-9 loss to the Jaguars.  The Steelers, though, apparently didn’t learn very much from the prior encounter as Jacksonville jumped to an early 21-0 lead and never trailed in winning the divisional round playoff game, 45-42.  The Steelers’ previously-vaunted Steel Curtain defense looked more like a torn mosquito net in surrendering 75 points this season in two games against the Jags’ normally plodding offense.

Steelers’ quarterback, Ben Roethlisberger, did his part to rally Pennsylvania’s black and gold in the second half with 469 passing yards and a playoff record five touchdown passes.  Unfortunately, he also lost a fumble which translated into a Jaguars touchdown.  Make no mistake about it – the better team won in Pittsburgh.

So, it’s back to the drawing board for the Saints and Steelers.  Both black and gold squads spotted their playoff opponents a significant first half lead.  In the playoffs, handing your opponent an early advantage will generally come back to haunt you.

So, “Skol“, Vikings!  It also looks like those 8-year old Saints’ voodoo dolls you purchased finally did the job!