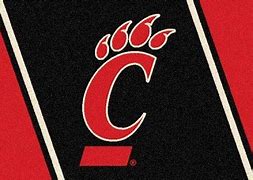 After the first weekend of college football in November, there are now just four unbeaten teams remaining out of the 130 large division BCS schools.  Oklahoma, Georgia, Cincinnati, and (are you ready?) UT-San Antonio stand alone as only teams which have can boast of being undefeated through week #9 of the regular season.

What are the chances that each of these four teams go unbeaten the rest of the way?  Let’s examine each team and see what dangers are lurking:

If you like the word “equity”, you will now find it at the bottom of the BCS 130 as both the UNLV Running (on Empty) Rebels (which won on the road at 3-6 New Mexico State 31-17) and the Arizona Mildcats (which scored a late touchdown to defeat equally moribund 3-6 California “Boo Boo” Bears by a 10-3 final score) finally won their first game of the year on Saturday.  Every BCS team has now won at least one game!  It was quite neighborly of New Mexico State and Cal to help those two teams regain a little bit of self-esteem.  As a result, there are now ten teams which have one win apiece.  Who will finish as this year’s worst team?  We’ll give you an update soon.  Stay tuned…

The Associated Press rankings this week have three (count ‘em) three-loss teams in their top 25.  Auburn was ranked #16 after the 6-3 War Eagles were handily thumped 20-3 by 7-2 Texas A&M Saturday.  The AP really loves the Big Ten!  Though I have four (based on merit), there are six Big Ten teams in their Top 25 with 6-3 Wisconsin Badgers (#20) and 6-3 Penn State Nittany Lions (#23) joining the party.

No disrespect meant to any of the fans of those three teams, but the SwampSwami.com College Football Top 25 rankings gives most weight to teams with the fewest losses.  From there, I evaluate each team to find their “best” win of the season with extra value for those wins coming on the road.

Let’s check out my rankings for the week ending Saturday, November 6, 2021: 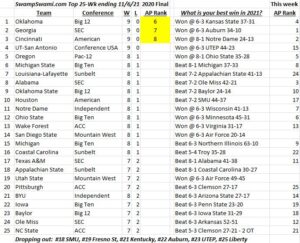