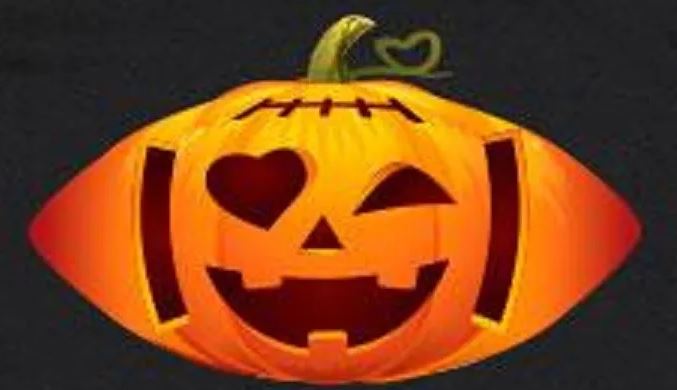 This season has been loaded with several big surprises and a few very sad teams who are probably ready to get this season completed ASAP.

With this being Halloween, let’s take a look at a few teams which deserve extra treats tonight and a few football teams who might prefer just to stay home on this spooky night:

Treats!  Michigan State should find some extra Snickers in their bag tonight as they are now having the last laugh on Halloween, 2021.  After 13 mostly successful seasons under former coach Mark D’Antonio, Sparty brought in a new head coach named Mel Tucker.  After a throw-away 2-5 season in pandemic plagued 2020, Michigan State has rebounded in a big way in 2021.  The Spartans rallied from a big deficit on Saturday against arch-rival (and formerly unbeaten) Michigan to grab a 37-33 win and move to 8-0 this year.  Tucker is now a hot name in LSU’s search for a new head coach to replace Ed Orgeron.  MSU is likely to up the ante to keep Mel Tucker after the big win over Michigan.

Tricks?  Florida’s Wally Gator isn’t happy after being shellacked by rival Georgia 34-7 on Saturday in The World’s Largest Cocktail party in Jacksonville.  Though head coach Dan Mullen is widely touted as a quarterback guru, his duo of quarterbacks have been tossing interceptions like some parents will be tossing mini-Milky Way bars into kids’ trick-or-treat bags tonight.   Despite people saying that Anthony Richardson is the next Tim Tebow, I just don’t see it.  After dropping consecutive games to LSU and Georgia, Florida is a disappointing  4-4, but the schedule might allow them to save this season and Dan Mullen’s job.

Treats!  Wake Forest is named the Demon Deacons.  How appropriate for tonight’s Halloween festivities, eh?  Before this season started, would you have believed that, before November 1, Wake Forest would be leading the ACC?  Would you believe they are leading the conference today…by two games?  The Deacs are 8-0 and #5 in the SwampSwami.com Top 25 poll this week.  After musical group Steely Dan wrote a hit song called “Deacon Blues” which lamented how badly this school’s football team had performed in years gone past, perhaps Donald Fagan should now produce a follow-up tune titled, “Happy Deacs are Here Again”!

Tricks?  Longtime fans of the University of Texas Longhorns are ready to pull-out the remaining hair by now.  The Hook ‘ems are great at grabbing an early lead, but this team hands-out victories to their opponents in the fourth quarter as frequently as I will be clearing out the cheapest candy first at my front door tonight!  Even with former Bama offensive coordinator Steve Sarkesian now in charge, Texas is now 4-4, losers of three straight games, and is fading fast in a very tough Big 12 Conference race this year.

Treats!  Auburn has surprised many SEC fans by racing out to 6-2 record this year under former Boise State coach Bryan Harsin.  Harsin, a former Boise State quarterback himself, has lit a spark under Auburn’s long-time underachieving signal-caller Bo Nix.  Anyone who watched Bo Nix’ performance at LSU several weeks ago can see that he is playing with more confidence than at any time in his Auburn career.  After handily taking down Ole Miss Saturday night, Auburn fans are being treated to a magical season.  Better watch out, Bama.   These guys are on a giant Halloween-sized Tootsie Roll!

Tricks?  After Indiana finished the 2020 season ranked #12 at 6-2, the expectations for this year’s Hoosiers were lofty.  After eight games, Indiana has flipped to 2-6 and has been a major disappointment this season.  After losing to Maryland on Saturday, IU now must go on the road to play at 7-1 Michigan next Saturday.  This year’s Hoosier team is still capable of scaring up a solid game, their post-season hopes have vanished like Casper the Friendly Ghost.

Speaking of ghosts, has anyone seen Arizona or UNLV yet?  Both are still perfectly ghastly with identical 0-8 records so far in 2021.

Time to shake the cobwebs off and bring you the Halloween version of the SwampSwami.com College Football Top 25 rankings for the week ending October 30, 2021: 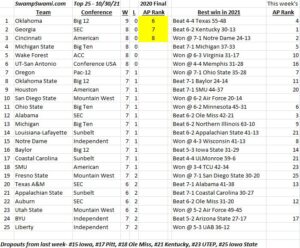