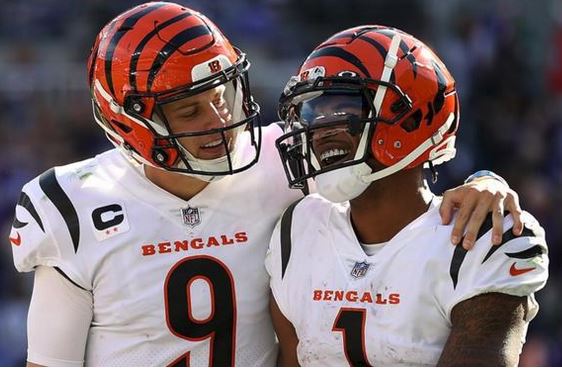 Less than two years ago, Ohio native Joe Burrow quarterbacked the LSU Tigers to the national championship as the team finished with a perfect 15-0 record.  He earned the Heisman Trophy and nearly every other national quarterback award after that incredible season.

A few months later, Ohio native Joe Burrow was selected by Ohio’s very own Cincinnati Bengals with the first pick in the National Football League draft.  Statistically speaking, the #1 pick goes to the team which had the worst record in the previous season in the NFL.

The Cincinnati Bengals earned that dubious distinction by finishing the 2019 season with a pitiful 2-14 record.

Though the Bengals have advanced to the AFC Wild Card game seven times over the past 30 seasons, that also means that the team has missed the playoffs three out of every four years, too.

It’s hard to believe that Cincinnati has appeared in twice as many Super Bowls as the New Orleans Saints (1).  The Saints made the most of their one appearance by winning the Super Bowl after a fabulous 2009 regular season.  The Cincinnati Bengals are 0-2 in the big game since coming into pro football back in 1968 as part of the former American Football League.

Perhaps that’s why this team has been called the “Bungles” for many of their seasons due to a history of underachievement on the field.

When Ohio native Joe Burrow’s name was called as the first pick of the draft two years ago, the people of southern Ohio rejoiced.  They had just watched their favorite quarterback languish on the bench in Columbus while waiting his turn to play for Ohio State.  Burrow kept his focus on his studies at Ohio State and finished his undergraduate degree in consumer and family financial services in just three years.  Then it was time to evaluate his options and find another place to play football before his college eligibility ended.

Burrow took his talents south all the way to LSU with two seasons of college eligibility.  The Bengal Tigers had a reputation as a perennial contender nearly every year, but the school rarely featured a top level quarterback.

This was a marriage of two parties needing each other.

After earning the starting job at LSU in his first year in Baton Rouge, his Tiger teammates rolled-up a nifty 10-3 record in 2018 and finished #6 in the final AP poll.  Meanwhile, Joe Burrow kept working hard in the classroom at LSU, too.  He would eventually walk across the stage at the Pete Maravich Assembly Center to collect his Master’s degree in Liberal Arts within days after picking-up college football’s Heisman Trophy. 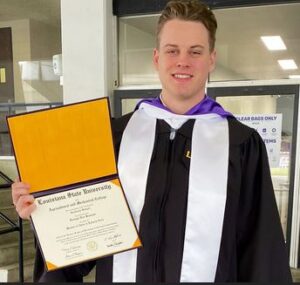 While accepting the Heisman Trophy in New York City, Joe Burrow made a sincere pitch to the nation to please help the local food bank back home in rural Athens County, Ohio.  Over 13,000 people from around the country donated nearly $500,000 as a result of Joe Burrow’s sincere plea for assistance for his hometown that night.

Even while he was adopted as “family” during his two years in the Bayou State, Joe Burrow still loved his home state of Ohio.

During his rookie season with the Cincinnati Bengals in 2020, Burrow sustained a devastating knee injury which ended his season in Week 11.  The Bengals would finish the pandemic-plagued campaign with just four wins against twelve losses.  That wasn’t exactly what the fans or Joe Burrow had in mind.

Cincinnati’s young coaching staff seemed as hungry to turn this team around as their new quarterback.  An offensive specialist on his way up the coaching ladder, Bengals’ head football coach Zac Taylor (just 35 at the time he was hired) and first round draft pick quarterback Joe Burrow immediately bonded in the Queen City of Ohio.

With an eye for identifying offensive talent, coach Taylor also added Clemson’s standout wide receiver Tee Higgins with his second round draft pick in 2020 after selecting Burrow at #1.  This year, the Bengals took Joe Burrow’s favorite receiver at LSU, J’Marr Chase, with the team’s first round pick.  The Cincinnati offense has been on the upswing ever since.

Meanwhile, the Cincinnati Bengals defensive draft picks in the past two seasons along with a few key acquisitions have begun to start to pay dividends in 2021.

As of this writing, the Bengals are 5-2 after going into Baltimore last Sunday and throttling the favored Ravens 41-17 to gain a share of the AFC Central lead.  QB Joe Burrow led the way with over 400 yards passing with his LSU wide receiver J’Marr Chase making the national highlight shows with an amazing 82-yard touchdown catch and run.

With five wins already, the Bengals have more wins than either the 2019 (two) or 2020 (four) teams achieved.  The old chants around Cincinnati about “Who Dey say gonna beat dem Bengals” (a ditty borrowed from the New Orleans Saints) have returned around town recently.

Though Joey B wears the same #9 jersey of his football idol Drew Brees of the New Orleans Saints, his leadership example of hard work and intense game focus is rubbing off on his professional teammates in Cincinnati just like it did during his two years at LSU.

With two college degrees, Joe Burrow knows how to focus on the fundamentals while putting-in a little extra work off the field every week to be successful.  His teammates are buying into it, too.  The Bengals offense is ranked #13 (out of 32 NFL teams), but the surprising Cincinnati defense is now #9 in the league after another dominating performance.

As the 3-3 Pittsburgh Steelers now find themselves on the bottom of the AFC Central Division for the first time in recent memory, the surprising Cincinnati Bengals are rising fast and pushing hard to make the playoffs for the first time since 2016.

If there is a moral to this story, it is this.  Turnarounds can happen quickly in the NFL – given the right circumstances.

Though the New York Jets (1-5), Jacksonville Jaguars (1-5), Houston Texans (1-6) and the Detroit Lions (0-7) are an accurate representation of a history of inept management, the Cincinnati Bengals are showing that a supportive ownership can piece together a winner with series of smart moves.

While Cincinnati’s 5-2 record is quite impressive, the Bengals’ historically prudent spending puts this year’s team salary expense at #22 ($188 million) in the 32-team NFL in 2021.  This team isn’t winning because it spends money on players like billionaire Jerry Jones in Dallas (#1 at $254 million this year).  The Cincinnati Bengals organization has made prudent decisions in hiring their coaching staff, drafting quality players, and sprinkling in a few key free agents at the right value for their franchise.

It doesn’t hurt for the Bengals to have one of the NFL’s most talented (and hard-working) quarterbacks in the league throwing the football to a couple of college football’s most dominating wide receivers from the past few seasons, either.

“The Joe Burrow Magic Show” is now on display in Cincinnati.  For LSU football fans looking for a little bright spot this fall, the amazing transformation of Cincinnati’s Bengal Tigers in Ohio are bringing back some fond memories of their glorious national championship season just two years ago!