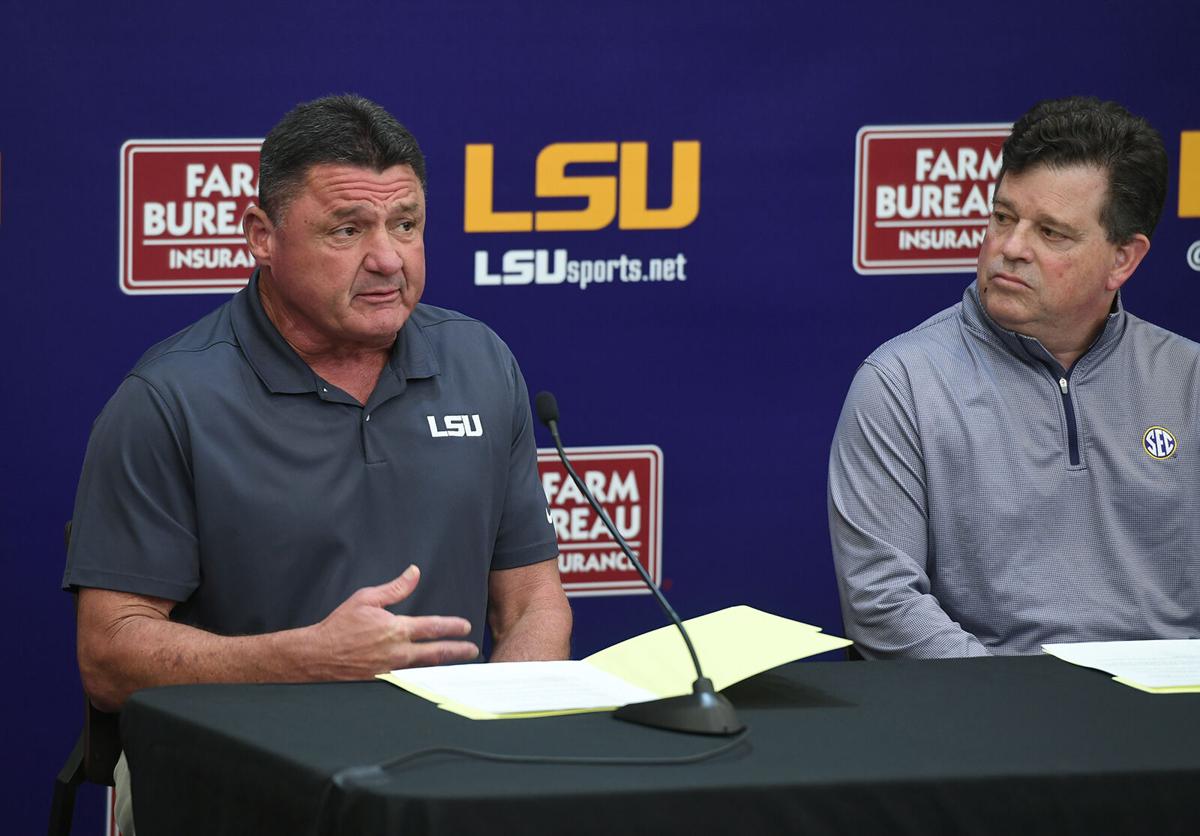 On Sunday, LSU head football coach Ed Orgeron and Athletics Director Scott Woodward stood on the same podium to announce that an agreement had been reached to relieve Coach O of his job at the end of this season.

This is the same coach who was named the Associated Press National Coach of the Year less than two years ago during LSU’s historic 15-0 national championship season in 2019.   Since winning it all, the LSU Tigers went a pedestrian 5-5 in 2020 (after winning their final two games).

In 2021, the Bayou Bengals were 3-3 and coming off a 42-21 shellacking at the hands of the Kentucky Wildcats the week before.  Though LSU would rebound with a 49-42 victory over the equally moribund Florida Gators last Saturday, a deal to relieve Coach O of his coaching duties in Baton Rouge was already in the works before that game was played.

AD Scott Woodward is also a graduate of LSU (Political Science).  He built a successful resume during his first big gig as the Director of Athletics at the University of Washington (2008-2016).  He did it again at Texas A&M as their AD from 2016 to 2019.

After accepting the job at Washington, Woodward took over after the school’s football team finished the year with an embarrassing 0-12 season and the budget had posted a nearly $3 million annual loss.  The new AD would lure successful Boise State football coach Chris Peterson to the school to turn around the football fortunes.  He orchestrated a $200 million renovation of the Huskies’ football stadium.  More importantly to his bosses, the school’s athletics program more than doubled its annual revenues under Woodward’s guidance.  The treasure chest was growing.

If you step back and evaluate Scott Woodward’s performance as a college athletics director, you will notice that all of his splashy hires have been “name brand” successful winning coaches.  He also paid them quite handsomely to entice their change of coaching addresses.

In 2019, Scott Woodward was hired to become the new Athletics Director by his alma mater.  A Baton Rouge native, he considers the LSU position to be his “dream” job.

He replaced Joe Alleva – a man who was generally despised by most LSU Tiger faithful.  Alleva botched the firing of former football coach Les Miles and was later turned down by both Jimbo Fisher and then University of Houston coach Tom Herman.  Ed Orgeron, by default, was named LSU’s new head football coach in 2016.  Scandals subsequently rocked the LSU athletics department during Alleva’s tenure with the school.

Enter Scott Woodward in 2019.  The man with the golden touch now is calling the shots for his own alma mater’s athletics programs.

If anyone in the college athletics world should know how fanatical LSU football and baseball fans are, it would be Scott Woodward.  He grew up an LSU fan, went to school there, and has come back to town with the intentions of winning national championships in every single sport.

After presiding over the LSU football team’s national championship season in the fall of 2019, Woodward kept a close eye on the university’s cash cow football program.  LSU football annually contributes about $80 million of the $140 million generated by the school’s athletics programs.   Put another way, every LSU home football game generates about $10 million in revenue for the school.

The LSU baseball and men’s basketball programs are the only non-football programs which generally post a small profit every year.  For the remainder of the men’s and women’s athletics programs, the large profits generated by the Tigers football program are utilized to cover their expenses.

With thousands of unsold tickets at Tiger Stadium thus far in 2021, it doesn’t take a math major to know that losing over $100 per unsold seat during conference football games means millions less in profits for the school’s cash cow football team this season.

On Sunday, Athletics Director Scott Woodward (who did not hire Ed Orgeron) agreed to bankroll nearly $17 million in future payments to Coach O to quietly leave the program at the end of this season.  By doing so, he turned on a bright purple and gold “Now Hiring” sign which is flashing brightly for all of the nation’s college football coaches to see.

Scott Woodward understands that spending $17 million over the next few years to pay off Ed Orgeron is a relatively small down payment if you consider that your college football team is capable of recovering that short-term loss quickly if the next football coach can excite the fan base (and sell more season tickets) once again.

In April, LSU women’s basketball coach Nikki Vargas (who had taken the team to the NCAA tournament five times in ten seasons) resigned to take a position with a WNBA team.   Within weeks of that announcement, AD Scott Woodward shocked the basketball world by luring Hall-of-Fame coach Kim Mulkey to come and coach the LSU women’s team.  Mulkey, who was raised in nearby Hammond, Louisiana and attended Louisiana Tech, boldly announced that she intends to take LSU to a national championship.

“That’s what I came here to do!” Mulkey said.

You can picture a big smile on AD Scott Woodward’s face after she said that.  He wants all of his coaches to be totally focused on pursuing championships.

This also meant that Scott Woodward had replaced two likeable but faltering coaches whose most recent teams had disappeared from the national championship conversation.

Lest we forget, LSU’s last three football coaches (Nick Saban, Les Miles, and Ed Orgeron) have all won a national championship in the past two decades.

When you start hearing names of potential hires for the LSU head football coach, here’s a little advice to remember.

If that person hasn’t either won a national championship or has developed a team capable of competing for one, they are probably not likely to be the next coach at LSU.  Let’s run down a few of the biggest names:

Urban Meyer (NFL Jacksonville Jaguars) – Meyer is a perpetual malcontent with a growing amount of off-the-field personal baggage (like Orgeron).  No way.

Lane Kiffin (Ole Miss) – Like Jimbo Fisher, why would he leave one SEC school to coach at another one?  At least Fisher has won a national championship and coached at LSU before.  While Kiffin has an impressive football resume, he can be perceived by many fans as an immature jerk.  Get the popcorn ready?  No thanks.

Joe Brady (Carolina Panthers’ offensive coordinator) – Brady was LSU’s quarterback guru during the 2019 national championship season.  He is young, talented, but quite inexperienced.  He had a chance to bond with AD Scott Woodward for one season, though.  Though he might be on the radar, selecting Joe Brady for this job would be a big stretch.

Deion Sanders (Jackson State head coach) – Don’t laugh, but many in the Bayou State think Deion would be the greatest recruiter in Tigers’ football history.  Perhaps, but he hasn’t established enough of a track record as a football coach yet.  Not gonna happen.

Take a good look at the list above.  There are some terrific coaching names in my list.  Don’t be surprised if you hear about a few more title-hungry coaches soon.  Why not?  The LSU athletics director will fully support your efforts as long as you are focused on building and winning more national championships.

If your name is Scott Woodward, you already know that it’s not a matter of money right now.  You have plenty of that along with the backing of your wealthiest alumni and donors.

This is like being able to go out and purchase any new car you like from any car dealer in the country.  You don’t have to worry about how to pay for it.

LSU’s Scott Woodward literally has an open checkbook.  His job is simply to find the coach who is most likely to bring your alma mater one or more trips to a national championship game within the next 3-5 seasons.  The money will take care of itself.

I think the finalists will come down to Jimbo Fisher (who really doesn’t excite most LSU fans as much as the national pundits might think), Mario Cristobol (whose recruiting skills WILL excite most LSU fans), and Luke Fickell (whose on-field success at Cincinnati is quite impressive and reminds me of a certain former Boise State coach who Scott Woodward lured to the University of Washington).

Any of my top three coaches would excite the fans and sell plenty of season tickets in the Bayou State in 2022.  It should also keep more of Louisiana’s most talented recruits at home to play college football at LSU.  Cha-ching!

LSU fans should trust Scott Woodward with this hire.  This gentleman has proven to be a great recruiter of exceptional coaching talent.  He is also one of their own and truly loves his alma mater.

I have a feeling that Scott Woodward may already know who is going to take this important job.  It’s simply a matter of waiting for the right time to let the rest of us know.

Have patience, Tiger fans.  Your school’s Purple and Goldfinger Athletics Director is not going to disappoint you.