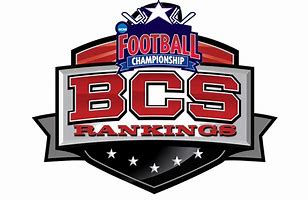 Last week in our initial SwampSwami.com College Football Top 25 rankings for 2021, there were 26 undefeated teams to lead the way.

One week later, there are just 17 unbeaten teams among the 130 NCAA FBS (large division) football schools after the fifth week of the regular season schedule.

This week, ol’ SwampSwami put in the extra time and work to examine each and every one of the 130 FBS teams to determine his ranking of every single FBS team – from #1 all the way down to #130.

It is a daunting task to objectively evaluate every team and then to put a ranking on them.  However, I have some established guidelines and try to follow them when possible.  Here they are:

Let’s take a good example of how biased the AP rankings are toward “name” institutions.

In today’s AP ratings, Florida (which has two losses – albeit to a couple of unbeaten teams in Alabama and Kentucky) is still ranked #20 in their poll.

In my SwampSwami.com College Football 130, I have Florida ranked at #54 this week.  Why the big difference?  Rather than try to evaluate how tough Florida played while losing to a couple of top teams, let’s take a look at who Florida has actually beaten so far this season.

Sorry Gator fans, but two losses are still two losses.  If Florida runs the table for the rest of the season and finished 10-2, their ranking will likely find them in my top ten.

A two-loss Florida should not be a top 25 team when there are 18 unbeaten teams and another 26 college football teams with just a single loss this season.

After losing their first game this weekend, several former SwampSwami.com Top 25 teams have taken a big tumble down the rankings.

South Alabama (last week’s #25 team) dropped all the way to #43 after losing Saturday to Louisiana-Lafayette (now 4-1).  The Jaguars best win of 2021 came against Bowling Green (2-3) by only three points.

Likewise, last week’s #20 team (Maryland) lost their first game this weekend (blown out by our #7 team, Iowa).  The Terps dropped all the way to #37 this week as the group of one-loss teams is quite competitive.  Maryland’s “best” win this year came over 2-3 West Virginia.

You get the idea.  If your team remains unbeaten, they will reside at the top of my weekly rankings.  If that team should lose a game, the primary consideration shifts to the best college football team which they have beaten in 2021 and how well that other team is now faring.

Without further ado, let’s reveal the SwampSwami.com College Football rankings for all 130 FBS teams through the weekend of October 2, 2021: 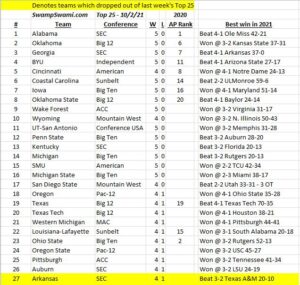 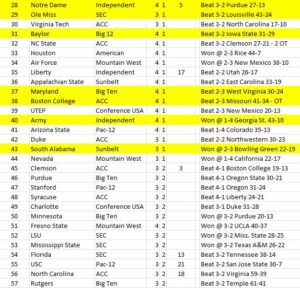 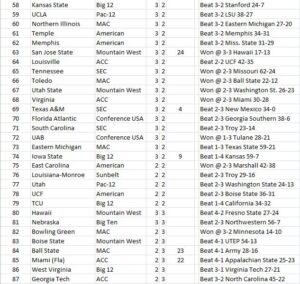 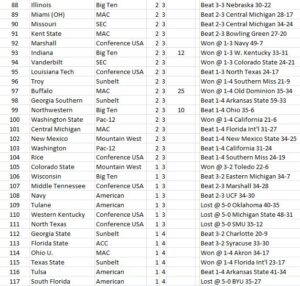