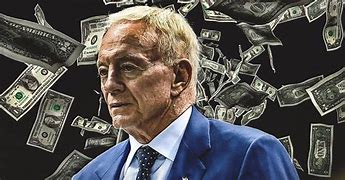 Dallas Cowboys fans should know this tune.  Sing along to the “Ballad of Jerry Jones”!

Come and listen to my story ‘bout a man named Jer’

Played Razorback football with the Hogs up there.

Then one day, after graduating school

He poked holes in the ground right into a gas pool

Well the next thing you know, Jer’s a multi-millionaire.

His kinfolk said, “Time to move away from there –

Dallas, Texas is the place you ought to be”

Once Jerry Jones went to college in Fayetteville to play football as a 185-pound offensive lineman for the Arkansas Razorbacks, his parents moved north to Springfield, Missouri where his father (Pat) built a successful life insurance business.

When Jerry returned from college in 1965 with a bachelor’s degree in business administration, he was named Executive Vice President of his father’s insurance company.  He would return to Fayetteville to obtain a Master’s degree before heading into business for himself in 1970.

In what would turn out to be extremely fortunate for Jones’ future professional football interests, the gas purchase contract between Arkoma and Arkla called for Arkoma’s daily natural gas production to be purchased by the pipeline company at a percentage of the wells’ daily flow volumes (called “take-or-pay”).  Within a few years, the pipeline’s market for Arkoma’s pricey natural gas had declined, and the agreement’s “take-or-pay” clause kicked-in.

By 1986, Arkla decided to end the deal and wrote a check for $175 million to completely buy-out Arkoma Production Company.  As a 50% owner, Jerry Jones had quickly become quite wealthy.  He and his partner, Mike McCoy, would start anew in the energy business once again.

Just two years later in 1988, Jerry Jones would learn that the NFL’s Dallas Cowboys were for sale. Though he would later state that he was initially only interested in a portion of the football team, Jerry Jones would purchase the Dallas Cowboys football team ($65 million) and their home stadium (Texas Stadium) for another $75 million. The $140 million price tag involved Jones leveraging everything he owned in order to buy the team.

Risk (whether it was father’s life insurance business, his years in the energy business, and now pro football) had become all too familiar to the 47-year old Jerry Jones by this point in his life.

Jones saw incredible upside in the value of the Dallas Cowboys, but he needed to cut costs to the bone in every facet of the organization to simply survive the first few years.  Among those jettisoned by Jerry Jones was legendary Dallas coach Tom Landry (a 2-time Super Bowl winner).  The team’s first year under new owner Jerry Jones was an on-field disaster (1-15).  However, the team’s new head coach (Jones’ friend and former Arkansas teammate) Jimmy Johnson was a gem.

The fans returned, the expensive box suites started to fill-up, and things turned around in a hurry for the Jerry Jones version of the Dallas Cowboys.

Meanwhile, Coach Jimmy Johnson’s Cowboys would claim back-to-back Super Bowl wins in the 1992 and 1993 NFL seasons.  Johnson, though, left the Cowboys in early 1994.  He would cite the growing personal differences between himself and confident owner Jerry Jones.

Jones would hire former Oklahoma coach Barry Switzer to take Johnson’s place.  With the great players already assembled on that team, Dallas would win their final Super Bowl in January, 1996.

For the next 25 years, the Dallas Cowboys have not returned to play in the Super Bowl again.  Loyal Cowboys fans are drooling for a chance to return to the NFL’s championship game for the first time in a generation.

Why haven’t the Dallas Cowboys regained any of their magic last seen 25 years ago?

Most Cowboys fans would cast the blame at Jerry Jones.  Jones is one of the few NFL owners with actual college football experience of his own.  However, his hands-on approach to all facets of the Dallas Cowboys football operations may have resulted in a number of unintentional blunders, too.

Owner Jerry Jones has placed his own family in charge of most everything to do with the Dallas Cowboys except coaching the football team (stay tuned – that could be coming next!)

In addition to being the owner, Jerry Jones also refers to himself the team’s President and General Manager.  According to the Dallas Cowboys’ website, the other executives for the NFL team are as follows:

Notice any patterns here?  Though the Jones family might be great, mediocre, or lousy in their respective roles, it’s safe to say that any football coach or player within the Dallas Cowboys organization might want to be careful saying anything negative about the team’s owner.

This week, the Dallas Cowboys announced a contract renewal for starting quarterback Dak Prescott.  The former fourth round pick from Mississippi State signed a new $162 million 4-year deal which included a $66 million signing bonus (yes, for simply signing the contract) and will pay him an average of more than $40 million per season.

Dak’s new deal with the Cowboys will pay him a whopping $1 million bonus for being the starting quarterback if his team WINS the Super Bowl.  With $66 million already in the bank for doing nothing, his new Super Bowl bonus is laughable.

This contract makes Dak Prescott the second highest paid player in the NFL behind only Patrick Mahomes of the Kansas City Chiefs.  For comparison, Mahomes has won a Super Bowl ring (2019) and just played in his second Super Bowl game in February.

What is Dak Prescott’s playoff record?  He is 1-2 in his three playoff games with Dallas over his first five seasons.

For reference, 42-year old Tom Brady (now with 7 Super Bowl rings) was paid $25 million (all guaranteed) this year to play in Tampa Bay and led his team to the NFL Championship.

How about Aaron Rodgers (one Super Bowl title) in Green Bay?  His average pay is $33.5 million.  That’s not exactly chicken feed.

Though Dak Prescott is a very nice young man who played high school football in the northwest Louisiana town of Haughton (population 3,454), the former QB of the high school Buccaneers may now be wealthy enough to buy the entire town!

Is he worth it?  Jerry Jones apparently thinks so.

The Dallas offense wasn’t the big problem this season (14th out of 32 NFL teams).  Dallas’ banged-up no-name defense ranked #23rd last season.  In all six of Dallas’ wins, the team scored 30 or more points.  The Cowboys defense must be able to do a better job to give the team a better chance to win in non-shootout games.

That leaves (theoretically) $105 million of salary to split among the other 50 players.

The pay for the star players on the Dallas Cowboys roster resembles that of an NBA team.  The big difference, though, is that basketball requires only five players on the floor at a time, while an NFL team takes 22 starters (eleven each on offense and defense).

Who agreed to pay Dak Prescott, Amari Cooper, and Ezekiel Elliott these big money deals?  You got it – Jerry Jones.

No one can argue about the success which Jerry Jones has experienced in boosting the worth of his $140 million investment in the Dallas Cowboys since 1988.  The team is now worth an estimated $6 billion.

That’s great for Jerry Jones, his family, and a few fortunate players on the Dallas Cowboys team.

There’s no doubt that Jerry Jones has succeeded in various business ventures.  Sometimes you need both luck and skill.  He’s obviously had both.

For Dallas Cowboys fans who haven’t seen their favorite NFL team play in the Super Bowl for more than a generation, the outlandish new contract for quarterback Dak Prescott gives fans one more reason to believe that the owner himself (though well intended) simply doesn’t realize that he may be the team’s biggest obstacle in returning to the winner’s circle once again.