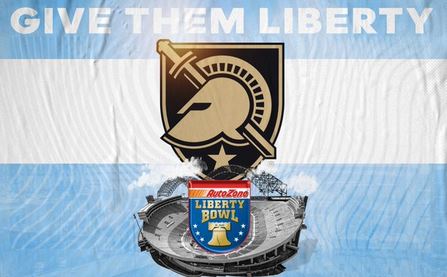 ‘Twas the month before bowl picks and across this great land,

The Army Cadets had six wins and a bowl bid in hand.

To Shreveport they’d march – to the Independence Bowl.

From West Point to the bayous, over hills and through dales,

The Army’s proud history would not allow these Cadets to fail!

No matter the opponent, Army will show up and fight,

‘Cause the word “quit” isn’t known to the brave Black Knights!

Then many weeks later – after Thanksgiving had passed.

Army downed rival Navy and got to sing their Alma Mater last!

In a final game left, against the Powder Blue Air Force, we’d see

Who would take home this year’s Commander-in-Chief Trophy!

But they drove to the goal line and faced fourth down and one!

Coach Jeff Monken pondered, “How can we punch this ball in?

Should we pass the ball and surprise those Air Force blue men?

No, we’ll run it right up the middle and dare them to stop us!”

So Army handed it to their big 260-pound fullback-turned-bus!

He blasted into the end zone as his teammates shouted with glee,

The Army would now take home that gigantic 170 pound trophy!

The Army’s dream season would continue – one more game to get ready.

The Indy Bowl in Shreveport!  Umm – we can taste that gumbo already!

“We’re in our bowl game”, the Cadets exclaimed as they watched on TV,

The match-ups for 2020 bowl selections were released for all to see.

Wow!  Look!  The Georgia Bulldogs are matched with unbeaten Cincinnati!

As the pandemic caused some teams to shut-down for the year,

Many bowl games were unable to find two teams which to cheer.

As each bowl game and their match-ups were shown on ESPN,

Some teams with really bad records were drafted – just to fill-in!

There goes 3-7 Arkansas to Houston to play in the Texas Bowl.

While 3-4 Houston heads to the New Mexico Bowl?  How droll!

The Army kept patiently waiting for their opponent’s name to be called,

Why was the Independence Bowl Committee disappearing down the hall?

As the picks for other bowls kept coming in, the silence was eerie and odd.

Surely ONE Pac-12 team would rise up and accept the challenge of playing,

Instead, Army watched in horror as Pac-12 teams each said they were bailing!

Who could pass on a chance to Army play on a post-Christmas date?

Why not Wazzou, Southern Cal, Utah, or UCLA?

Surely one of those Pac-12 teams would come out and play.

Then each Pac-12 team played their COVID card and started wailing.

Was it Army’s wishbone offense or from Shreveport they were high-tailing?

Saluting the US and college football yearly with two great teams in the mix.

The Independence Bowl has been played 44 straight years – since 1976.

As the other bowls kept digging deeper to find teams to play in their games,

The I-Bowl had 9-2 Army so the Pac-12’s desertion really looked lame.

The Shreveport bowl committee said that they searched far and wide,

But no other teams could be found as they begged, pleaded and tried.

There were 14 other bowl games unable to fill their rosters that Sunday,

There were simply not enough college football teams left willing to play.

What about 9-2 Army?  The Black Knights had already been invited.

The team had posted two straight big wins, and they were really excited.

A Pac-12 mass “sick-out” left Army and the I-Bowl to stand in the lurch,

Perhaps the best chance for Army’s bowl game now would be praying in church!

They had the Commander-in-Chief trophy in hand but no bowl team to play them,

Said Coach Jeff Monken, “Don’t say no to the Army!  We deserve a bowl chance.

We’d love to play in Shreveport”, but the I-Bowl had no partner for our dance!”

The Army AD Mike Buddie backed-up his team as he stated aloud,

“These young men haven’t quit all year, and we surely won’t quit now!”

Most other bowl games filled slots with teams from across this grand land,

But America’s favorite 9-2 darlings?  Out in the cold…nowhere to stand.

Then a miracle happened for the Black Knight Cadets from West Point, New York

Tennessee opted-out of the Liberty Bowl.  The bowl invited Army! Pop the corks!

The Black Knights are thrilled to be coming to Memphis and playing football next week.

With jazz music and tasty BBQ pork which they’ll most certainly eat.

Jolly ol’ St. Nick came through for the Army and their Christmas bowl wishin’.

Our country’s next group of leaders trained hard for this season’s mission.

The Army Cadets went from left-out to bowl bound.  It was nearly a crime.