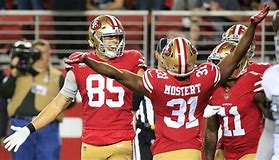 The Super Bowl is coming in two weeks!  After Sunday’s AFC and NFC Championship games, this year’s professional football finale will be notable in a number of ways.

The biggest one is the list of long-time NFL quarterbacks who will not be in the line-up when the AFC’s Kansas City Chiefs kick-off against the NFC Champion San Francisco 49ers.

Coming up in two weeks at this year’s Super Bowl, casual fans will not find such NFL mainstays such as Tom Brady (age 42), Aaron Rodgers (36), Drew Brees (41), Eli Manning (39), or Big Ben Roethlisberger (37) at the helm of either football team.

Things are changing quickly in the NFL this post-season.

Sadly for Packers’ fans, the “real” Aaron Rodgers didn’t show up until the second half on Sunday afternoon after the 49ers had seized control of the game in the first half leading 27-0 going into halftime.

Though Aaron Rodgers still has a lot of talent, his uninspired play in 2019 has been hard to watch.  He appears sleepy and lethargic both in the huddle and on the sidelines.  He wasn’t exactly a fiery leader in his younger days, but Packer fans may wonder if their quarterback spends too much time these days doing insurance commercials instead of working on his game.

Aaron Rodgers and the Green Bay Packers (now 14-4) were blasted back to winter in Wisconsin by a 15-3 San Francisco 49er team that finished 4-12 just one year ago!

How did this happen?

For San Francisco, you have to give much of the credit to a new management team which has quietly drafted and developed a group of solid young players.

It’s rather unusual to move immediately from the broadcast booth to running an NFL franchise, but that’s what happened next for John Lynch in January, 2017.

Nearly all of Lynch’s NFL draft picks in the past two seasons are either starting or contributing to the 49ers on the field.  San Francisco has added an assortment of talented free agents including quarterback Jimmy Garoppolo (from New England) and safety Richard Sherman (from Seattle).

Just who is Raheem Mostert?  After playing college football at Purdue in the Big Ten, Mostert went undrafted in 2015.  He signed and was cut by the Philadelphia Eagles, Miami Dolphins, Baltimore Ravens, Cleveland Browns, New York Jets, and Chicago Bears in just his first two professional seasons!  After signing with San Francisco two years ago to be a returner on special teams plays, Mostert blossomed in San Francisco this year and has rushed for nearly 1,000 yards and a dozen touchdowns this year.

The relatively unknown running back, Raheem Mostert, is on the verge of winning a Super Bowl ring, while six other NFL teams are left to scratch their heads and wonder why they let him get away.

In the nation’s heartland, the Kansas City Chiefs are returning to the Super Bowl for the first time in 50 years.  In 1970’s big game (Super Bowl IV), Kansas City legendary quarterback Len Dawson was an afterthought as the Chiefs’ defense held each playoff opponent to less than 10 points each game.  That’s a record which still stands fifty years later.

Linebacker Willie Lanier along with defensive tackles Buck Buchanon and Curley Culp (all Hall-of-Famers) led that Kansas City team to a 23-7 pounding of the Minnesota Vikings in the 1970 Super Bowl.

Fifty years later, the Kansas City Chiefs are led by a young gunslinger quarterback named Patrick Mahomes.  The former Texas Tech quarterback has blossomed in the NFL and won the league’s MVP in the 2018 season with a remarkable 50 touchdown passes and over 5,000 yards via the air.  Alas, last season’s Chiefs lost to New England in the AFC Championship game.

Kansas City’s offense is just as potent this season as their defense was back in 1969 and 1970.

On Sunday, Kansas City played the AFC Championship game against the surprising Tennessee Titans.  Tennessee was a wild card team this year (finishing only 9-7) but had defeated both Houston and New England on the road in the first two rounds of the playoffs.

Tennessee jumped out to an early 17-7 lead in Kansas City yesterday, but Patrick Mahomes led the fast-striking Chiefs offense to a convincing 35-24 victory.

This year’s Super Bowl will feature a lot of new faces to the millions of television viewers watching the game.

San Francisco’s Raheem Mostert and Kansas City’s Patrick Mahomes are part of the NFL’s first significant changing of the guard in the past two decades.

The league’s style is changing fast.  The smartest NFL teams will make the necessary adjustments to compete for championships in the years to come once the league’s older stars have faded away.

This year’s Super Bowl will begin to usher new faces and, perhaps, a bright new “Blue Skies” sunny day for the NFL for several years to come!