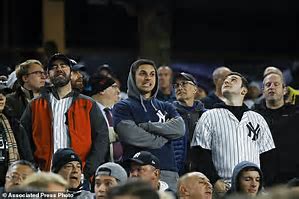 In Thursday night’s Game 4 of the American League Championship series between the New York Yankees and the visiting Houston Astros, several hometown Yankees fans hurled some very personal insults at Astros starting pitcher Zack Greinke while he warmed-up in the bullpen prior to starting the game.

Yankees fans, well known for their boisterous behavior to give their beloved home team any possible advantage, ramped-up from a familiar parody of “You stink” to deliver a much more personal type of insults aimed at the Astros pitcher.

The 35-year old Greinke has admitted that he suffers from a personal anxiety disorder and depression.  While the Astros pitcher was warming-up prior to Thursday night’s Game 4, a group of Yankees fans blasted sarcastic comments about his condition and medications. The goal of such chants (including a few about his Mother) are designed to get the pitcher thinking about something other than the game at hand.

Greinke started the first inning in New York by allowing three bases on balls (giving up one run in the process).  However, his pitching steadied after that, and the Astros pounded the Yankees 8-3 to grab a 3-1 lead in the ALCS match-up.

After the game, Greinke said “I didn’t hear anything”.

Earlier in the series, Houston outfielder Josh Reddick reported that zealous Yankees fans had pelted the outfield with plastic water bottles and a few baseballs.  Astros manager A. J. Hinch said that he will pull the team off the field if Yankees fans do that again.

Maybe the Yankees fans should cool it as they are now 0-2 at home during the series heading into Friday night’s Game 5.

If you play for the home team, it is great to have the spirit and passion of your fans behind you.  Sometimes, though, there is a fine line between supporting your team and having fun and becoming a nuisance or problem.

On Saturday in Starkville, Mississippi, the LSU Tigers football team will be serenaded by 65,000 Mississippi State fans loudly ringing cowbells to cause confusion and distract the visiting players between plays.

In Baton Rouge, though, the LSU student section has been known to spew a few unfriendly chants of their own toward visiting teams as well.

Why did he do that?  He said that his friend was losing a bet once LSU pulled away to win the game 42-28, and he simply wanted to stop the game to save the bet

The Baton Rouge police treated the threat as legitimate and promptly responded.  Fortunately, the game continued and the 103,000 fans didn’t appear to know about the threat.

Yes, some fans can be really that dumb.

Twenty years ago in the “City of Brotherly Love”, Dallas Cowboys wide receiver Michael Irvin took a severe shot to the head and neck from Philadelphia defensive players and laid motionless on the surface of Philly’s artificial turf.

Though the injury effectively ended Michael Irvin’s football career (he is just fine now), it cemented Philadelphia’s fans as among the most cruel and fervent in all of sports.

Duke University’s fanatical basketball fans (affectionately known as “Cameron Crazies”) are smart and do their homework prior to every home game.

In a game against Brown University, the fans chanted “UPS! UPS!” when the team was being introduced prior to the game.  Late in games against in-state rival North Carolina State (an agricultural school), they will chant “Start the tractor!” near the end of the game once victory is assured for the home Blue Devils.

Several years ago, a talented but overweight college basketball player from Florida State was greeted by Cameron Crazies with chants of “Please don’t eat me!” and “Hey, Hey, Hey!” when he went to the free throw line.

Funny?  Yes, but enthusiastic fans walk a fine line in support of their favorite team.

When the pressure is rising and alcohol increases in their system, some fans may resort to desperate measures in order to boost the home team.

Fans hurling plastic water bottles or other objects at opposing players can be quite dangerous. Spewing personal insults may feel creative and sound funny to some fans.

Neither usually produces the desired results.