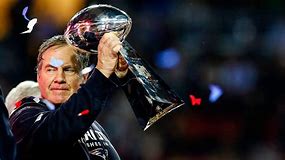 The 66-year old football coach has been running the show in New England for 18 seasons and has only missed the playoffs three times (the last time was ten years ago in 2008).

Though I didn’t watch last weekend’s Super Bowl game due to my commitment to participating in the Saints’ Boycott Bowl, the Patriots defense forced that other team (who shall remain nameless) to punt the ball eight consecutive times to begin Sunday’s game.

The Patriots’ long-time defensive coordinator, Matt Patricia, left the team after the 2017 season to take the reins in Detroit.  The 2018 New England team defense ranked a pitiful 24th place out of the NFL’s 32 teams.

How did they shut down the NFC’s (fake) Champs on a fast track dome stadium on Sunday?

Simple!  The Patriots trotted out a completely new defense which they had not used all year!   The team from the NFC simply never adjusted well enough to recover in the Patriots’ boring 13-3 win.

Leave it to the “Darth Vader” of NFL head coaches to roll-out a brand new scheme in just two weeks, right?

What makes Bill Belichick such a special head coach?

His undergraduate degree is in Economics from tiny Wesleyan University in Connecticut.

Maybe Coach Belichick is able to harness the secret powers of supply and demand and graph the other team into football submission!

Just for fun, I checked the pedigrees some of the most successful NFL coaches (excluding the coach of that certain team on the West Coast representing the NFC last weekend).

How about the college coaches?

So, let’s take a quick tally:

Business majors comprise nearly half of these successful coaches’ academic pedigrees with Political Science and Health/PE majors scoring two each, along with one Communications major.

Another interesting thing to note is that about half of these coaches attended college at small or mid-sized universities.

There have been eight new head coaches (25%) hired by NFL teams during the past month for the upcoming football season.  Let’s take an academic check of these new selections:

For coaches 6, 7, and 8 above, I was unable to determine their college majors after a lengthy search of the internet.  For purposes of this report, I will refer to them as “Health and PE” majors for now.

In this group of eight new NFL head coaches, five are Health and PE majors with one each for Communications and English.  Only one of these eight coaches has a business degree (Management).

Though this exercise is certainly unscientific and probably has no bearing on the new coaches’ likelihood of future success in the NFL, it will be interesting to see which of these coaches hit the market seeking another job in the next few years.

To what “degree” will business majors continue to remain atop the football coaching fraternity?