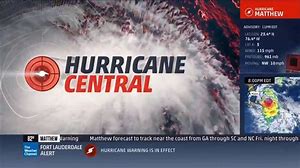 The Weather Channel (which was purchased by NBC in 2008 but is currently in the process of being sold again) has deployed their storm team coverage to the Gulf Coast this holiday weekend for wall-to-wall coverage of the approaching Subtropical Storm Alberto (max winds 50 mph at this writing).

Cue the player introduction music (in Weather Channel vernacular, that is the infamous dramatic “Doom Tune” you will hear during the local weather breaks during a serious weather event)!

On the eastern flank in lovely Panama City Beach, Florida, meteorologist Maria Larosa gets the microphone along the beach while hundreds of happy people enjoy the sun and water at the beach.  It is obvious that some foolhardy families are apparently oblivious to the possible impending doom from the advancing Subtropical Storm Alberto!

To the western side of the storm, there is Paul Goodloe standing in the sunshine with people enjoying the waves behind him in Dauphin Island, Alabama.  I want this job!

Right down the center of the hurricane prediction map fairway, it’s Reynolds Wolf manning his microphone while trying to avoid a sunburn at Pensacola Beach, Florida.  Oh, the humanity of it all!

From the Weather Lab in Atlanta, it is Dr. Greg Postel armed with all the latest weather statistics, nifty maps, and forecast track of Subtropical Storm Alberto.

In basketball terms, The Weather Channel’s Storm Team Coverage has Alberto contained in a zone defense from which he will not escape.

As I watch this dramatic sunshine, surf, and sand coverage on Memorial Day weekend, I ask myself, “Who is paying for these lucky people and crews to go on a paid beach vacation over the holiday weekend?”

Answer:  The sales and advertising department, that’s who!

There are millions of visitors who flock to the gulf beaches during a holiday weekend.  They are interested to know more about the oncoming storm.

Don’t forget the millions of people living along the Gulf Coast from New Orleans to Tampa and their extended families throughout the United States who want to make sure their loved ones are safe.

Those people might need to buy some last-minute supplies from Home Depot or Lowes.  Don’t forget the grocery store chains, battery makers, emergency generators, insurance companies, and all the other companies who want to keep their brand names fresh in their customers’ minds with some timely image-reinforcing advertising.

That’s not the sound of crashing waves, but a distant cash register ringing as The Weather Channel’s Storm Team’s popular coverage adds advertising revenue to the company’s coffers.

But wait, someone is still missing from the tropical storm coverage along the Gulf Coast today.

Jim Cantore has been with The Weather Channel for thirty years and has worked nearly every severe weather event during that time.  As some of the team may be sent back to Atlanta to safer quarters to end their beach coverage, it becomes Cantore Time, baybee!

Jim Cantore along with Mike Seidel, another long-time Weather Channel meteorologist, are the guys wearing the rain gear and goggles who are most likely to be seen hanging onto a pole while the winds try to blow them sideways.  These weather guys have a knack for showing up just when things turn serious.

For me, watching The Weather Channel during a tropical weather event is the equivalent of watching a major golf tournament.  It is initially slow to unfold with increasing drama and pressure as it nears the final hours prior to coming ashore (in this case, a city along the US Gulf Coast).

When you finally see Jim Cantore arrive, it’s like having Tiger Woods or Phil Mickelson in the hunt during the final nine holes of a major golf tournament.

In all seriousness, The Weather Channel has done and continues to do a terrific job of covering unfolding weather events and helps to spread the word to people who otherwise might be oblivious to an oncoming tropical system.  They help save property and lives.

Obviously, I am a fan and, all kidding aside, really value and appreciate their efforts.

For viewers like me, a good tropical storm or hurricane becomes must-see TV.

For The Weather Channel’s parent company, you can take that to the bank!