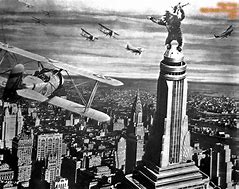 Like King Kong perched atop the Empire State Building, it seemed like an endless parade of professional golf’s biggest stars were lined-up to try to bring down the leader, Patrick Reed, during Sunday’s thrilling finish at the 2018 Masters.

Reed, like King Kong, stood strong atop his leaderboard, beat his chest a few times, and then swatted away all would-be challengers as he grabbed a coveted green jacket by winning the Masters tournament for his first professional major championship.

Hours before the overnight leader and U.S. Ryder Cup hero teed off in Augusta, a conga line of Patrick Reed’s doubters came forward from within the golf media.

As I watched The Golf Channel’s Sunday pregame show prior to CBS’s live coverage, host Rich Lerner asked a trio of former professional golfers whether they thought Patrick Reed had “the right stuff” to win his first major title Sunday afternoon.  Both journeyman Brandel Chamblee and former British Open winner, Justin Leonard, said that Reed would not be able to sustain his lead.  Chamblee even trotted out a graphic of professional golfers who had blown a 3-shot lead entering the fourth and final round of the Masters.

Only David Duval, a former World #1 golfer and winner of the 2001 British Open, said that Reed’s mental toughness in Ryder Cup play would be on display again on Sunday at the Masters and carry him to victory.

The Golf Channel and CBS continued to hype viewers with their hopes that Sunday would be the rightful time for Rory McIlroy (paired with Reed in the final twosome) to win the Masters for the first time and become only the sixth player to win all four of golf’s major championships (joining Gene Sarazen, Ben Hogan, Jack Nicklaus, Gary Player, and Tiger Woods).

The front nine on-air “Rory Rooting Section” of CBS commentators Ian Baker Finch and 3-time Masters winner, Nick Faldo, became even more annoying as McIlroy quickly moved within one shot of Patrick Reed’s lead in the first two holes.  It was like they seemingly couldn’t wait for Reed to fade and get out of Rory’s way.

But then, just like during his legendary 2014 Ryder Cup singles victory over McIlroy at Hazeltine, Minnesota, Patrick Reed, who became dubbed “Captain America” during that Ryder Cup for his gritty style and fierce competitive nature and 3-1-1 record, found his putting stroke and rhythm again.

By the end of the front nine, McIlroy found himself five shots behind Reed.  He looked dejected and all but defeated heading into the final nine holes.

One down for Reed.  Who’s next?

He posted a sterling five-under par 31 on the front nine.  Spieth converted birdie after birdie and briefly tied Reed on the back nine at 14-under par.  Then, Jordan hooked his tee shot into the trees on the 18th hole, settled for a bogey, and dropped a shot to finish at 13-under par.

American Rickie Fowler and his playing partner from Spain, Jon Rahm, then made their own charges on Sunday afternoon before falling just shy of catching Reed.

Rahm found the pond on his second shot into the 15th green (the same pond that defending champion and fellow Spaniard Sergio Garcia repeatedly hit en route to an unbelievable 13 during Thursday’s first round).  Rahm’s dunked ball led to a bogey and effectively ended his chances.

Rickie Fowler, a crowd favorite who was also seeking his first major championship, never faltered down the stretch and posted a birdie on the 18th hole to move to 14-under and narrow Reed’s lead to a single shot with one hole to go.

“Captain America” responded to the pressure again by smoothly driving down the middle on the 18th hole, hitting his second shot into the middle of the green, and calmly rolling in an uphill 3-foot putt for par to seal the one shot victory and grab his first green jacket.

Patrick Reed has always carried an air of cockiness about him.  Many tour players and golf fans don’t care for his sometimes aloof attitude on the golf course.

However, if you look at Patrick Reed’s golf game, he has to maintain a steely composure to grind out victories on tour.

He doesn’t possess a high torque fast golf swing capable of hitting 340 yard drives off the tee like McIlroy (at least until he throws his back out).

He doesn’t putt with the gifted golden touch of Jordan Spieth.

He doesn’t consistently hit laser iron shots into the greens like Rickie Fowler does, either.

But Patrick Reed has one thing that most other professional players don’t have.  Guts.  Abundant quantities of internal fortitude.

Don’t mess with golf’s new King Kong when he is holding onto the final round lead and the odds and media naysayers are stacked against him.  The more detractors, the merrier.

Patrick Reed deftly swatted away all comers on Sunday afternoon and earned his 2018 Masters title.