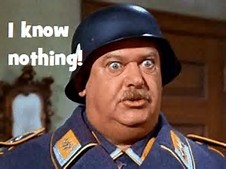 Back in late 1960’s, one of my family’s favorite weekly television shows was Hogan’s Heroes.  Set in Nazi Germany, this clever comedy show featured a group of Americans being held captive behind enemy lines by their bumbling and, to some degree, lovable German captors.

The Americans soldiers could always find a way to encourage their portly German guard, Sergeant Schultz, to turn his head the other way once bribed with his favorite food or trinket.  When quizzed by his equally bumbling commanding officer, Col. Klink, Sergeant Schultz would utter those famous words, “I know NOTHING!”

Fast-forward fifty years later, and that same phrase is being returned to the lexicon this week by a very high profile college basketball coach after he was fired for feigning ignorance (again) about a number of untoward issues involving his university’s basketball program.

Rick Pitino, now age 65, has been a very successful college basketball coach.  He has taken two different schools to the NCAA basketball Final Four (Kentucky and Louisville) and, before that, led tiny Providence College into the Final Four early during his coaching career.  Pitino’s career record of 769-269 meant that his teams have won 74% of the time (one of the best in college hoops history).  No one doubts that this man has been a terrific basketball coach.

He has also never lacked self-confidence, either.  It took a lot of guts to leave the beloved University of Kentucky basketball program and then, after few seasons coaching in the NBA with the Boston Celtics, return to the state of Kentucky four years later to coach against the Wildcats’ bitter in-state rival down the road in Louisville.  The Cardinals’ coach has survived a number of scandals (both personal and professional) by displaying an unflagging confidence in himself.

Coach Pitino obviously knows the secret to success in college basketball involved getting the best players to come to your school and play your style of basketball.  Recruiting those players, though, may have led to his downfall.

You see, Rick Pitino was fired in large part to his involvement in the payment (estimated at about $100,000) of a prized hoops recruit by one of his assistant coaches.  Most assistant coaches don’t have that kind of walking-around-recruiting money, so the investigation centers on money received and ultimately redistributed by the University of Louisville and Coach Pitino as part of an endorsement deal with Adidas sportswear.  A very messy story continues to unfold.

Meanwhile, Coach Pitino went into his Sgt. Schultz routine early this week claiming a lie-detector test would prove that “I know NOTHING!”.  Apparently, the FBI thinks otherwise.  Other assistant coaches across the country and at least one executive with Adidas were charged with crimes in this wide-sweeping investigation into corruption with college basketball recruiting.  More names will be revealed and more heads will probably roll in the months to come.

Though I would be quite surprised if Rick Pitino wasn’t guilty, he certainly isn’t the only college basketball (or football or baseball) coach doing something nefarious like this.  Down here in the South, it has become commonplace to hear about high school programs which recruit athletes with private school scholarships and jobs for family members, among other things.

Corruption in college sports?  Gasp!  Only a fool would think it doesn’t go on at a significant number of universities.  If you followed ol’ SwampSwami this summer, I firmly believe that AAU high school sports are just as corrupt now as some of the big-time college programs.

Don’t get me wrong.  I believe that everyone is responsible for his/her own actions.  If you cheat, you deserve the heat.

On the other hand, why not let the NBA rob the cradle again and select the best high school kids instead of seeing college coaches reach into the gutter to recruit so many flawed kids who have no business in college?  Money, of course!

Rick Pitino will fight like a pit bull in the months ahead as his contract with the University of Louisville is estimated to be worth $44 million.  With big money at stake for head coaches and assistants alike, it’s easy to see how they are tempted to take those chances to grab the egotistical 5-star high school hoops stars.

My, how times have changed!  Coaches weren’t always paid such a premium like this years ago.  Can you name any truly wealthy college football and basketball coaches from the time that Hogan’s Heroes was on television 50 years ago?  Coach John Wooden, perhaps?  Think again.  After winning ten national championships at UCLA, Wooden’s pay in 1975 was $40,000 annually.

It’s all about the big money today.  It is just the way the market works, and colleges are just as guilty as the coaches and the kids.  Until the motivation for money lessens (don’t hold your breath), we are liable to hear from a battalion of Sergeant Schultz impersonators (coaches, administrators, players, businessmen) in the months and years to come.