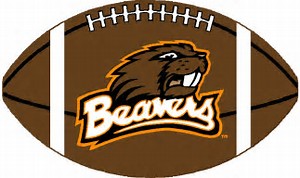 This is one of those stories that really hits home.  Given all of the ongoing (daily) noise we keep hearing about some of the NFL players, the October baseball playoffs, and other sports issues, you may have missed the news this week that Gary Andersen, the head football coach of the Oregon State Beavers, just quit his job on Monday.

The bigger story for many in the media is that Coach Andersen also told the university that he was willing to forfeit any remaining money under his contract (to the tune of over $12 million) for the right to simply walk away.  Immediately.  He said that the school owed him NOTHING.  Nada.  Zip. Zilch.  And, just like that, he’s outta there!

The Oregon State football team has been struggling on the field again this season with a disappointing 1-5 record.  The Beavers traditionally struggle within the Pac 12 to rise above the .500 line but occasionally have a winning team.  Gary Andersen (not related to the former Pittsburgh Steelers placekicker) came to Corvallis, Oregon in 2015 as his 11th coaching stop.  For a 53-year old football coach, that is not particularly unusual as most coaches move fairly often while working their way up the ranks to a head coaching position.

Coach Andersen gained fame by turning around a struggling mid-major program at Utah State and helped the Aggies to a gaudy 11-2 record in 2012.  Opportunity came knocking at Wisconsin after Coach Bielema left for Arkansas.  After a 9-4 campaign during his first season at Wisconsin, his 2014 Badgers went 10-2 but then were blasted 59-0 by Ohio State in the Big 10 championship game.

Seemingly out of nowhere, Gary Anderson announced four days later that he was leaving Wisconsin to take what appeared to be a step-backwards by moving to Oregon State.  According to sources, Andersen claimed that this change of venue was primarily motivated by family reasons.  With a fresh start in the Pac-10, the coach apparently put everything he had into turning around the Beavers’ football program after their former coach, Mike Riley, left for Nebraska.

Unfortunately, things haven’t worked out very well for the intense Anderson this time.  Oregon State’s football team has gone 7-23 during the coach’s tenure, and his frustration with losing apparently bubbled over during the past few months.

On Monday, the school and Riley agreed to a mutual parting.  According to reports about the agreement, the school doesn’t owe Gary Anderson one dime going forward.  The coach bought his way to freedom and away from the stress of being in charge of a major college football program.  In turn, the university can take its time to find the next head football coach with its budget still intact.  That sounds like a win/win to me.

Anderson was quoted as saying, “Coaching is not about the mighty dollar. It is about teaching and putting young men in a position to succeed on and off the field. Success comes when all parties involved are moving in the same direction.”

Indeed!  The stress of being a head coach at a major university can be quite overwhelming.  Honestly, I just don’t know how someone as intense as Alabama coach Nick Saban does it year after year.  Saban obviously doesn’t keep coaching simply for the money (though he certainly is paid quite well).  He always seems to be motivated by the chance of winning national championships more than nearly anything else.

I hope Gary Andersen will take a sabbatical year or more away from the game.  Play some golf.  Do some fishing.  Get plenty of R & R and review where you want to go with the rest of your life.  You had a great run as a football coach, so now it’s time to step back.

Being honest (and fair) with yourself and your employer in a tough situation like this takes a lot of guts.  I, for one, wish him well!