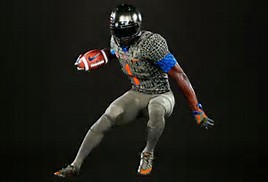 The University of Florida Gators college football team will be donning a new uniform for tonight’s game with Texas A&M down in “The Swamp” of Gainesville, Florida.  According to news reports, the brilliant design team at Nike has taken two years (that’s correct!) to come up with their interpretation of what a REAL Florida Gator uniform should look like.

Be gone with you, Florida blue and orange!  As Nike will show you, a real alligator should look more like that beloved Hanna-Barbera cartoon character from the 1960’s named Wally Gator.  Except…well, Wally Gator actually WAS an alligator and looked like one.

This new Florida uniform (thankfully being worn for tonight’s game only) may not strike fear into Texas A&M’s players, but it will surely cause issues for broadcasters and many men in the stands this evening.  The reason?  This puke-green uniform with orange lettering is quite difficult to see those of us who are red/green colorblind.

You would like to think that, with two years of research, the geniuses at Nike would have taken that into consideration.  According to the National Eye Institute, 8% of men have colorblindness issues with any combination of greens and orange colors.  Count me as one of them.

Remember about 30 years ago when Top-Flite added new optic yellow and optic orange golf balls?  Though you occasionally may still find a few yellow golf balls on the course, the reason why orange golf balls have disappeared (literally) is that many men could not see the ball when landing on a green fairway.

Have you ever seen orange numbers ever used on a football uniform?  There’s a good reason for that, too!  Why alienate 10% of your paying customers who can’t figure out which player just made the play on the field?

Maybe Nike thinks that they can sell enough of these hideous uniforms to gullible Gator consumers to recapture their investment.  Years from now, some Florida fan will put-on this gawd-awful jersey or t-shirt and say, “Remember when we wore these uniforms back in 2017 – for just one game?”